After having such an amazing time at World of Beer last night, we left confused at 8 pm, when they abruptly closed up just as the party was supposed to be starting. Trying to solve the mystery we took to Facebook, and it wasn’t pretty. Many would-be customers were angry. Turned away at the door, they vented and spouted hatred at World of Beer on Facebook as if WOB was a dingo that had just stolen their baby. WOB staff fought back in the nicest way they could, posting apology after apology for the issues and promising to make things right next time. Still no answers. Until…

The Facebook party was back on for Thursday, and everyone was invited to come back to celebrate the grand opening properly! There were promises of prizes every hour, free food, and two firkins for our drinking pleasure. We were already worn out from the night before; after all, going out on a school night is tough for geezers like us. But we rallied, knowing that maybe they would be giving out some Cigar City beer. Besides, we still wanted to solve the mystery of why they closed last night. 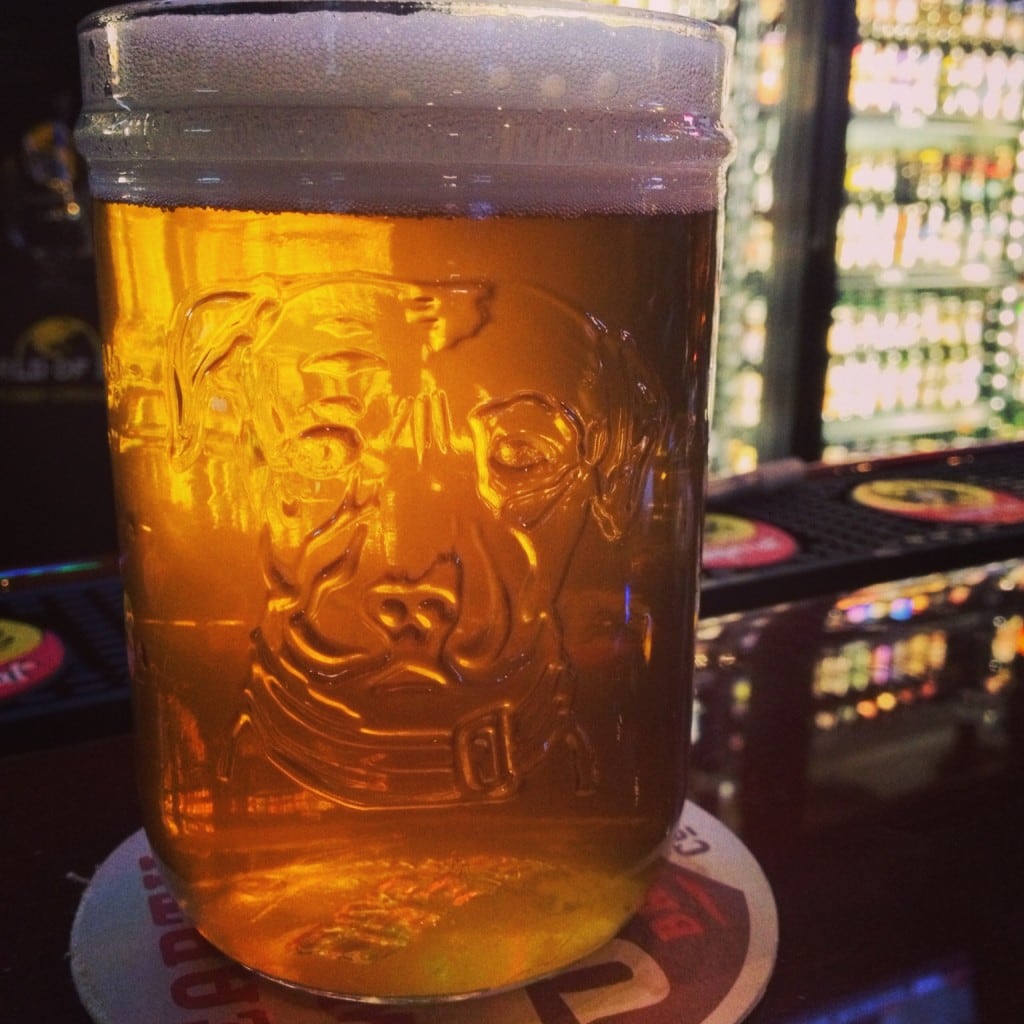 World of Beer is a quick 15-minute drive from downtown, even in traffic, so we arrived just before 5 pm. The crowd was much lighter than the night before, and we took a few seats at the bar. The beer wasn’t free, but we weren’t really expecting to get the “Friends and Family” treatment two nights in a row. Matt was the first bartender to help us and was very nice and attentive. After describing for him my perfect beer, he suggested the Abita Turbodog. It was delicious – a sweet and malty brown ale that I immediately loved. Jeff elected for a hoppy favorite, the Modus Hoperandi by Ska Brewing.

With our seats at the bar, we could really see their impressive beer display. One end of the bar houses all 50 drafts, while coolers full of bottled beer line the rest of the bar. Bottles are grouped by country, with a special section reserved just for Colorado brews. This place really does have a shitload of beer from all around the world. Yowza! 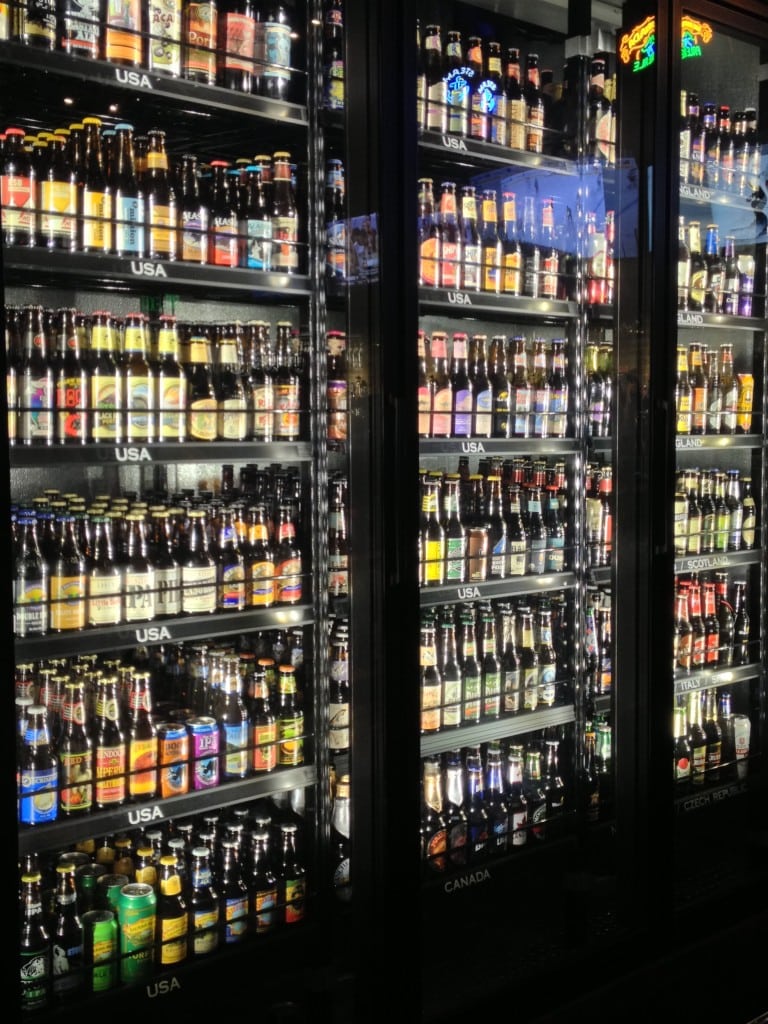 Being at the bar also let us get to know the staff a bit better. They were a little overstaffed, and Matt was cut shortly after we arrived, however, there were plenty of others who were happy and eager to help. We learned that WOB takes their beer seriously. Employees have to study and be tested on their beer knowledge. The extra work is appreciated, as it helps them really make meaningful and knowledgeable suggestions that are pretty spot-on. We also learned that several members of the World of Beer staff came from other WOB locations in Florida, where World of Beer originated. Being a Tampa native, it was great to speak to people from my hometown and see a Tampa business succeed.

We weren’t even done with round one when we decided to get a World of Beer loyalty card. Membership costs $15 but comes with a free t-shirt. As you drink more beers, you get more gifts, and it’s a fun way to keep track of what you’ve had and what you haven’t tried yet. They have an iPhone app that updates instantly when you cash out, making finding your next beer a breeze. We were hooked and each got our own loyalty card. Game on!

The other thing we loved about World of Beer was that it’s drinks only, no food. You can bring your own grub, or order some in from a long list of local restaurants that deliver. A lot of local breweries do it this way, and I sort of love it. After all, if we want to pair our beers with a Chipotle Burrito or some Wahoo’s Fish Tacos, now we can. For this opening night party, they had quesadillas, chips, and salsa brought in from the neighboring Rio Café. Yum!

We had many more beers that night, so I’ll just tell you about our favorites. There was a surprisingly delicious Uinta Brewing Dubhe Imperial Black IPA for Jeff, and a woodsy and refreshing Rogue Juniper Pale Ale for me. We also met our new favorite World of Beer bartender, Mary Jo, who told us that we were going to be her regulars!   Who were we to argue? And while we didn’t win any Cigar City beer, we did win an awesome little gift pack featuring a Breckenridge Brewery sign, WOB bottle koozie, New Belgium lip balm and bike sticker, and a Paulaner tasting glass. Yay!

Finally, and at long last, we solved the mystery of the early closing last night. I have to warn you, it’s kind of anti-climactic, so if you want to believe it was something crazy or sinister, stop reading now & make up your own story. Still reading? Okay, here goes then: improper signage. Yep, they just didn’t have the right signs up, and they were shut down. I warned you it was boring. Kind of silly, too.

In summary, in our first visit to World of Beers Cherry Creek, we fell in love with the beers. With 500 to choose from, there is something for everyone. Plus, they were free, and free beers are always the best-tasting beers. However, it was night two that we were really hooked. The staff was fun and friendly, the vibe was warm and welcoming, and we left with free swag. We couldn’t have asked for anything more.

We’ll be back at World of Beer in Cherry Creek soon and often. Look for us there – we’ll be in Mary Jo’s section. 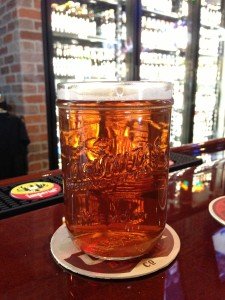 Catching Up with BMT