Another new brewery opened in Denver a few months ago: Former Future Brewing Company. We visited their new brewery and tasting room on South Broadway for their grand opening celebration. Based on the crowds that were there to join us in welcoming this new brewery, we think this new space is going to do great things.

We visited Former Future Brewing Company on their grand opening weekend a couple of months ago and all we can say is wow, were they packed. Their spot on Broadway didn’t include very good signage when we visited, so we only found them by following the constant stream of people filing in for a taste. Once inside their brewery and taproom is small but spacious, and though seats were hard to come by we were easily able to grab a few beers and stand back by their brewing operation.  Their location is cool and hip, with dark woods emphasizing their white brick walls, and a reclaimed plane wing that’s been fashioned into a bar. There was definitely a hipster vibe to this place, with no shortage of beards, hats, skinny trousers, and bow ties. Fortunately, it was also fairly diverse and everyone who worked there was super friendly, despite being insanely busy, so even unhip old folks like us didn’t feel at all out-of-place.

Former Future Brewing Company had four beers on tap when we visited on day two of their grand opening, after already running out of their Robust Porter. The four beers they were pouring included two IPAs, a Belgian Wit and an Oatmeal Saison. We passed on the Wit, but had all the others. My first was the Oatmeal Saison, which was rich and creamy, very malty but not overly sweet, with a nutty oat flavor that was followed with a clove finish. Definitely not your typical Saison, but very unique and full of flavor. Jeff had both IPAs, starting with the Farmhouse IPA. It was a funky IPA with a sour citrus aroma that was nice, but maybe not really our style. We both finished with the English IPA, which had a nice toasted caramel flavor and mildly bitter finish. This was definitely not an American hop-centric IPA, but it ended up being the favorite beer of the day for us both.

The visionaries behind Former Future Brewing Company are James and Sarah Howat, a husband and wife team that wanted to take historical beer recipes and recreate them in new and unique ways. Their motto on their menu board is “Embrace Good Taste” and this shows in their beer as well as their well-thought-out surroundings. The beers they had on tap during our visit really felt like they could have been those enjoyed in the public houses of old but were clearly still incredibly popular in our current Denver beer scene. These beers were so popular, in fact, that just a few weeks after their grand opening they had to temporarily close their doors because they ran out of beer. Apparently, their 4-barrel system just couldn’t produce enough to quench the thirst of their beer-loving fans. They’re open again now and have 6 beers on tap, so we suggest you go try them while they last. 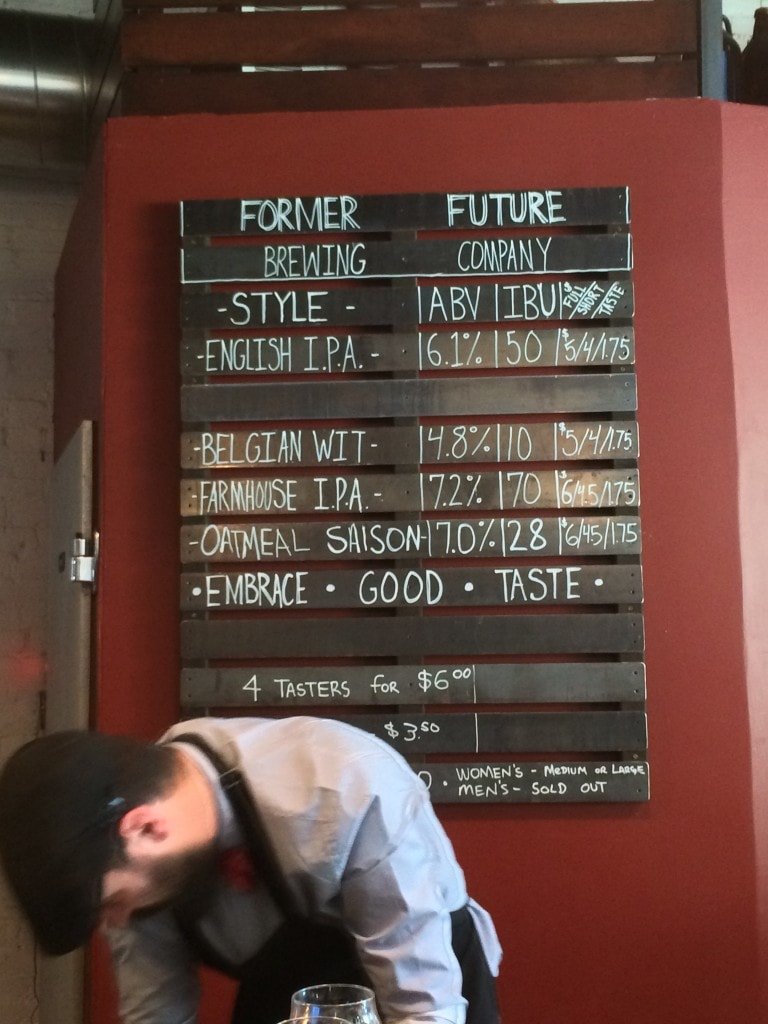 Former Future Brewing Company is at 1290 South Broadway in Denver. Put on your best bow tie and give them a visit.

P.S. Yeah, we know… a Back to the Future reference has little to do with this post, other than it’s long overdue and it’s about a place with the word Future in the title. So indulge us just this once.