We have waited far too to cross Dad and Dudes Breweria off our Colorado Brewery Challenge list.  Truth is, we’ve been here a few times we just never got around to writing about our visits because, to be honest, we left with very little to say.  You see, those first visits occurred shortly after Dad and Dudes Breweria first opened their brew pub in Aurora, and we were not particularly impressed.  During those initial visits Dad and Dudes seem to have a hard time keeping up with demand since they were seemingly often out of the beers we came to try.  Given that we were on the wrong side of their supply and demand issues we usually ended up having beers off their guest taps, and we just didn’t feel good about writing about our experiences.  That is, we didn’t until now. 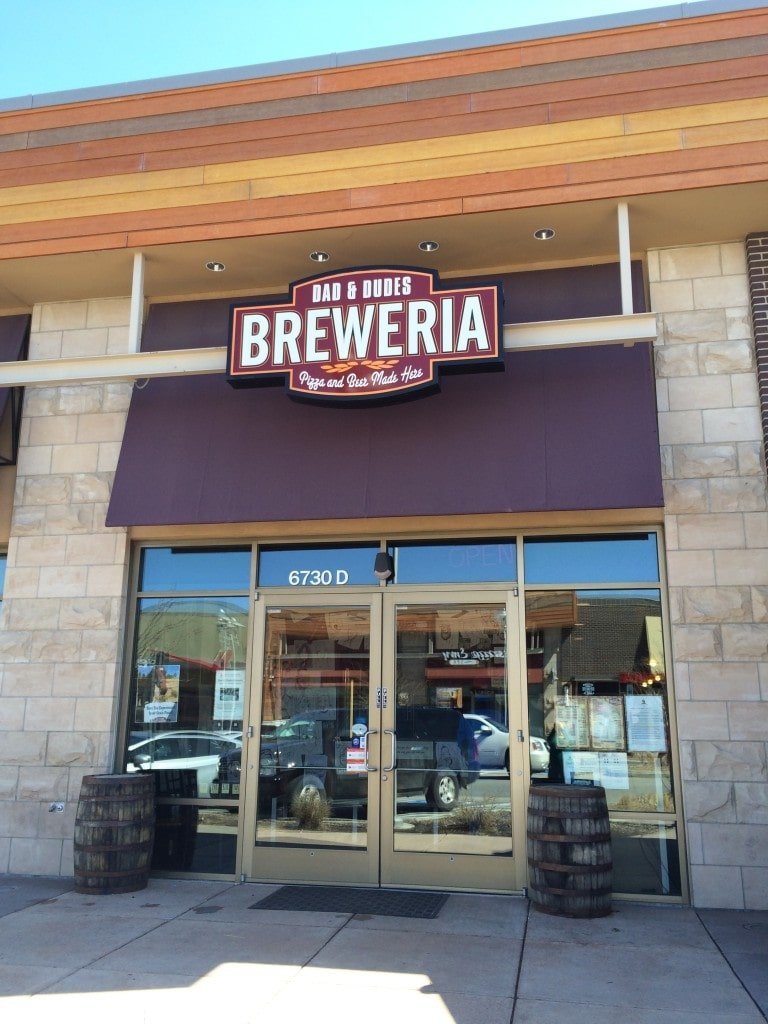 Last month we returned to Dad and Dudes Breweria for a few beers and a snack before doing some bowling at an alley nearby.  Guess what?  This time we were pleasantly surprised not only by their selection but by the quality of the beers they had on tap.  They still have some great guest taps, but this time they actually had more Dad and Dudes beers than they had other varieties.  Score!  They also have a nice variety of styles so we could try more than one.  We started with the Dank IPA, Dad and Dudes standard IPA.  This beer was a great IPA in its own right, but topping the foamy head with a fresh hop was a lovely touch!  It was nicely hopped, but at 65 IBUs didn’t totally ruin our palate for the next beer.

Next up we had the Drink ‘Till She’s Irish Red Ale.  Delicious!  Lately, as we’ve gotten used to more hoppy beers, some reds can taste too sweet in comparison, but this one was balanced nicely.  Since we visited in March this is probably a seasonal brew, but it’s one we’ll seek out again.

Dad and Dudes Breweria’s menu looked as good as their beer.  They seem to be best known for their pizza, with their pizza crust made with spent grain leftover from brewing their ales.  We shared a small, thin crust Margherita pizza, opting for the red sauce instead of olive oil to keep it light.  It was delicious.  The crust was perfectly crunchy and chewy, and the pizza was plenty filling without over-stuffing us.  It paired very well with our brews.  If you’re not into beer or food (weird) Dad and Dudes Breweria also offers a full bar with wine and cocktails.

We are really happy this place has turned it around for us.  It seems like Dad and Dudes Breweria started out so tiny that they had a tough time keeping up with their own success.  The system we saw when they first opened wasn’t much bigger than our homebrew setup!  Fortunately, since business has been good the setup is a lot bigger now, and they seem to be doing a great job keeping up with demand and making more unique sounding brews.  Hopefully, soon they put a little of that effort into their website, since as of today there are still a lot of blanks on their webpage, including on the pages devoted to their Beer & Wine offerings and their “About Us” page. Nit-picky, for sure, and we can do without that info online if they still have great stuff when we walk in the door. If you want to check out their lineup before you visit, try their Facebook page instead of their website, it seems to offer much more up-to-date info on their beer offerings and daily specials.

9 Reasons Why Beer is Good For Your Health