Last weekend we took a road trip to Durango for Ska Brewing’s annual Anniversary Party and Brewers Invitational. You can read about it here. During our road trip we traveled through several great cities – big and small – a few of which had breweries. It seemed rude not to stop, so we did whenever we could. Today we want to tell you about our first stop in Alamosa to visit San Luis Valley Brewing Company. 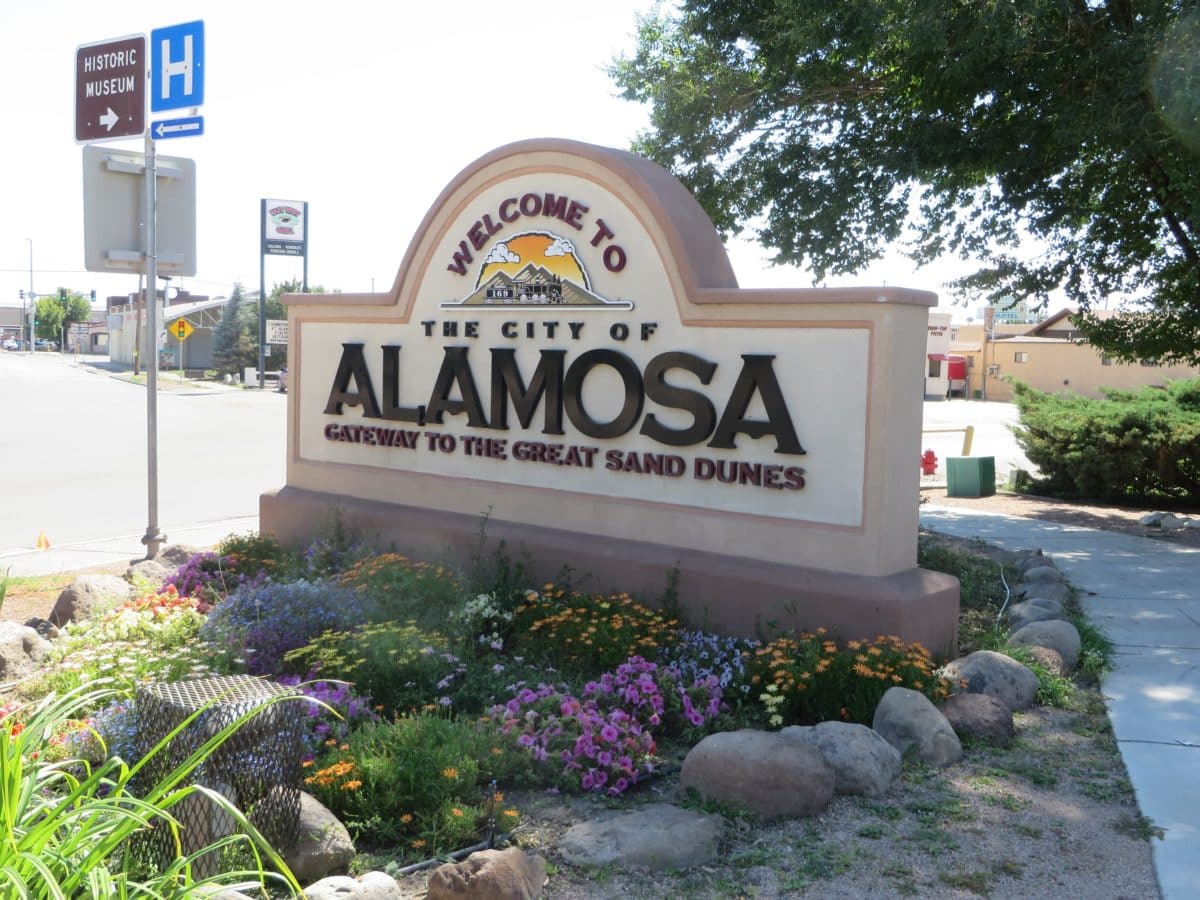 Alamosa is a cute town in south-central Colorado, located in the San Luis Valley. The city was established in 1878 by the Denver and Rio Grande Railroad, and quickly grew to be an important rail center. Nowadays plenty of tourists come to Alamosa to visit the nearby Great Sand Dunes National Park and Preserve, explore the Sangre de Cristo mountain range, or just enjoy the beauty and history of this town nestled along the Rio Grande River. For folks staying in Alamosa, there is no shortage of breathtaking scenery or outdoor excursions.  You can even still enjoy the scenery by train, by taking a ride on the Rio Grande Scenic Railroad to view landscapes and mountain views that are inaccessible by car. 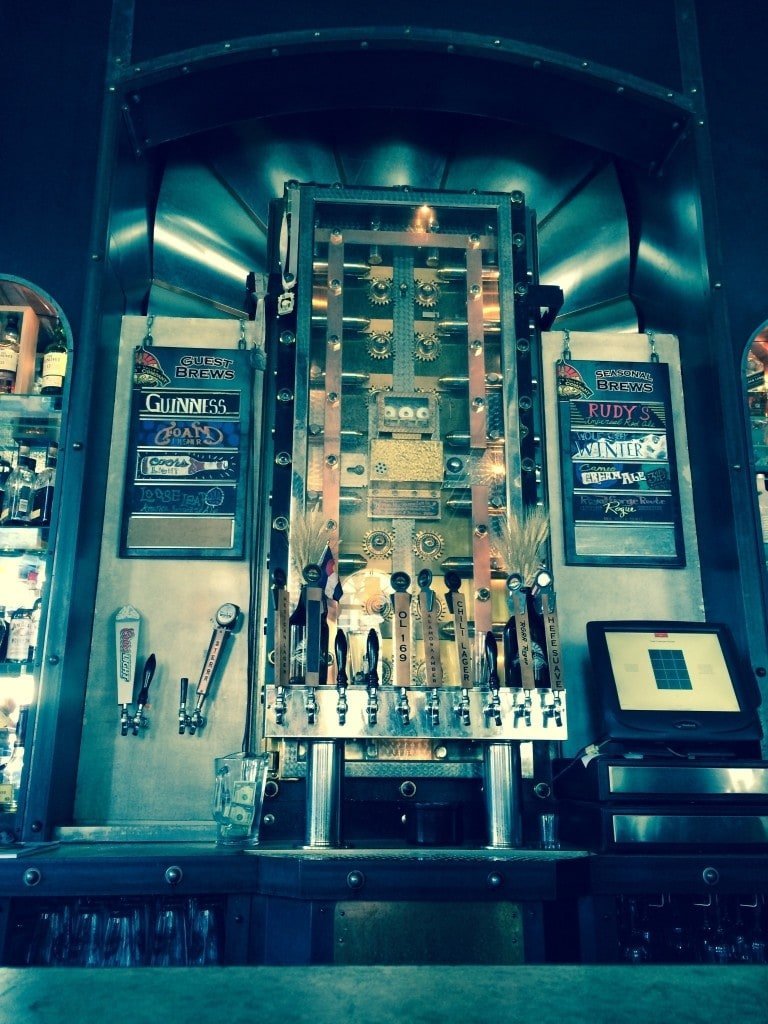 San Luis Valley Brewing had a nice selection of year-round beers, seasonal specials, and guest taps.  We started with two of their year-round offerings: the Grande River IPA and the Valle Caliente. The Grande River was a really decent IPA, with notes of grapefruit and pine it was really refreshing – a good, typical IPA.  The Valle Caliente is a Mexican-style lager infused with hatch green chili. It has a big chili flavor without being too hot, which was really awesome. If you like chili beers, this one is a real winner. Finally, we finished with a summer seasonal, the Royal Gorge Route Rogue. This beer is somewhere on the spectrum between a red and an IPA, with a much more maltier base than the IPA. It was a decent beer, though we both tended to prefer the Grande River IPA as this one seemed much more malty and sweet in comparison. 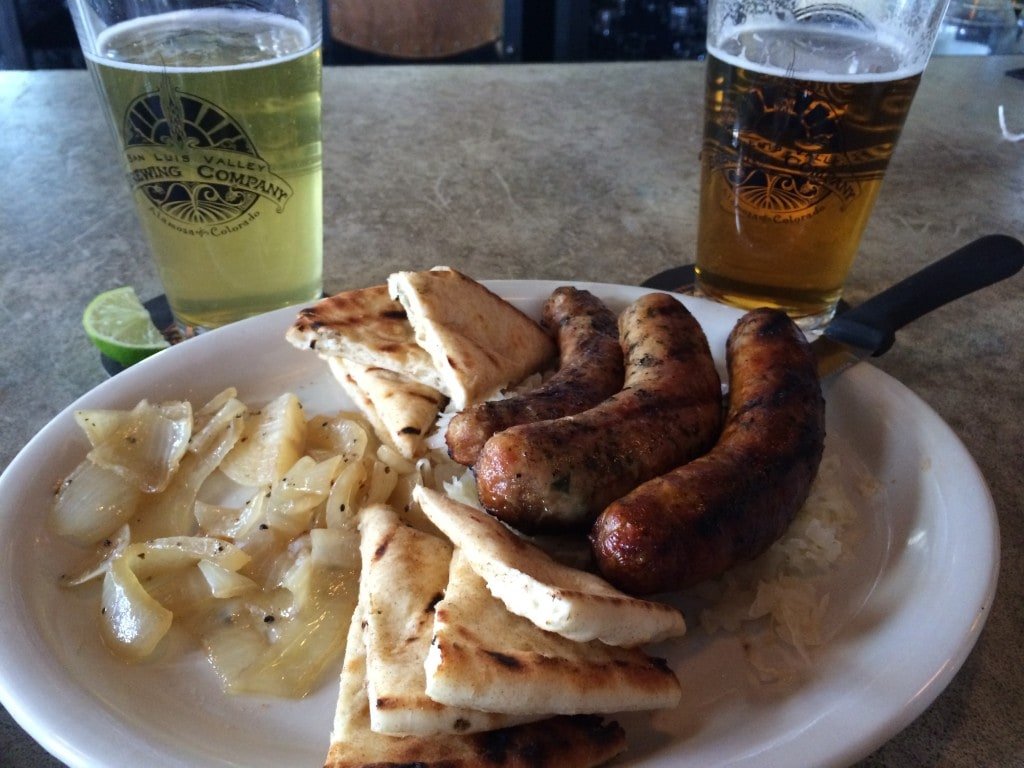 With our beers, we also had some lunch. It was a tough decision since their menu had some great options. San Luis Valley Brewing takes their food as seriously as they do their beer, offering some delicious sounding steaks, salads, sandwiches, and appetizers. We decided on sharing the Sausage Sampler – because what goes better with beer than sausage? Answer: nothing; sausage was made to pair with beer! Given a choice of 3 different locally made, all natural sausages we selected the Pork Bavarian, Chili n’ Chive Chicken, and Andouille Cajun Pork sausages. Served with pita bread, sauerkraut, mustard, and caramelized onions, these sausages were pretty fantastic. All were flavorful, but the Bavarian was our favorite. It seemed to pair best with the sauerkraut, stone ground mustard and beers.

There were some very intriguing businesses around San Luis Valley Brewing Company. First, the owners of San Luis Valley Brewing have recently opened ROAST Craft Coffee and Libations in a space directly adjacent to the brewpub. Here you can get a coffee made from fresh beans roasted on site. If you need something sweet with your coffee there is a Nestle Tollhouse cookie and ice cream shop just across the street. There is also a bar across the road called the Purple Pig Pub that we just have to visit next time. Because how do you pass up a place called the Purple Pig Pub? Answer: You don’t, at least not easily. We had to pass it up, but it was really, really hard. We got a Tollhouse cookie instead to ease the pain.

We really enjoyed our short visit to Alamosa and would love to return when we can do more exploring. San Luis Valley Brewing was cozy and friendly, and served some very good beers and tasty food. We’ll be back next time we’re in the neighborhood. If you’re in Alamosa we hope you check them out and let us know what you think.

P.S.: For those of you who may notice such things, we have a few less photos than normal for this post. We actually snapped a ton of pictures only to learn after we left that there wasn’t a memory card in our camera. DOH! To provide full disclosure we wanted to note that the exterior photo of San Luis Brewing Company, above, was taken during a previous stop in Alamosa during the summer of 2013. Had this photo been taken now, you would have seen the new ROAST coffee shop. The exterior picture of the Purple Pig Pub was also taken in 2013. All other photos are from our current visit. Thank goodness we always take some backups on the iPhone!

The Breweries of Pagosa Springs