The Bacon and Beer Festival returns to Denver for their third year on Sunday, November 16th, and this year’s event looks to be better than ever! Presented by EatBoston and Denver Off The Wagon, this annual festival features everything: Bacon, Beer, and well, that’s pretty much everything. At least, it’s everything that matters.

In all seriousness, the Denver Bacon and Beer Festival is one of our favorite annual festivals, featuring bacon-based dishes from some of our best Denver area restaurants served alongside some wonderful local brews. We attended the festival for the first time last year and it was such a blast we swore we’d never miss it again. The beer selection was top-notch, featuring several selections from each brewery. And the food? Oh Lord, the food! Last year we sampled the gamut of bacon dishes, starting with Oysters with Kombu Cured Bacon and finishing with Bacon Bread Pudding topped with Cap’n Crunch. There was even bacon ice cream! There was so much deliciousness that even with the sample-size portions we wound up with a case of the bacon sweats by the end of the day. It was the best day ever.

This year the festival moves from the Exdo Event Center to The Curtis hotel, an upgrade if only because the festival seemed to have outgrown the space at Exdo. Last year it was elbow to elbow at times, but this year the festival is stretching out over two floors in one room of the Curtis, so you should have plenty of space in-between you and your fellow swine-and-swill loving friends.

If spending an afternoon enjoying countless bacon delicacies and amazing brews makes you feel a little too decadent and over-indulgent, rest assured that you’ll be doing it for a good cause. This year’s proceeds will once again benefit Project Angel Heart and Metro CareRing. That means all those delicious calories are charity, and hardly count. In fact, it would be selfish of you to not go. Don’t be selfish – get your tickets today and come enjoy this boozy bacon fest with us. 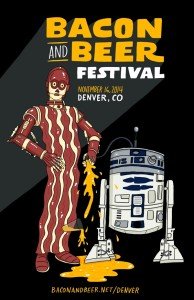 Tickets:  General Admission tickets are $46.50, and can be purchased at http://www.wheretoeat.in/2014-denver-bacon-and-beer-festival/

Hope to see you there. Cheers!

We shared this event with you because it’s one of our favorite annual festivals. We have not received anything from the organizers, sponsors or anyone else for our recommendation.