Do you like beer? How about coffee? Bourbon, too?  If like us you answered yes, then Avery Brewing Company has just the beer for you!

This Sunday, November 16th, Avery Brewing is releasing Tweak, the newest member of their annual barrel series. Tweak is a big 17.81% ABV coffee stout that’s spent 4 months aging in Bourbon barrels. This is a big, bold coffee beer with a kick! Bottle sales will take place in Avery’s Boulder taproom starting at 1 pm. Bottles are $12/each, with a limit of one case per person.

In typical Avery style they are celebrating this new beer with a release party that begins at 11 am, and will feature the following rare beers on draft:

If you won’t be in Boulder on Sunday, or if you’ll be enjoying some Bacon and Beer like us, don’t lose all hope! Avery is expanding their barrel-aging program, which means they’ll be able to send Tweak to many places throughout the U.S.  To see if Tweak will be coming to a location near you, make a visit to the Avery Brew Finder. 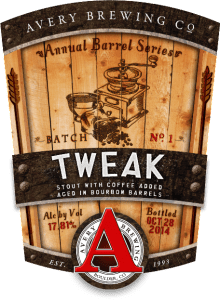 4 New Breweries To Try This Weekend