Crooked Stave, and Why You Should Try Sour Beers

It’s just a few days until Thanksgiving and this year we’ve decided to pass on our typical wine pairings and enjoy some beer with our holiday meal. But not just any beer. This year we’ll be pairing several great Crooked Stave Artisan Beer Project sour beers with our turkey dinner. Much like wine, these tart sours pair well with a rich, savory Thanksgiving meal. Given our love of Crooked Stave – we visited their tasting room twice last week alone – it’s embarrassing that we’ve not yet written about their brewery. However, before we tackle the awesomeness that is Crooked Stave Artisan Beer Project, we want to provide you a bit of information on sour beers in general. So gather around friends, because here comes a lesson in Sour Beer 101…

What is Sour Beer?

No, sour beers are not beers that have gone bad! Sour beers are intentionally tart or acidic beers, and depending on the style they can range from mildly tart to a mouth-puckering sourness. Sours are usually made by allowing wild yeast strains, like Brettanomyces, into the brew, or by introducing a bacteria such as Lactobacillus or Pedicoccus. If the thought of bacteria in your beer makes you queasy, stop being a sissy. Pedicoccus is the same bacteria that helps cabbage ferment into sauerkraut, while Lactobacillus is present in yogurt, cheese, pickles, wine, cider, and a number of other fermented foods. The tart flavor of a sour beer can also be enhanced by introducing fruit into the fermentation or by barrel aging the beer. All of these additions give a sour beer a wild and complex flavor and balance, much like a fine wine. Plus since sour beers often have little to no hops, it’s flavor profile is quite different than your typical ale or lager, making it the perfect style for people who don’t like beer.

Sour beers are a polarizing beer style; you either love them or you hate them. Often people will take that first puckering sip and decide immediately that the style isn’t for them. We know because that’s what we did with our first sour. We took one taste and proclaimed to hate them, steering clear of the style for quite a long time. Then we attended a New Belgium Brewery beer tasting at Denver Brew Krewe, a monthly MeetUp for beer lovers. The New Belgium staff was on site to provide history and tasting notes while we sipped their popular Lips of Faith sour, La Folie. When we each were faced with a full pint of La Folie at the tasting we figured we’d struggle through a few sips to be polite. Then a funny thing happened, we liked it. The first few sips weren’t half bad, and as we sipped more we admitted that La Folie was pretty damn good. By the time we’d finished our pints, we were hooked. Our experience with La Folie gave us the courage to try more sours, and now we have an appreciation and love of the style and seek it out whenever possible.

The lesson here is, if you haven’t tried a sour beer you should give them a chance. If at first, you don’t like it, give it another chance. Try another style, and make sure you really try to appreciate the complexity in the flavors and aroma that make this beer such a delight. Learn from our original mistake and don’t be stubborn, give sour beers a try. You may just find a delicious new favorite.

There are a lot of Colorado breweries who include sour beers in their brewing lineup, including New Belgium, Avery, River North, Trinity, and others. But then there is Crooked Stave Artisan Beer Project, who is at the forefront of the sour movement by focusing almost exclusively on making great Belgian-style sours. Crooked Stave has a pretty strong cult following by beer geeks inside & outside of Colorado. As a matter of fact, the number one question we’re asked when we meet fellow beer lovers from out-of-state is, “Can you get us Crooked Stave?”

Where to Buy Crooked Stave Beer

You can pick up bottles of Crooked Stave at select Colorado liquor stores, but to get the best variety of their beers you need to visit The Source. Literally, you can find Crooked Stave Artisan Beer Project’s uber-cool taproom nestled in the back corner of the hipster paradise known as The Source. Here, Crooked Stave’s shiny stainless brewing equipment sits juxtaposed with the brick walls and high ceilings of this old foundry building, originally built in the 1880’s. The contrast of old and new is the perfect setting to enjoy Crooked Stave beers, themselves being new versions of old styles. There are several regulars in the Crooked Stave lineup, such as the Surette farmhouse ale, the St. Bretta Belgian Witbier, and the Vieille Saison. While they make these three beers on the regular, the batches vary by season and ingredients, making each batch a unique flavor experience. For example, Crooked Stave currently offers a Surette Autumn, brewed with autumnal herbs and spices, giving this batch a strong licorice finish. There is also a St. Bretta Autumn, brewed with citrus which changes from batch to batch, and then fermented on oak foeders. We’ve tried the St. Bretta Autumn in both navel orange and blood orange, and both are incredible.

It’s the subtle and not-so-subtle variations that Crooked Stave makes from batch to batch that brings us back to their taproom so frequently. They also have many other varieties on their ever-changing tap list, so there is always something exciting and new to try. We love the Colorado Wild Sage Artisanal Saison, and the Nightmare on Brett dark sour ale aged in oak barrels. Recently they also had a Mama Bear’s Sour Cherry Pie Burgundy sour ale which was luscious and heavenly, just like a tart cherry pie. Just this past week Crooked Stave kicked off a round of special bottle releases with their Origins Burgundy Sour aged in oak barrels, and they’re planing six more similar releases between now and the end of the year.

Crooked Stave at The Source

Having the Crooked Stave Artisan Beer Project at The Source has some advantages. If you’re hungry you can get take great food from Comida or Acorn, or make yourself a delicious cheese and meat tray at Mondo Market, all just steps away from the taproom. Just don’t expect to see any actual brewing going on at The Source. As the Denver Post reported last week, a variety of challenges has forced Crooked Stave to brew at other locations. They have already begun moving their entire brew system out of The Source, as you can see from their Facebook photo below. The brewing system is moving to their Barrel Cellar location as we speak. Having everything under one roof will eventually mean Crooked Stave will be able to produce a larger volume and bigger variety of beers for their thirsty fans, which is a very good thing. 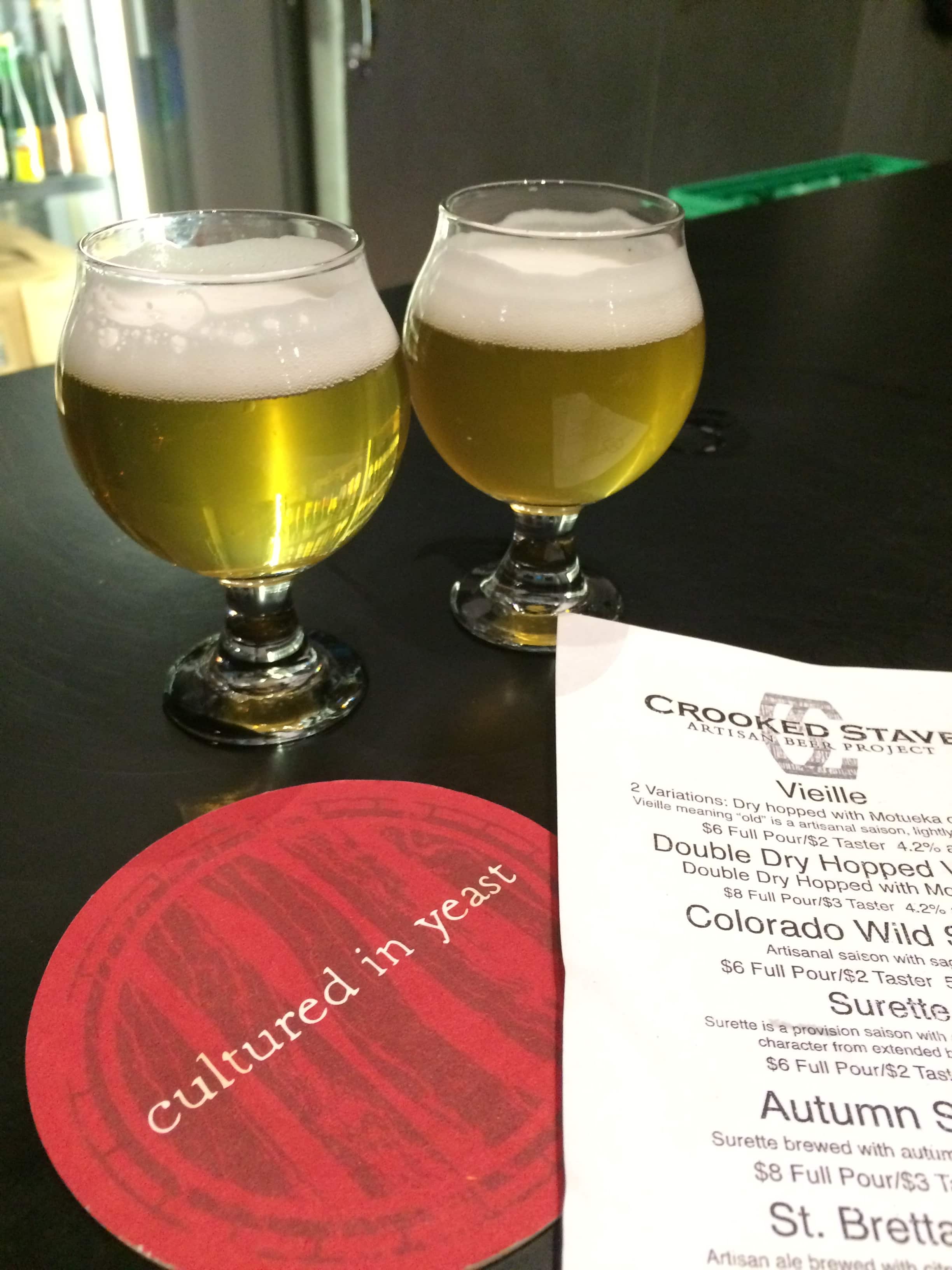 Visiting Crooked Stave at The Source

Go check out Crooked Stave for yourself and see if you can find your next favorite sour beer. Visit the Crooked Stave Artisan Beer Project tasting room at The Source: 3350 Brighton Blvd, Denver CO 80216. Visit them in person, or keep in touch with them online: