This weekend Renegade Brewing Company opened the doors of their new production facility and invited the public to tour their new space. We took this opportunity to stop by both Renegade locations to discuss the big opening, and have some Renegade brews.

Renegade Brewing at The Yard

The new Renegade Brewing at The Yard is on 1st and Santa Fe is just 8 blocks south of their existing brewery and taproom. Renegade signed a lease for the 15,000-square-foot space. Although they’re currently only using half of the space, they plan to be using the full space by the end of the year. Staff on site told us this would take them from a 15 barrel system up to 60 barrels now, with room to expand to 90 barrels.

Click any photo below to enlarge & open slide show:

At the moment the brewing is still happening at the original Renegade brewery at 925 W. 9th Ave in Denver. Once the finish brewing, the wort is transported via large tubs to the new site for fermentation. Eventually, all brewing will move to the new space and the existing location will be used as a barrel-storage cellar. They plan on keeping the existing taproom open, and may even expand the space once more of their brewing equipment is relocated to The Yard.

Renegade Brewing has grown by leaps and bounds since they opened their doors just under 4 years ago. This expansion will allow them to produce more beer and expand on their canned beer offerings. At this time Renegade Brewing distributes throughout Colorado and in Kansas, but their distribution footprint may extend to another state very soon. 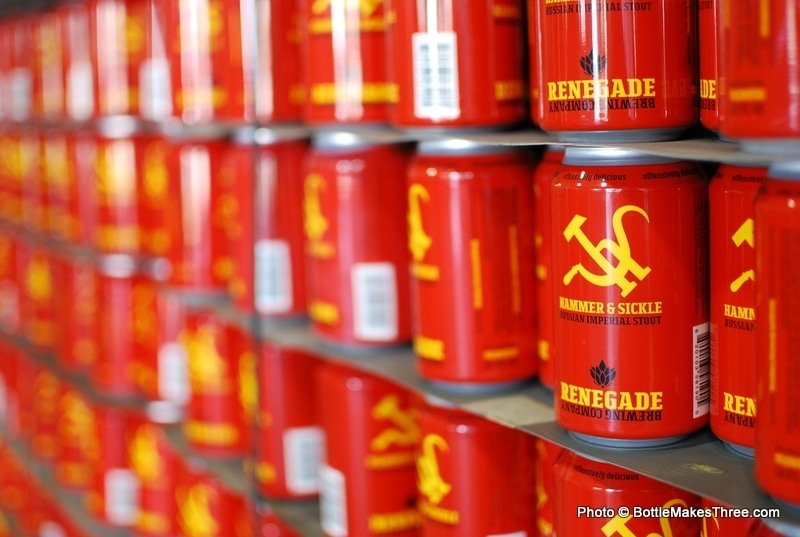 The Renegade Brewery at The Yard production facility is currently only open to the public for tours on Fridays between 4 pm-7 pm, and Saturdays between 1pm-4pm. Currently, there are only four beers on tap for tour visitors at The Yard location. That may change as they continue to expand this new space.

Of course, no trip to Renegade Brewing would be complete without paying a visit to their original brewery and taproom for some beers. We had some of our old favorites, like Elevation and Redacted, as well as some that are new (to us) such as Consilium and Hiatus. We are huge fans of their Hiatus, Renegade’s cold-coffee infused oatmeal ale. Hiatus uses Novo cold-brewed coffee to make a delicious beer that is bold but not too heavy. If you haven’t tasted it for yourself, you should give it a try. It’s outstanding.

In Other Renegade Brewing News

In unrelated news, look for a name change coming this spring to the Renegade Elevation Triple IPA, aka E3. After a legal settlement with Elevation Beer Company, Renegade Brewing has agreed to rename this beer Endpoint. Only the name is changing, so expect to find the same offensively delicious Triple IPA inside those Endpoint cans when you see them hit store shelves later this year.

To learn more about Renegade brewing, visit them online or stop by and check them out in person: