Written by Jeff in Breweries

Last month we put our day off for President’s Day to good use. February 16 was a cold and snowy day, but it was also the day that Avery Brewing Co celebrated the grand opening of their new brewery facility in Boulder/Gunbarrel. We couldn’t think of a better way to enjoy our day off work, so despite the weather, we hit the road to Boulder, and set our navigation for the new & improved Avery Brewing Co

Inside the New Avery Brewing Co

Full disclosure: We never toured the Avery brewery at their old location. Sure, we’ve been to the tasting room in “the Avery Alley” several times, but we never saw the brewery. During our previous visits to Avery we were more interested in enjoying their great beers than we were with seeing where they were created. Besides, the Avery tasting room was small and usually packed, so if we were lucky enough to find a seat we usually just stayed there.

Despite not seeing behind-the-scenes at the old spot, we feel it’s pretty safe to assume that this new location is much, much different. Avery no longer has their brewery spread out over separate warehouse spaces, and they’re not hidden down an alley behind other businesses. The new location is modern, expansive, and beautifully designed. It’s clear that with their new home Avery Brewing is movin’ on up from alley to awesome. 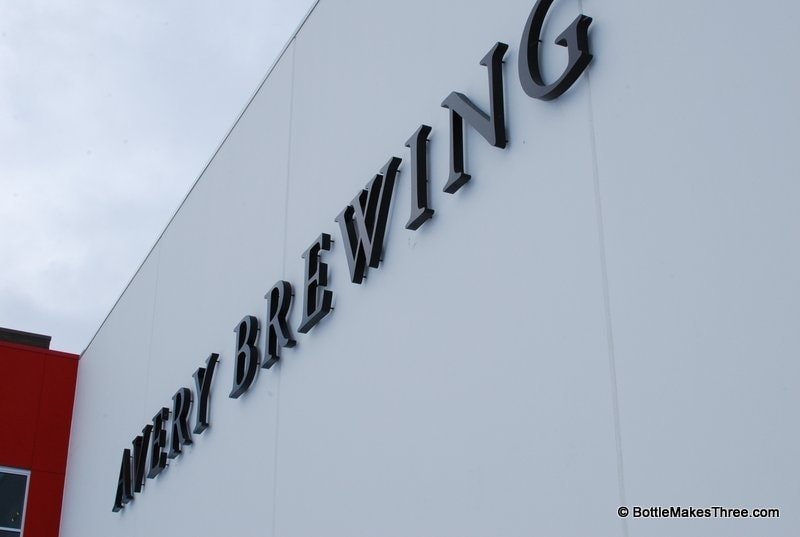 The new Avery Brewing facility is on a 5.6-acre site at 4910 Nautilus Court in Boulder. When we drove up we were instantly taken by the size and feel of this impressive new building. The new location had to be big, as it’s not only home to their state-of-the-art new brewery and taproom, but also includes a full restaurant. The outside of this two-story structure is mostly white and would have blended into the snowy surroundings if not for the red accents and the distinctive Avery font, spelling “Avery Brewing Co.” in huge black letters across the front of the building. Then again, we could have just followed the large congregation of Avery fans flocking to get a look at the new space. Yep, even on a snowy Monday afternoon, the world showed up to christen the new Avery Brewing. 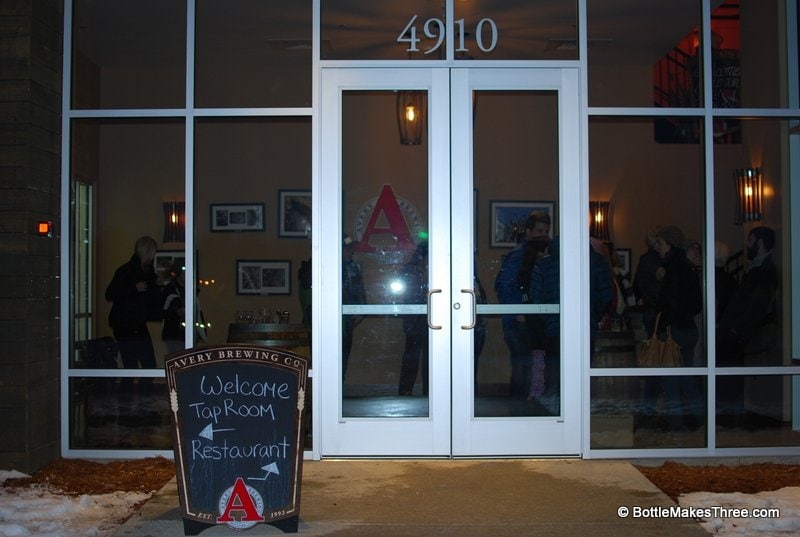 The Avery staff greeted us as we approached the brewery and helped us learn our way around. We could turn left and visit the Avery Taproom, where they had a full lineup of 30+ Avery beers plus a limited food menu. We could go upstairs to get on the list to dine at the Avery Restaurant if we didn’t mind the approximate 2-1/2 hour opening-day wait. Lastly, we could go upstairs, past the restaurant and gift shop to the catwalk that overlooks the brewery, where they were serving a limited lineup of complimentary Avery beers. Decisions, decisions. We decided to head to the place with the fastest moving line – the catwalk – where we could take in sights of the brewery and enjoy some beer. 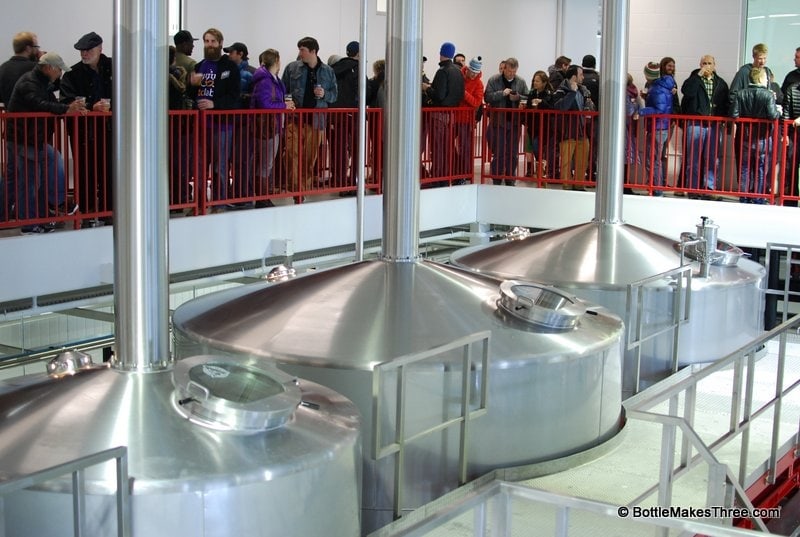 From the Avery catwalk, you can see the entire brewery, and can even see through the glass windows into the offices and lab. We were instantly dazzled by the newness of everything: the shiny brewery equipment, gleaming white walls, spotless floor tiles, all surrounded by accents in Avery red. Though we can’t say for sure, it didn’t appear that anything was brewing yet. The stainless steel vessels and fermentation tanks were all still glistening and new, and the sweet smell of wort had not yet permeated the air. Nevertheless, it was so cool to see this magnificent, brand new brewery, knowing that soon it would be bustling and busy, creating all sorts of great Avery beers. We heard that this new facility will double Avery’s production capacity almost instantly, helping them expand to new markets. There is also still plenty of extra space for future growth, assuring lots of future Avery beers for thirsty craft beer fans far & wide.

Speaking of beer, it was about time we found some, and we didn’t have to look far. For the grand opening Avery set up a bar in the back corner of the catwalk, where they were serving up several popular Avery brews. There were a lot of people to serve, but the Avery staff was distributing beer in cups and cans so quickly that despite the crowd we never had to wait in line. They had many of our favorites, like the Maharaja Imperial IPA, Lilikoi Kepolo, Gored, and of course the ever-popular Avery IPA and White Rascal. Everyone on the Avery team was friendly, helpful, attentive and seemed genuinely thrilled to be showing off their new home. They really made this event a huge success, and we were as impressed with them as we were with the brewery. Well done, team Avery. This was a kick-ass grand opening party, and that is not just the free beer talking. 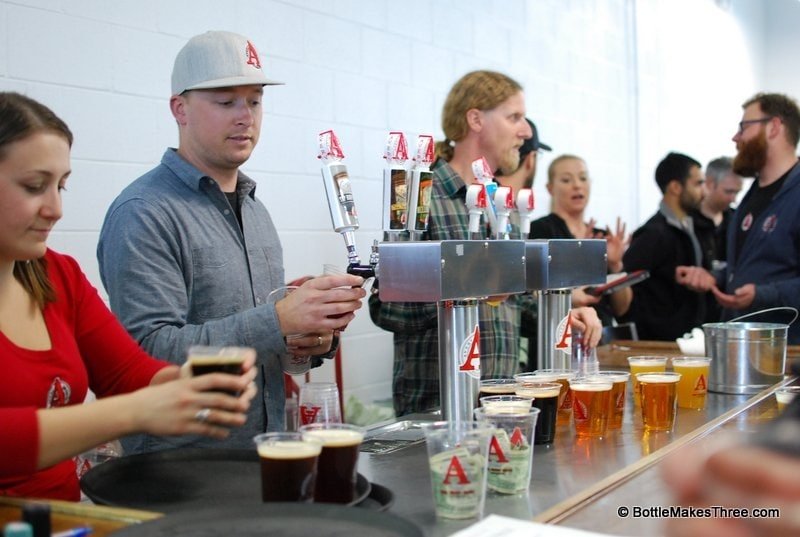 After a few beers and lots of photos, we decided to call it a night. On the way out we spotted Adam Avery hanging out between the gift shop and restaurant, welcoming patrons and offering a bit of an apology for the restaurant wait times. It wasn’t really necessary since nobody seemed surprised or bothered by the opening day crowds. We congratulated him on the brewery, thanked him for the hospitality, and told him that we looked forward to many return trips. 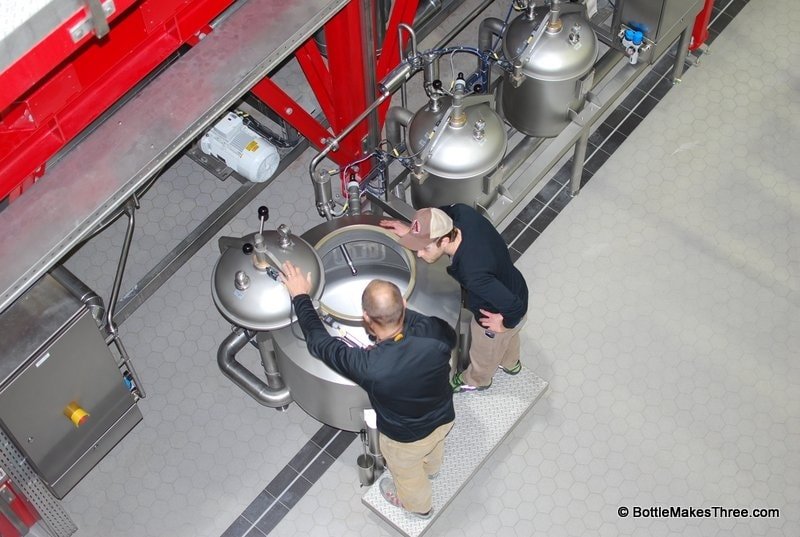 As we walked back to the car we decided to take a quick detour by the taproom. It was still crowded, but most of the line had dissipated. In typical Colorado fashion there were people enjoying beers on the patio, completely unphased by the snow. If we didn’t have a long drive home we would have joined them, taking a seat at one of those familiar red patio tables that Avery brought over from their former space. Instead we settled for a quick peek inside the taproom windows. It looks nice and cozy, with a huge lineup of 30 Avery beers on tap. We can’t wait to come back for a proper visit and some pints. 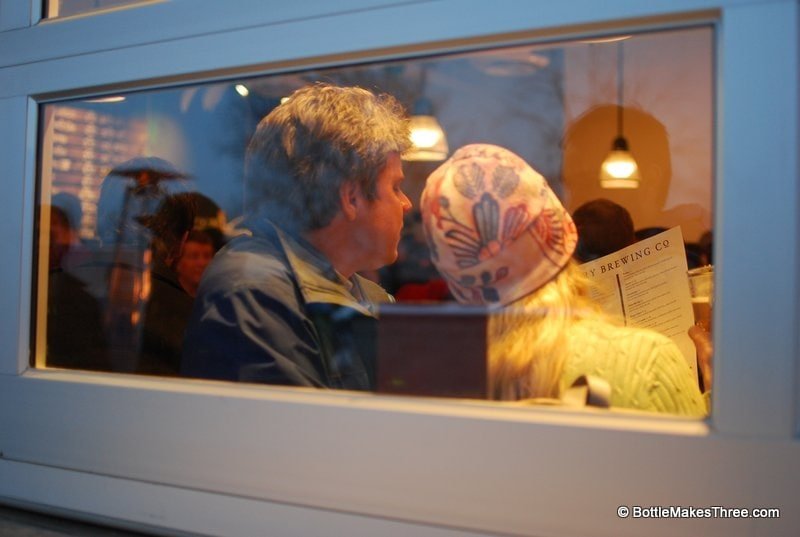 If you’ve already visited the new Avery space and gotten to enjoy the taproom or restaurant, let us know about it! We would love to get some tips for our return visit. Share your experiences in the comments, below.

Founded in 1993, Avery Brewing Co is a family-owned craft brewery, committed to producing eccentric ales and lagers that defy styles or categories.

You can take a guided tour of the new Avery Brewery on weekdays at 4 pm and weekends at 2 pm. Self-guided tours are available anytime during normal business hours.