Recently we’ve been refocusing our efforts on visiting ALL the great breweries in Colorado. At this point we’ve lost track of how many actual breweries exist in the state, but it’s somewhere around 250+ or so, and we’ve only visited around half of them. The horror! To help get us back on track we decided to make a Saturday afternoon trip to the only two breweries in Longmont we haven’t visited yet: 300 Suns Brewing and Großen Bart Brewery. Today we’ll be focusing on our visit to 300 Suns Brewing. Stay tuned for our review of Großen Bart Brewery later this week.

300 Suns Brewing opened in early 2014 in downtown Longmont. If you living in Colorado you probably understand the name. For out-of-towners who may not get the reference, it’s based on the claim that in Colorado we’re blessed with an average of 300 days of sun each year. Yes, that’s right. Mother Nature lets us see the sun quite often here in Colorado, even if she is wildly unpredictable at times. It’s the sunny days that make Colorado perfect for all types of outdoor activities: hiking, biking, mountain climbing, and of course, drinking beer. We love our sunshine and we love our beer, and at 300 Suns Brewing, we can enjoy them both. 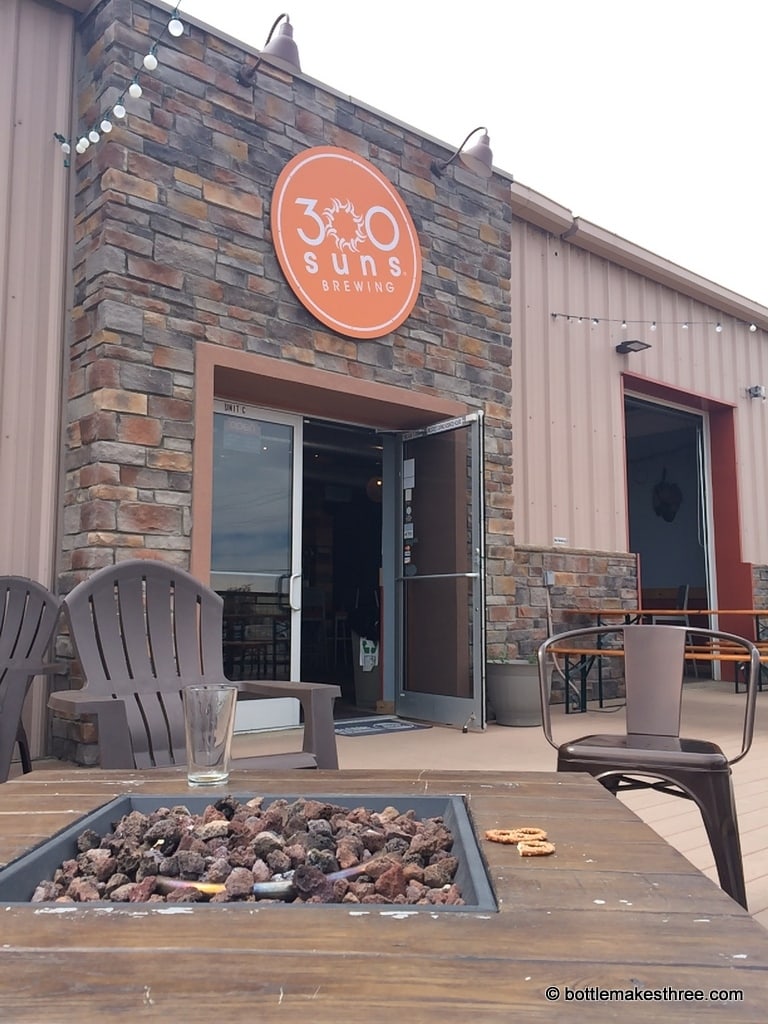 It was a lovely early May day when we paid a visit to 300 Suns Brewery, but rather than soak up the sun on the patio we opted for a few seats at the bar in the tasting room. The 300 Suns tasting room is beautiful, warm and welcoming. The walls are outfitted with colorful stained wood, and their bar is glistening in copper of a thousand-plus pennies. Yes, pennies! The decor was charming and cozy, a refreshing change from the typical industrial surroundings in many brewery tasting rooms. 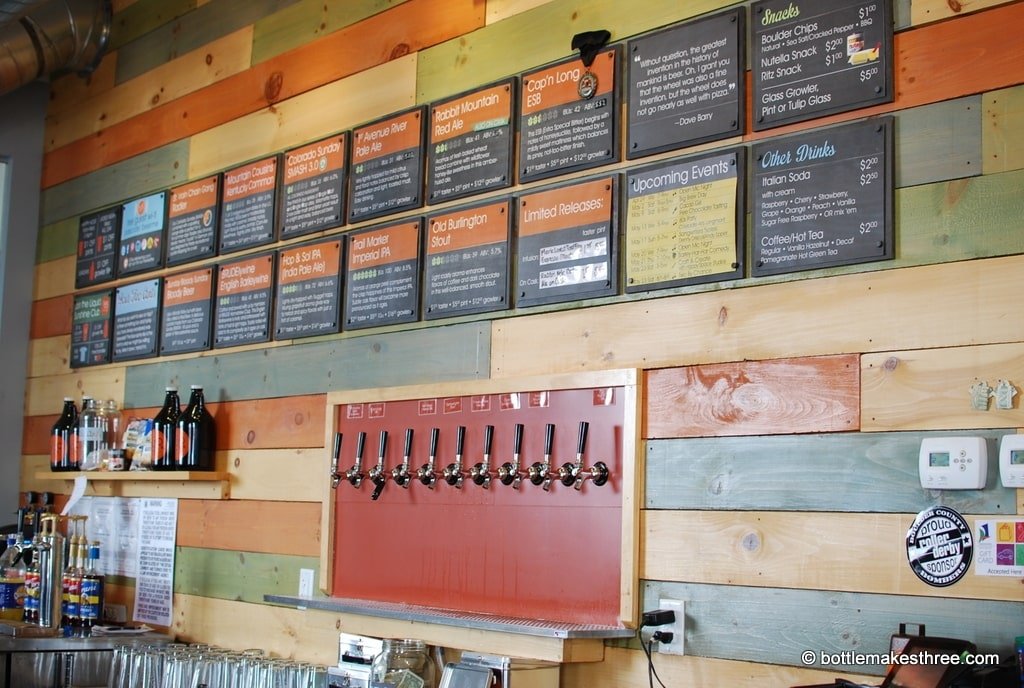 We settled in and ordered a few pints from the 10+ beers on tap. First up we had the Colorado Sunday SMASH 3.0. The Sunday SMASH is a single-malt, single hop ale, and this 3.0 version is made with Willamette hops, 2-row pale malt and British yeast. It was quite tasty, and at 4.5% ABV it was a safe place to start since we knew we could enjoy more than one.

After the SMASH we tried two IPAs: the Hop & Sol IPA and the Trail Marker Imperial IPA. They were both very good. Trail Marker was citrusy, with an orange aroma and a bitter orange/pine flavor, while the Hop & Sol was had more of a grapefruit flavor with a good deal of spiciness. It was tough to pick a favorite, but our resident IPA connoisseur, Jeff, enjoyed the Trail Marker the best, for what it’s worth.

The 300 Suns Brewing drink menu also includes a couple of beer cocktails. You can get a Sunday Bloody Sunday Bloody (Red) beer, or a St. Vrain Chain Gang Radler. The Radler is  a combination of the Colorado SMASH and sparkling orange-ade and appears to be very popular. We watched as one customer after another came in for a Radler, though it’s worth noting that most of them were actually cyclist from the St. Vrain Chain Gang Cycling Club – go figure! After seeing so many Radlers being made we decided we had to try it and shared a pint. Now we get why this is the perfect beer cocktail for after a long ride. It was light and refreshing, with an effervescent orange flavor that tasted similar to Tang. Yep, it was a beery, bubbly Tang. That description probably doesn’t do it justice, especially if you have bad memories of Tang as a kid (like we did) so you’ll just have to trust us that it’s pretty yummy. Better yet, go to 300 Suns and try it for yourself.

Clearly, 300 Suns Brewing is a popular stop for cyclists, but even if you can’t ride a bicycle there’s plenty happening at 300 Suns. They feature live music and comedy on select nights, as well as craft-making, painting classes, and lots more. Check out their website for their full event calendar to plan some fun times at 300 Suns.

On a side note, 300 Suns Brewing was founded by two husband & wife teams: Dan and Jean Ditslear, Mark Lusher and Candace Newcomb, each of whom bring different skills and talents to the company. Sadly, the 300 Suns family suffered a loss earlier this year when business partner & brewer Mark Lusher passed away from complications related to cancer treatment. We never met Mark, but based on the many touching tributes from all over our craft beer community, we know that he was a friendly, hardworking and all-around good guy, and that he is sorely missed. Fortunately, Mark’s legacy lives on in the incredible 300 Suns beers. Whenever we enjoy a 300 Suns brew, we promise to take a moment to make a toast to Mark. 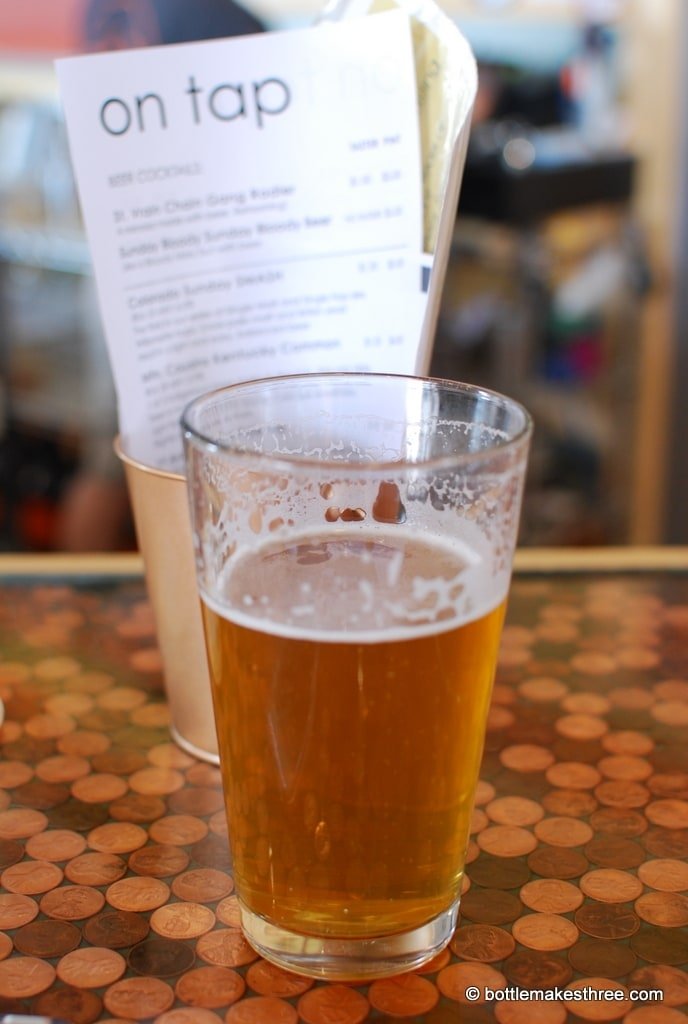 We enjoyed our afternoon at 300 Suns Brewing. They have everything we look for in a great craft brewery: the beers were top-notch, the tasting room was comfortable to hang out in, and everyone we encountered at 300 Suns was incredibly friendly. It’s really a shame we don’t live closer, or this would be a regular stop for us. If you haven’t checked out 300 Suns Brewing yet, we recommend making the trip. Go pay them a visit and let us know what you think.

More photos from our trip to 300 Suns Brewing:

Keeping Up with Colorado Beer Events