This past Monday we returned from the 2015 Beer Bloggers and Writers Conference in Asheville. We came home from North Carolina with suitcases full of beer and volumes of incredible stories, the latter of which we’ll be sharing with you over the upcoming days and weeks. However, we wanted to waste no time bringing you our Live Beer Blogging recap, since this is the event that we’re most often asked about when we’re discussing the conference.

Live Beer Blogging is best compared to speed dating with brewers. During the hour-long session, we meet with 11 breweries, each of which has about 5-minutes to tell us about their brewery and their beer, while we taste the brews and use social media or our blog to write about it. Live Beer Blogging is intense. It’s also crazy fun.

Jeff took photos and posted updates on social media as Live Beer Blogging went down. I typed the notes, fast and furious style, and asked questions. Other than fixing some obvious typos and adding hyperlinks, the notes and photos below were all done as Live Beer Blogging in Asheville happened. That being said, please remember our time restraints and beer consumption, and accept our apologies in advance for any remaining grammatical errors, salty language, lame attempts at humor, and for our overall descriptions getting a little fuzzy as things got hectic. It’s Live Beer Blogging, baby. Things are about to get sloppy…

Beer #1 is coming to us from Innovation Brewing of Sylvia, NC. It’s a Beet Basil Belgian Style Pale Ale. Wow! This beer is bright red, full of fresh beets and a boatload of basil. It’s delicious, but taking a nice photo of a red beer on a red tablecloth isn’t so easy so you’ll have to take our word for it. They have a second beer, the Black IPA. As the typist/note-taker I totally spaced the notes on this but it’s a nice IPA and one of their most popular beers. Fun Fact: all of the Innovation Brewing beers are gluten-reduced.

Beer #2: Next up is Highland Brewing Company’s King MacAlpin Double India Pale Ale. It’s the newest beer in their Warrior Series and was just released last night! Highland Brewing is a 21-year-old brewery, and is the oldest and largest brewery in Asheville. The beer is 10% ABV and 90 IBUs if you are interested. The taste is all citrus, and it’s pretty delicious. A great, strong double IPA.

Beer #3: Our next visitor is Fullsteam Brewery from Durham, NC. Founder & Chief Executive Optimist Sean Lilly Wilson himself poured us some Summer Basil Farmhouse Ale. This beer is ever-changing due to the evolution of basil during the season, so the taste can vary. This year they used hydroponic basil just to get it out earlier in the season, since it’s their best-selling seasonal beer. The beer was great, very bright and full of fresh basil flavor, a fantastic spring/summer beer. I want to drink this on a sunny patio. Fun Fact: Fullsteam is also pretty well-known for a Persimmon beer.

Beer #4: Things are getting backed up now because there are so many people in our room that nobody can move around. I feel it’s definitely cutting into our time with brewers, they are arriving slower and slower to our table, dang it! Finally, Front Street Brewery from in Wilmington is here. They are a small coastal town, around since 1995 (the brewery, not the town) and they don’t distribute at all. We tried their Absurdity Belgian IPA, which was a pretty malty IPA with a very well-hidden 9.1% ABV. It was very good, but it’s hard to be objective 4 beers in, so maybe you can visit them in Wilmington and try one for yourself? It’s just dawned on us that we still have seven beers to go, and we already can’t keep up.

Beer #5: Duck Rabbit Craft Brewery is here with their Milk Stout. Duck Rabbit has operated for 11 years, but still only open three days a week… Thursday-Saturday. Apparently, that’s a big improvement over their old tap-room schedule, per the locals at the table. Duck Rabbit Milk Stout is their best-selling beer and won a gold medal in the World Beer Cup and a few GABF medals. I guess that means it’s pretty good. One taste and we both agree it’s a delicious, smooth, creamy, easy-to-love Milk Stout.

Beer #6: This is the halfway point and the breweries are getting to our table slower and slower each time – sigh. Finally, Big Boss Brewing Company is here to pour their Hell’s Belle Belgian Style Ale. A big beer at 7%, which apparently was risky for this market when it was first released because of the high ABV. Now it’s their number one seller. Recently Big Boss Brewing won Brewery of the County – LIKE A BOSS. Get it? Big Boss? Big Boss Brewing is in Raleigh if you want to pay them a visit.

Beer #7: Susie from NoDa Brewing Company in Charlotte, North Carolina is here, telling us that NoDa is named for their location on North Davidson Street. Or was it Avenue? Couldn’t tell ya. We’re tasting Hop Drop and Roll IPA. It’s an East Coast IPA and is really, really good. I have no better descriptive words, and Jeff is the IPA expert but is too busy to help, so that’s all you get. Tick tock, tick tock, one minute left, this is all very stressful you know? Fun fact: NoDa doesn’t distribute outside of Charlotte, so it’s yet another reason to visit North Carolina. Also, these cans are pretty cool. And I love the name.

Beer #8: Lisa with the North Carolina Craft Brewers Guild is here to give us some White Street Brewing, and Lisa brought THREE beers. Is that even fair? We only have five minutes! We had the Kolsch, a 2014 World Beer Cup gold medal winner (it’s such a great beer), the Scottish Ale (sweet, spicy, malty) and the Hoptimist IPA. They were all good beers, and we’re fans of White Street Brewing, we went there in Raleigh, but with no more time we can’t really gush on about it. On to the next beer!

Beer #9: Next we have Olde Mecklenburg Brewery. That’s a tough name to spell after all the beers so I tried to type very carefully, I hope it’s right. OMB is from Charlotte and they make all German-style beers, with all German ingredients, following the German purity rules. OH MY GOSH, they also brought three beers. What?! Who is allowing this? I guess we could say no, but who can pass up these great beers? Okay, I didn’t get all the names but we had a Pilsner, an Amber, and a Hefeweizen. All great, I can’t even select a favorite. Cheers to some nice German beers!

Beer #10: Trophy Brewing Company of Raleigh is visiting us now, telling us that they are a brewpub that makes excellent pizza and beer. Did they bring us any pizza? Nope. They did bring us their Session IPA. It’s aggressively hopped and doesn’t taste like a session. Oh wait now we’re told there’s a second beer, a Milky Way salted caramel sweet stout. Yum! I could stop at this beer and be happy. Fun Fact: Trophy Brewing is on a 3-barrel system but they’re moving to 20-barrels very soon. Business is good, yay! Great job Trophy! You should get some type of prize for your accomplishments. Maybe a sort of tangible award you can hold and put on the shelf or something. You know?

Beer #11: Finally, our last brewery, and it’s Lonerider Beer from Raleigh. We already love Lonerider, we visited them on Thursday and they were pretty cool. I think they’re all outlaws or something. Lonerider brought us – WTH – three beers! Seriously, did nobody tell them we had 5-minutes? We had Lonerider’s Tres Vaqueros, a Belgian Trippel aged in oak barrels. It’s awesome. Next up, Red Spur Red IPA. Also good. Finally, the final beer is Sweet Josie Brown Ale. I love Sweet Josie, it’s fantastic. What a great way to finish up the session. WHEW!

When all was said and done, 19 beers were tasted in just 60 minutes and we survived! There were many beers we would have loved spending more time with, and fortunately, we ended up bringing home several unopened bottles so we can properly enjoy our favorites at home. As fast as we tried to take photos and type, it’s tough to provide much information in such quick bursts. We can tell you that all the beers we tasted were very good, there wasn’t a single one we wouldn’t enjoy drinking again, and that fact alone says a lot for the North Carolina beer scene. 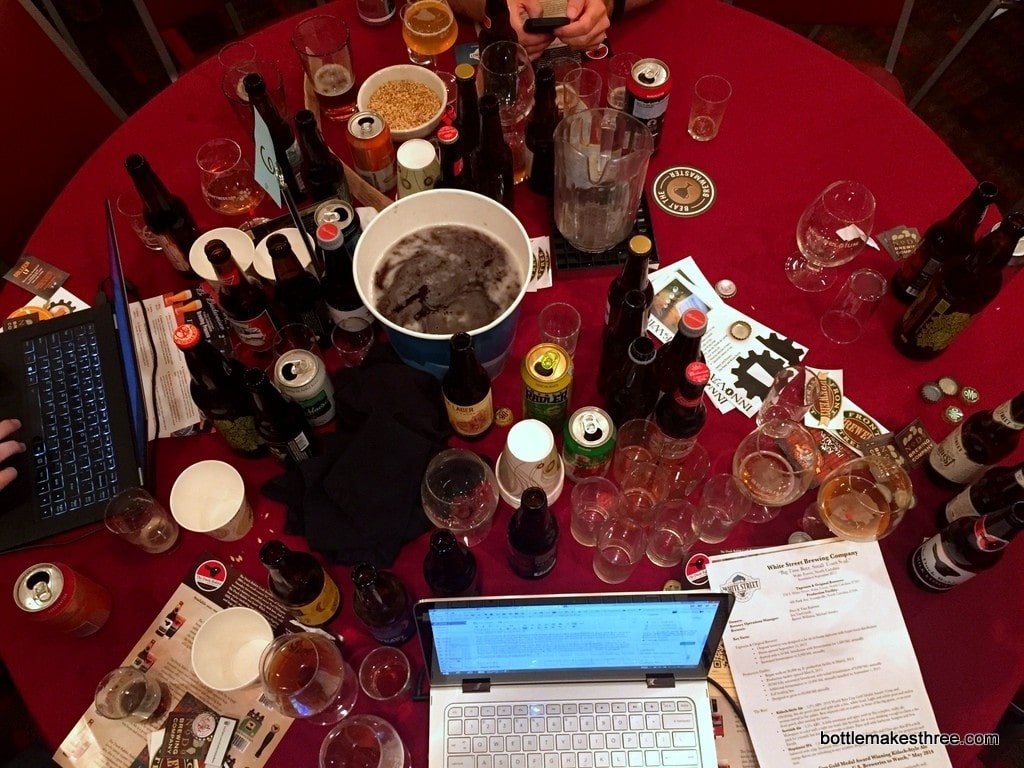 Big thanks go to all the breweries, brewery representatives, and people involved with the North Carolina Craft Brewers Guild and Beer Bloggers & Writers Conference for this truly crazy, amazing, unique experience.

Disclosure: Beer Bloggers & Writers Conference attendees who registered as a “citizen blogger” receive a discounted registration fee in consideration for writing a minimum of two posts about the conference. This is the first of our posts, and it’s very likely we’ll write more than two. That being said, any opinions and recommendations we make are ours alone and were in no way influenced by this discount.