It’s no surprise that most beer drinkers enjoy whiskey and vice versa. A shot of whiskey with a beer chaser is such a common combo, it even has its own name: the Boilermaker. Like peanut butter and jelly, or macaroni and cheese… beer and whiskey are often better together than they are apart. It’s more than collaboration, it’s synergy at its finest… and most delicious.

This is exactly why we continue to be excited by Jameson Irish Whiskey’s Caskmates program.

What is Jameson Caskmates?

You could trace Caskmates back to the Jameson Irish Whiskey Drinking Buddies program in mid-2015. That’s when Jameson invited five American breweries to tour their distillery in Ireland and then sent each brewery home with 6  empty Jameson Irish Whiskey barrels. The barrels would be used to age a unique, limited edition craft beer. One of those beers, a creamy, full-bodied black lager called The Smoothness, was made by Great Divide Brewing Company and aged for 5 months in Jameson Irish Whiskey barrels. We attended the release party in August 2015 and knew that Jameson was really on to something with their craft beer collaborations. Little did we know that this was just the beginning.

A few months later Jameson took their craft beer collaboration to the next level with Caskmates. They aged Jameson Irish Whiskey in barrels previously used to age Irish Stout,  creating the first round of Jameson Caskmates. Of course, we had to try Jameson Caskmates for ourselves, and we were not disappointed. The stout-seasoned barrels infused Jameson Caskmates with rich and distinctive notes of coffee, cocoa, butterscotch and just a kiss of hops. Jameson Caskmates became our new favorite whiskey, delicious for sipping or enjoyed in cocktails.

Just when we thought the collaboration was over, the distillers at Jameson Irish Whiskey found a way to bring it all full circle. 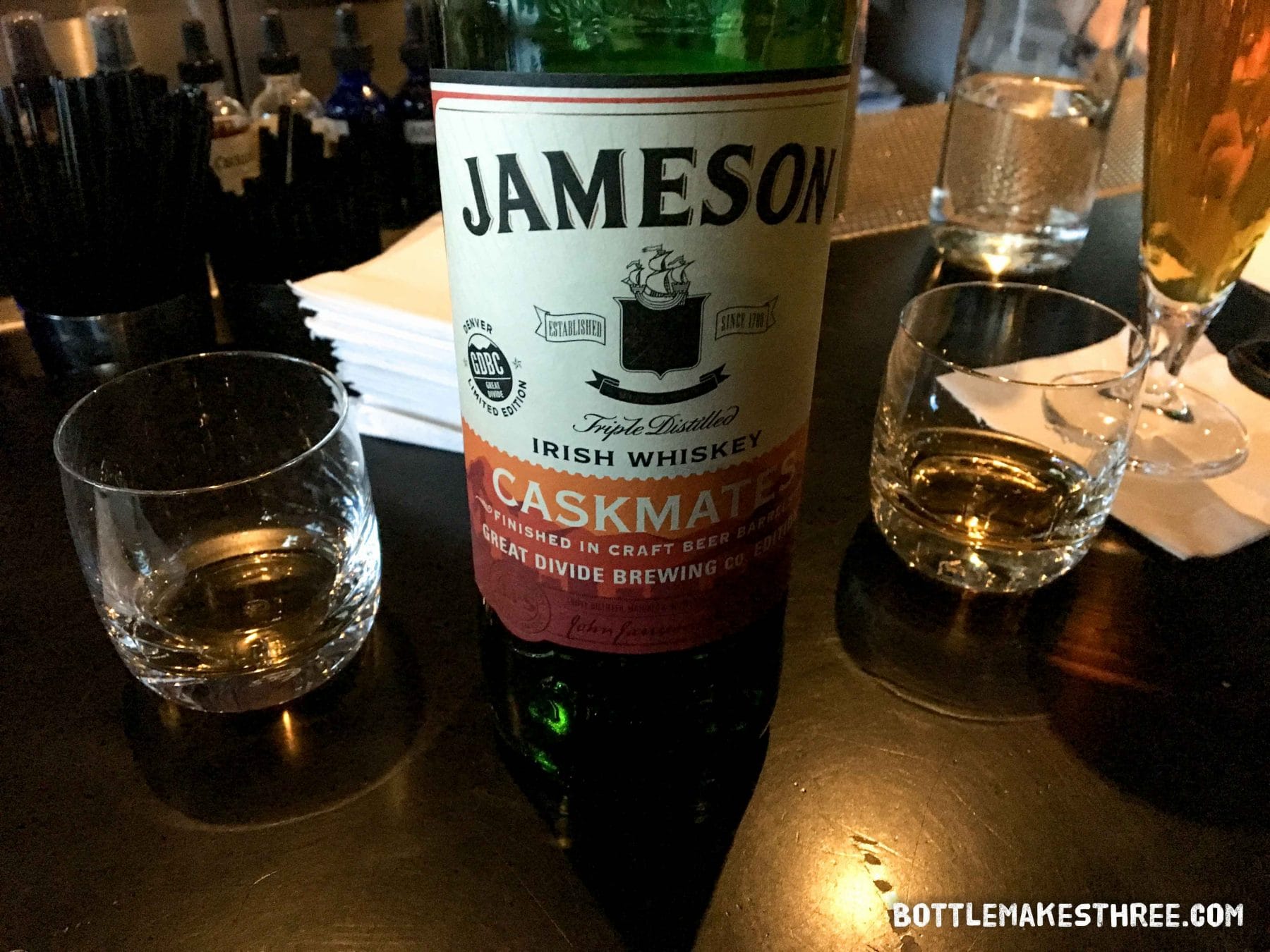 Remember the Jameson-seasoned barrels that Great Divide used for The Smoothness? Well, those barrels were returned to the Jameson Midleton Distillery and – you guessed it – refilled with Jameson Irish Whiskey. The Great Divide Brewing edition of Caskmates offers distinct notes of chocolate and vanilla and is as smooth as you’d expect from barrels that used to contain The Smoothness. The flavor is simply heavenly whether you drink it straight, on the rocks, or served with a dark lager (from Great Divide, of course!)

We were invited to Great Divide Brewing Co’s Barrel Bar to celebrate the release of this neighborhood edition of Jameson Caskmates. We enjoyed samples of the new Great Divide Brewing infused Caskmates, both straight, and in a cocktail using Yeti stout syrup which was incredibly delicious! Brian at Great Divide also showed us around the brewery and barrel aging room and even poured us a few other barrel-aged Great Divide beers. It was an incredible experience, filled with great craft beers and fine, Irish whiskey.

Want to know our biggest takeaway of the night? No, it wasn’t a bottle of Jameson Caskmates (though we did get that, too.) After talking to employees who work for both Jameson Irish Whiskey and Great Divide, our biggest takeaway was the total kinship between these two great companies. It’s obvious that they both share similar passions and cultures. It’s abundantly clear that they love working together, crafting something that uniquely brings a taste of Ireland to Denver, or maybe it’s vice versa. Perhaps this is why their collaborations have been so incredible. Who knows. Whatever it is, we sincerely hope that they continue to ship barrels back and forth between Midleton and Denver. Their collaboration is a delicious example of synergy, and we simply can’t get enough. 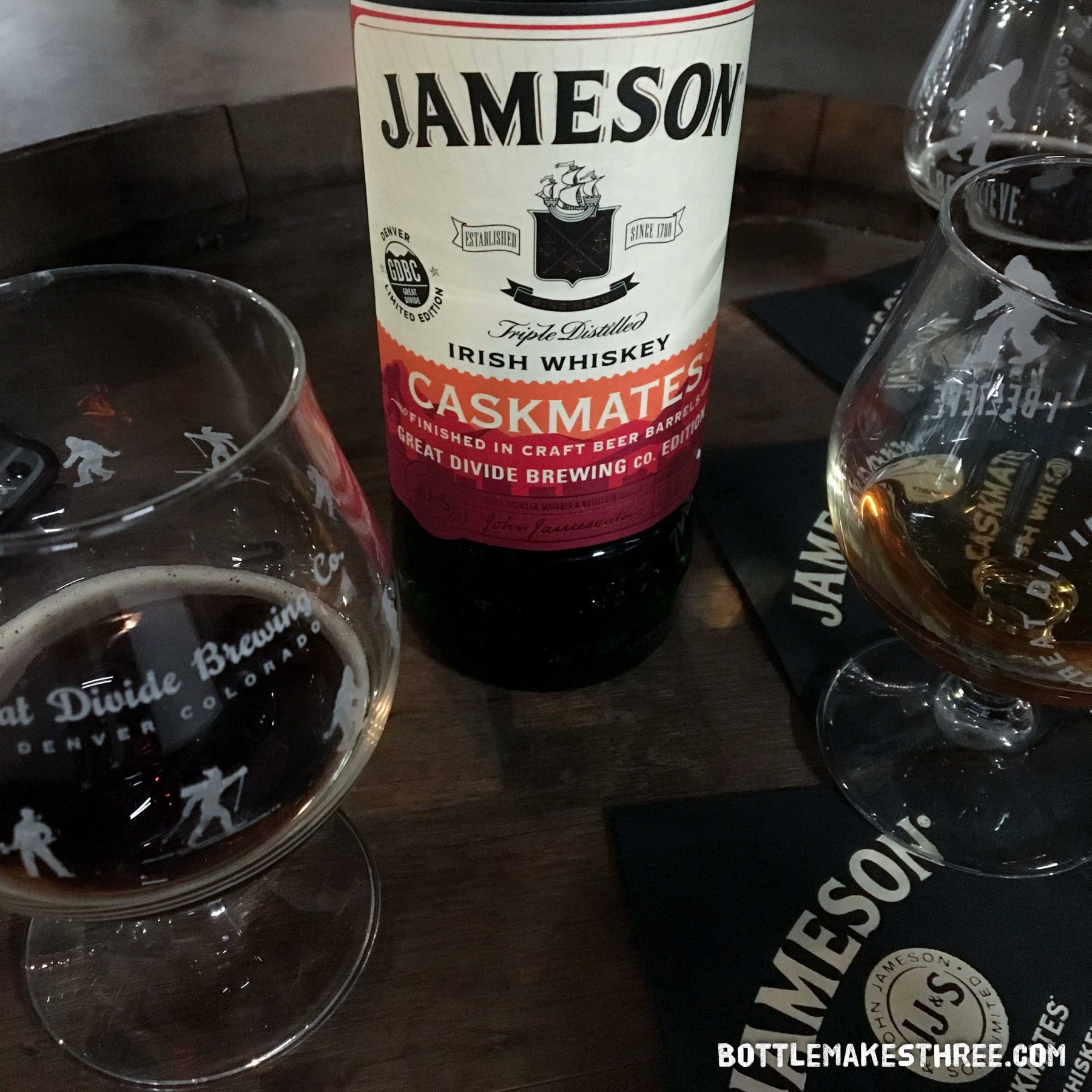 This is a limited edition whiskey, available only at select bars and liquor stores in Colorado. Just 300 cases of James Caskmates Great Divide Co Edition were distributed, so if you see a bottle you should get it while you can. We know that as of this posting Total Beverage in Westminster still has bottles in stock. Go get ’em. MSRP is $29.99.

If you can’t find Caskmates, maybe just stop by the Great Divide Brewing Co. Barrel Bar in RiNo. They’ll hook you up with something barrel-aged, tasty, and totally delightful.

Random side note: Do you think it’s possible to be reincarnated as a Jameson Irish Whiskey barrel? Spending days filled with whiskey or beer, surrounded by friends, plus getting to travel the world… it doesn’t sound so bad to us.