Written by Chris in Events, Homebrewing 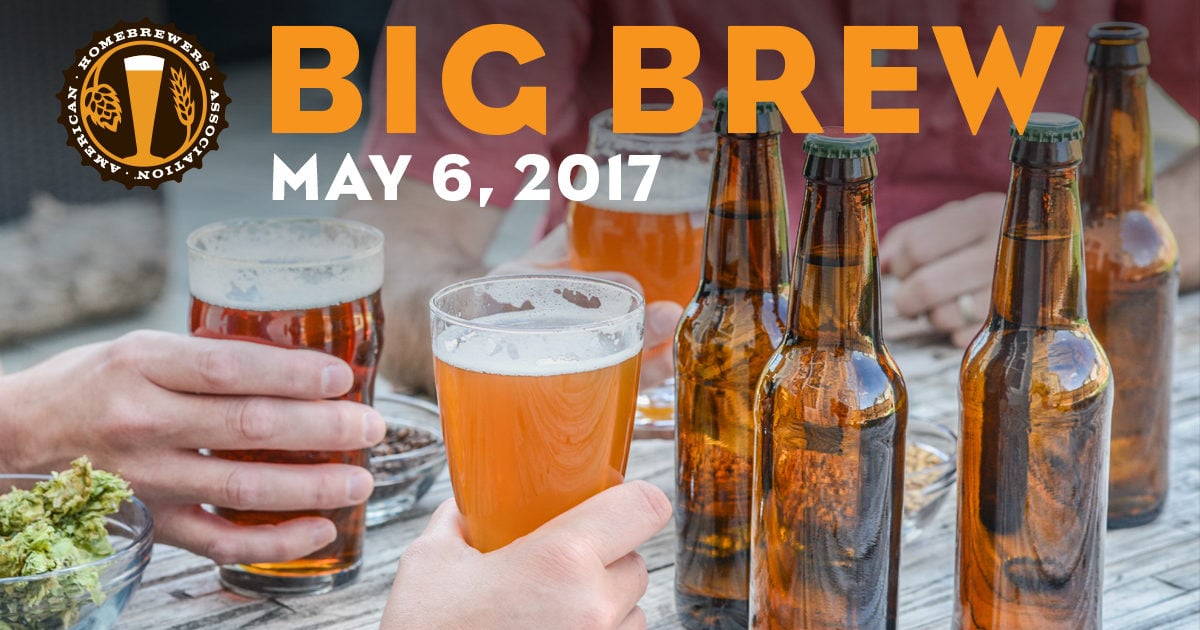 We know that there’s already a lot to celebrate this weekend, However, we found one more reason for you to raise a pint of great beer this weekend. This Saturday, May 6, is AHA Big Brew.

What is Big Brew?

In honor of National Homebrew Day, the American Homebrewers Association (AHA) celebrates AHA Big Brew annually on the first Saturday in May. Big Brew is a toast to the nation’s homebrewers and their shared love and appreciation for homebrewed beer, mead and cider.

“AHA Big Brew is an exciting day for homebrewers, bringing together brewers and beer lovers from all walks of life, all over the country and even all over the world,” said Gary Glass, director, American Homebrewers Association. “We’d encourage anyone with an interest or passion for beer to mark May 6 on their calendar and check out their local Big Brew site the day of. Big Brew is a deeply gratifying, community-driven event—and each year it’s a thrill to experience it, sharing the joy of homebrewing.”

According to the AHA, there are now over 1.2 million homebrewers in the United States. With one in every 200 adults in the U.S. now crafting their own beer, homebrewing has become one of the country’s fastest growing hobbies. As homebrewing grows, so do the number of AHA Big Brew events. In 2016, over 12,000 people celebrated AHA Big Brew at one of the 483 registered event sites. Together they created a total of 17,804 gallons of homebrew. Now THAT is a big brew!

For this year’s Big Brew on May 6, homebrewers and beer enthusiast worldwide will be participating in Big Brew events. There are already 15 registered events in Colorado. Find one near you using the AHA Big Brew Event locator. You can also host your own Big Brew event. Simply invite your friends and family over and brew a batch of homebrew together. It’s that easy!

Join the simultaneous toast at 11:00 a.m. MT on May 6, 2017. All beer drinkers are encouraged to raise a glass of beer, preferably a homebrew, at the same time on May 6. Wherever you are a homebrewer or just appreciate craft brewed beer, join this simultaneous toast to the hobby enjoyed by of thousands all over the world.

Big Brew Recipes from How to Brew

When we began homebrewing, the book How to Brew by John Palmer was our homebrewing bible. Palmer’s book provides everything a hopeful homebrewer needs to know to brew great beer. Whether it’s your first batch of extract or a complex all-grain recipe, this book has useful tips to make sure your beer is great. For Big Brew this year, the AHA is celebrating the upcoming publication of the 4th edition of How to Brew by providing three sample recipes from the book. If you are looking for a recipe for Big Brew, consider one of these tried-and-true recipes:

Intrigued by homebrewing, but not sure where to start?

That’s exactly how we felt when we first became interested in homebrewing. It took several beers at Dry Dock Brewing Company to help us find the courage to talk to the staff at The Brew Hut, right next door. When we finally went over we found the staff was friendly, encouraging and incredibly knowledgeable. We walked in hoping to have some questions answered about homebrewing. Instead, we left with a 5-gallon homebrew starter kit, and the confidence that even we could make a great batch of beer. We haven’t looked back since.

The moral of our story: homebrew is a hobby for anyone… assuming you’re old enough to drink the finished beer. We started with minimal equipment and even less skill. We learned along the way as we brewed, and our beers aren’t half bad. Do we aspire to open a brewery? Hell no! But it’s so fun and gratifying to create your own beer, and to experiment with new styles and flavors. If you think you’ may be interested in homebrewing, check out an AHA Big Brew event. All the fellow homebrewers we’ve met have been incredibly nice, super welcoming to newbies, and willing to share their tips to making the best homebrew.

The American Homebrewers Association website offers a wealth of resources for homebrewers of all abilities. If you’re curious about what your first homebrew day would look like, check out their How To Brew Beer: Beginners page. This step-by-step guide provides you photos of each step of the brewing process. From the boil through to the first sip of your bottled homebrew, they walk you through each step. When you’re ready to move to more advanced styles of brewing, the AHA provides those instructions, too. The AHA website will even help you find a local homebrew club or a neighborhood homebrew supply shop. We’ve been AHA members for years, and can’t speak highly enough of the information and resources available on their page.

For more information about Big Brew, the American Homebrewers Association, or homebrewing in general, visit homebrewersassociation.org.

Share with us the details in the comments below. On Big Brew day, you can join the conversation online using #BigBrew17. We’d love to see photos of you joining in the simultaneous toast!

May Beer Fests and Events