If you’ve ever driven west on Interstate 70 from Denver to Evergreen, you’ve certainly seen the sign for El Rancho. We’ve certainly driven past it dozens of times. But if you’ve seen that sign and thought that El Rancho was just another small mountain town, boy do we have news for you. Located just off I-70 at Exit 251, El Rancho isn’t a town at all. El Rancho is a destination; a part of Colorado history. And most recently, El Rancho has been reborn as a Colorado craft brewpub, El Rancho Brewing Company. But before we talk about the El Rancho of today, let’s take a quick trip back to the beginning…

The History of Evergreen’s El Rancho

El Rancho was built in 1948 by the Jahnke family and opened as a restaurant and trading post. In 1953 it was purchased by the Zipprich family and was operated by their daughter and son-in-law, Donna and Paul McEnroe. The McEnroe’s ran the family business for more than 30 years, and during that time El Rancho business flourished and grew. A banquet space was later added, as well as a gift shop and post office. El Rancho became a favorite destination for locals and mountain tourists alike. People from all over would come to enjoy the food, pick up souvenirs from the gift shop, and to take in the spectacular views of the Continental Divide. El Rancho was home to many memorable moments, from engagements to weddings to countless celebrations.

Sadly, nothing lasts forever. The McEnroes sold El Rancho in 1988. During the next several years the business changed hands several more times. Other owners tried, but the El Rancho never really flourished like it did in the earlier days. In 2012 El Rancho finally closed their doors, seemingly for good. Even the Westword noted that the iconic El Rancho was riding off into the sunset once and for all.

Fortunately, the story of El Rancho was not quite finished. The Vincent family, three brothers and their spouses, came together to buy the historic old building. They remodeled and updated El Rancho, making repairs and restoring the space. They managed to modernize the business while keeping the rustic Colorado log-cabin feel of the place. In late 2015 they reopened El Rancho as a brewpub, complete with a 10 barrel brewery – El Rancho Brewing Company. 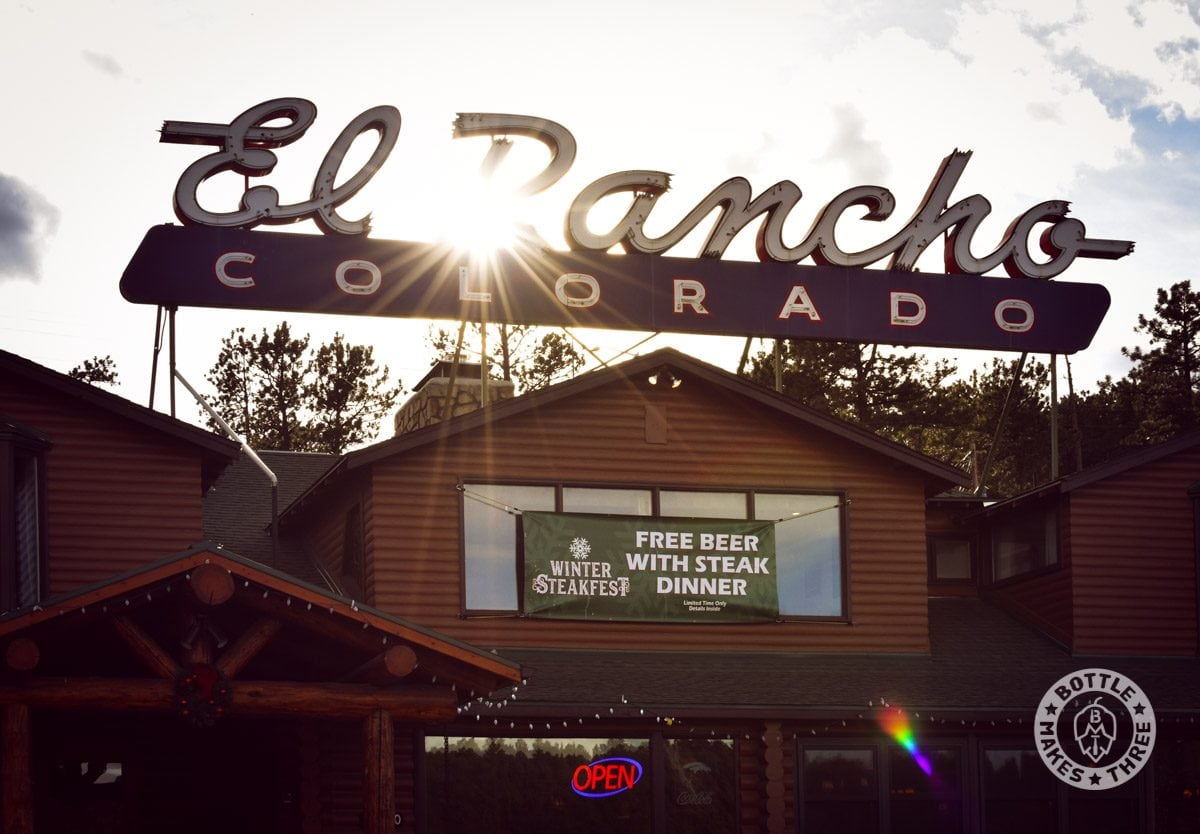 The new space is different, we’re told. We honestly had never been to the former El Rancho. However, at the new El Rancho Brewing Company, you can still get a steak dinner and take in the beautiful mountain views from the dining room. The brewpub menu offers several hearty sounding dinners, such as Pan Fried Trout and Chicken Fried Steak. It also features sandwiches, barbecue, and plenty of delicious sounding starters and snacks. Best of all, if you come to El Rancho to dine, you can pair that meal with a craft beer made on site. Clearly, that’s a big upgrade.

Even though we had no previous history with El Rancho, we immediately loved the new El Rancho brewpub. The interior is rustic yet comfortable, spacious yet cozy. We loved the log walls, the big windows, and the cozy fireplace. Also, those mountain views that everyone raves about are no joke. Even from inside the restaurant the mountains are beautiful, and we weren’t even trying to capture the mountain view… 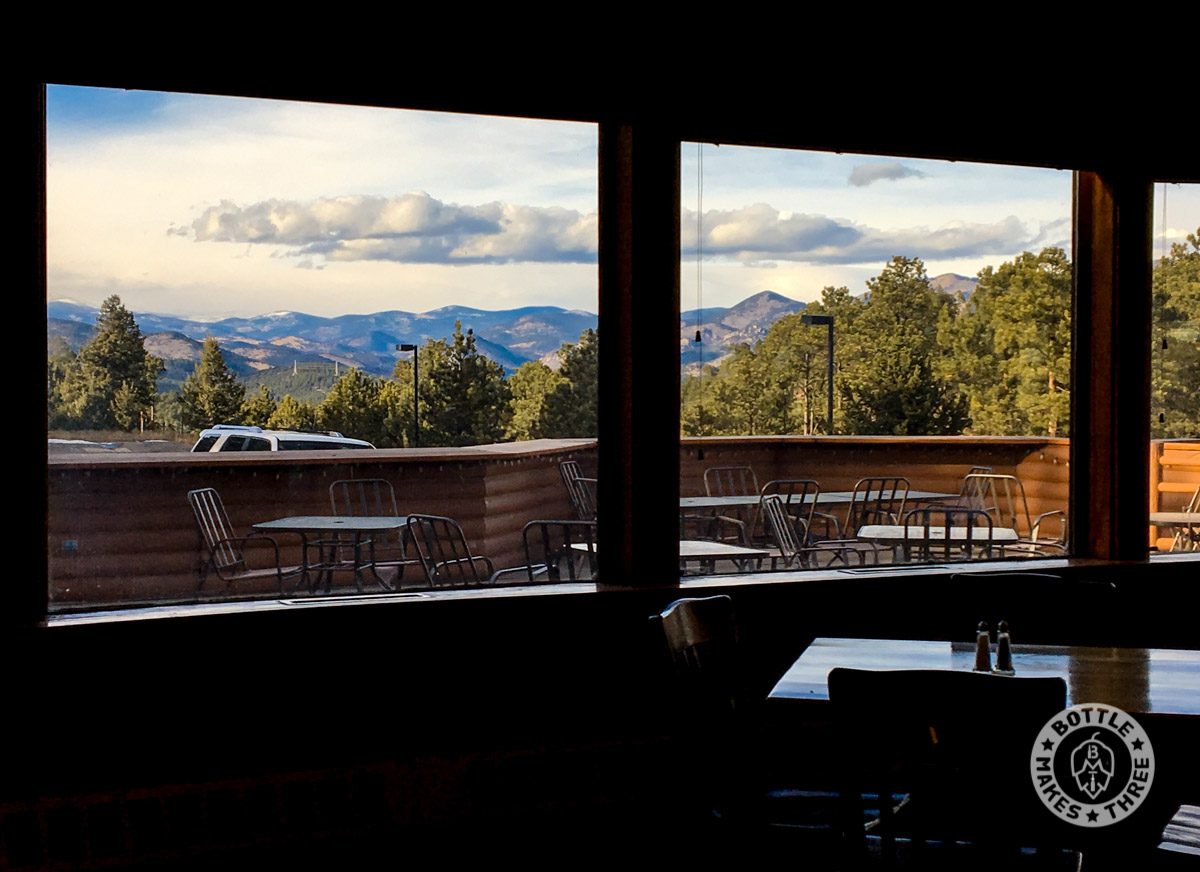 Clearly, we were impressed by the inside of El Rancho. Once inside we were just as impressed with the El Rancho Brewing Company beer selection. They had roughly a dozen beers on tap, including a nice selection of traditional styles and several more creative and seasonal brews. We wanted to try several El Rancho Brewing Company beers, so we decided on ordering a taster flight. We sampled four El Rancho beers: the I(70)PA, the Overlook Imperial Coffee Stout, the HolidALE Winter Seasonal, and the GABF gold-medal-winning Vahalla Finnish Sahti. 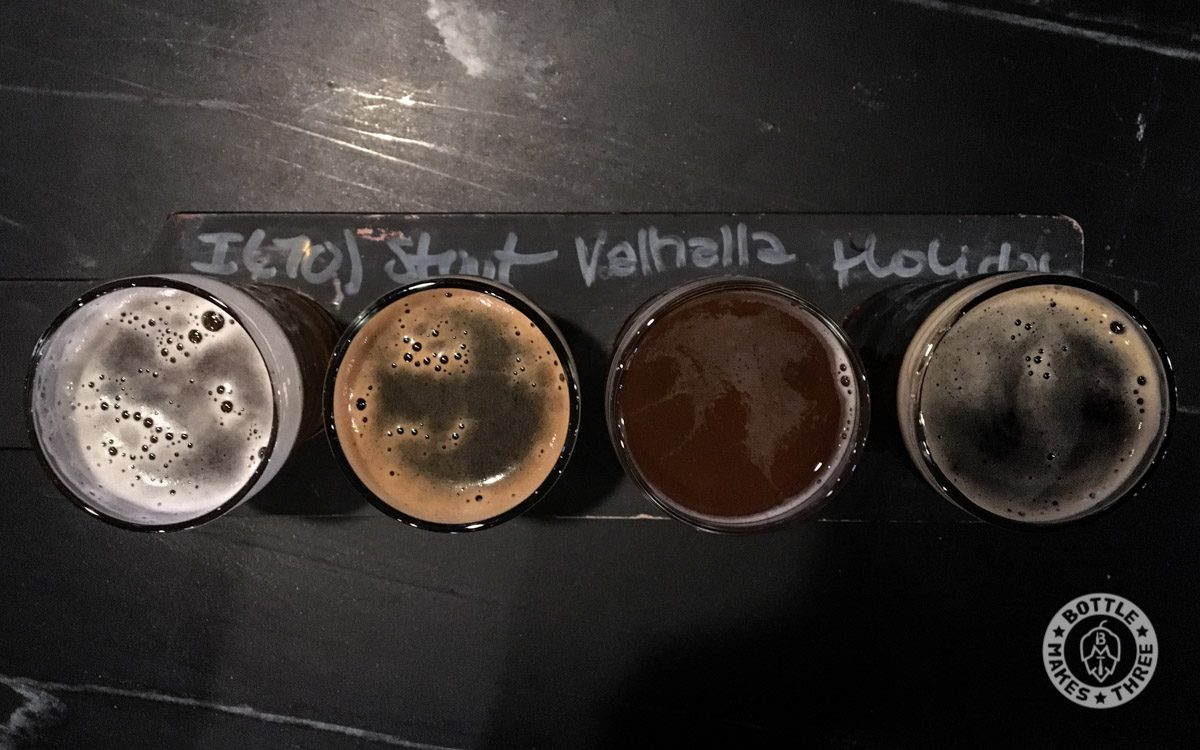 All four beers were excellent. There honestly wasn’t a single one that we wouldn’t order as a full pint. The I(70)PA was a big and bitter brew, heavy with citrus aroma and flavor. Overlook was bold and delicious, with a creamy and delicious coffee kick. The HolidALE was rich and full of caramel flavor, perfect for sipping by the El Rancho fireplace. Finally, the Valhalla was perhaps the most interesting brew, given that we’d never had a Finnish Sahti before. It was surprisingly sweet and just a touch spicy, with a mild rye finish. Our running joke while sipping the Valhalla was, “What a Finnish!” Get it? Finnish… Okay, maybe it was only funny to us, but we found it hilarious. 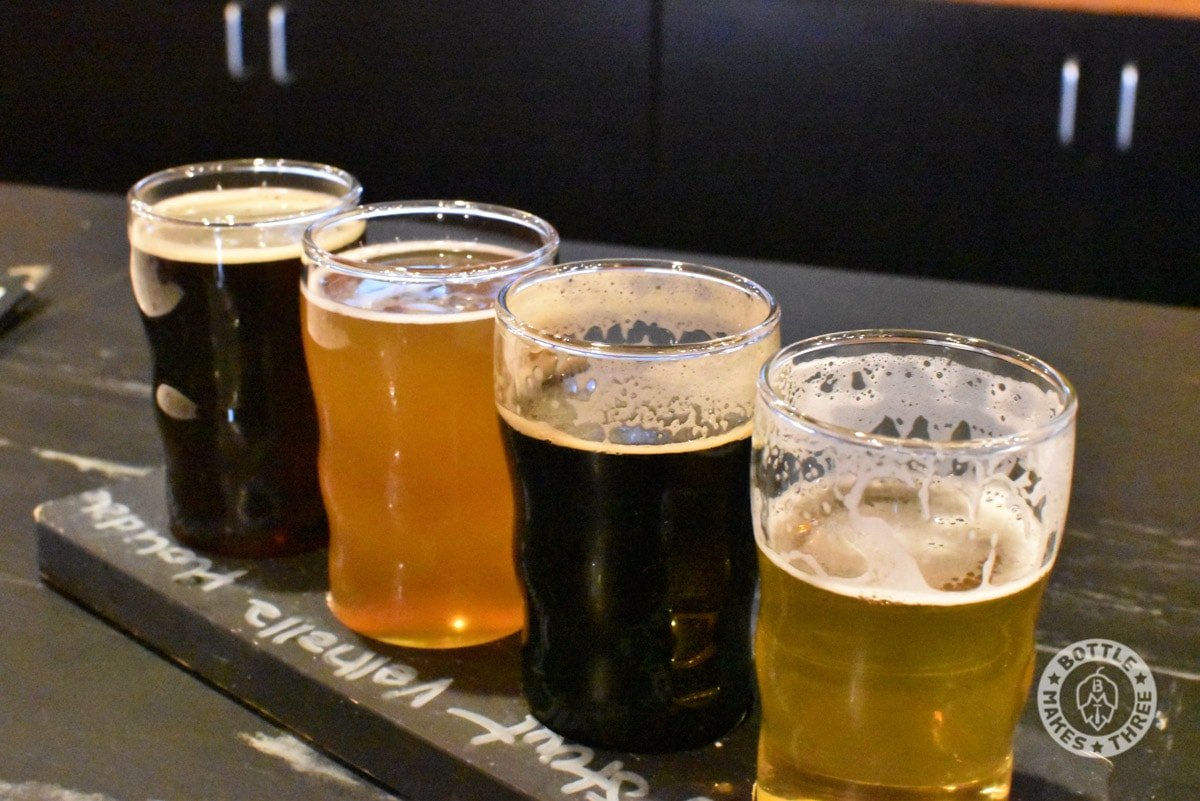 After our samples, we decided to share a dessert – a full pour fo the El Rancho Pecan Pie infused blonde ale. That counts as dessert, right? The beer was delicious, filled with nutty pecan and rich vanilla. Say what you will about pastry beers, we think a sweet and tasty brew like this Pecan Pie Blonde is a nice treat every now and again. This one was pretty darn delicious.

We thoroughly enjoyed our trip to El Rancho. That being said, we’ve seen some mixed reviews about El Rancho on some of the crowd-sourced review sites, particularly in response to service or food issues. That’s truly unfortunate. We honestly had a great experience at El Rancho, we wouldn’t waste our time (or yours) writing about a place we didn’t like. During our visit the beers were good, the service was attentive, and while we didn’t dine, the food served to those around us looked really appetizing.

And lest you think we get special treatment because we’re bloggers – that’s hilarious! No, we definitely do not. We never mentioned to anyone at El Rancho that we had a blog, so we definitely didn’t get any special attention while we were there. Hopefully, our good experience means that any previous issues are being worked out. Based on our visit we would certainly recommend giving El Rancho Brewing Company a chance the next time you’re in Evergreen.