Parry’s Pizza Opens at the Streets of SouthGlenn; Grand Opening Celebration This Saturday

Written by Chris in Food, News

Parry’s Pizzeria & Bar has opened their newest Colorado location at the Streets of SouthGlenn in Centennial. This latest Parry’s Pizza site offers the same great New York style pizza, calzones, and wings as their other Colorado locations. It also features a craft beer bar with 100 beers on tap, focusing on delicious craft beers from Colorado and beyond. 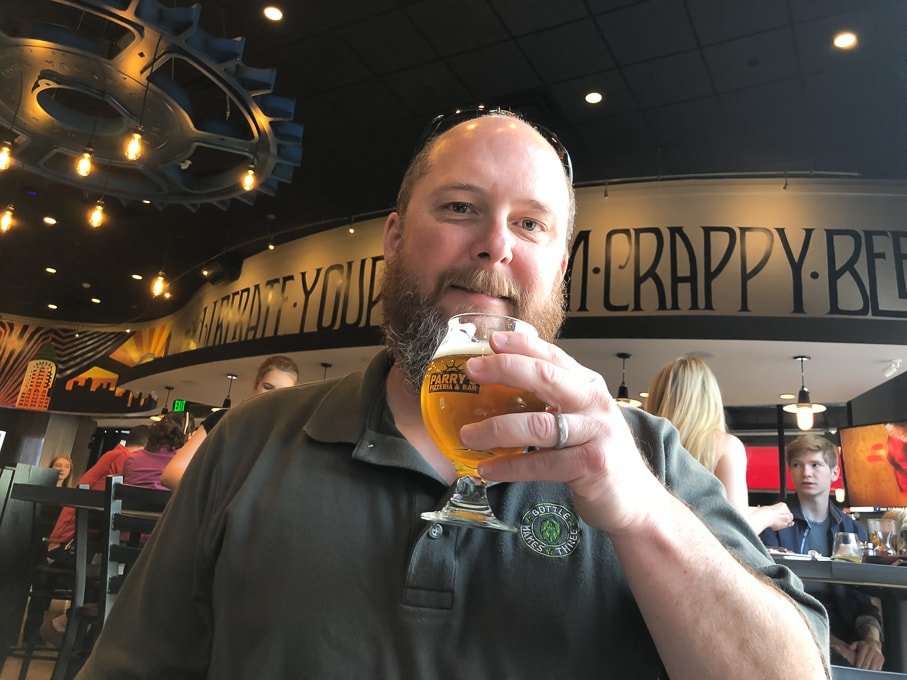 Checking Out the Newest Parry’s Pizza

We visited the Parry’s Pizza at the Streets of SouthGlenn on Friday night for a soft-opening event. For our dinner, we stuck with a few of our tried-and-true Parry’s Pizza favorites, the tasty Bleecker Street Bruschetta and the Zesty Lady Liberty pepperoni pizza. These are our go-to orders when we dine at our local Parry’s Pizza in Castle Rock, so we knew that it should be good. The staff at SouthGlenn didn’t disappoint with our meal, and everything arrived hot, fast, and as delicious as expected.

In an effort to try something new we also ordered dessert. Hey, any excuse to get dessert is good enough for us! We ordered the South Harlem Churro, something we’d never even heard of before this visit. This sweet treat featured 2 churro doughnuts, each coated with cinnamon and sugar, topped with whipped cream and drizzled with caramel. They were heavenly! Apparently, we should save room for dessert more often!

Of course, no meal at Parry’s Pizzeria is complete without a craft beer. The SouthGlenn location had some incredibly impressive beers on tap. Despite having 100 offerings, our server was knowledgeable about the brews and helpful when we had questions. We totally quizzed her on a few offerings, and she knew her stuff. 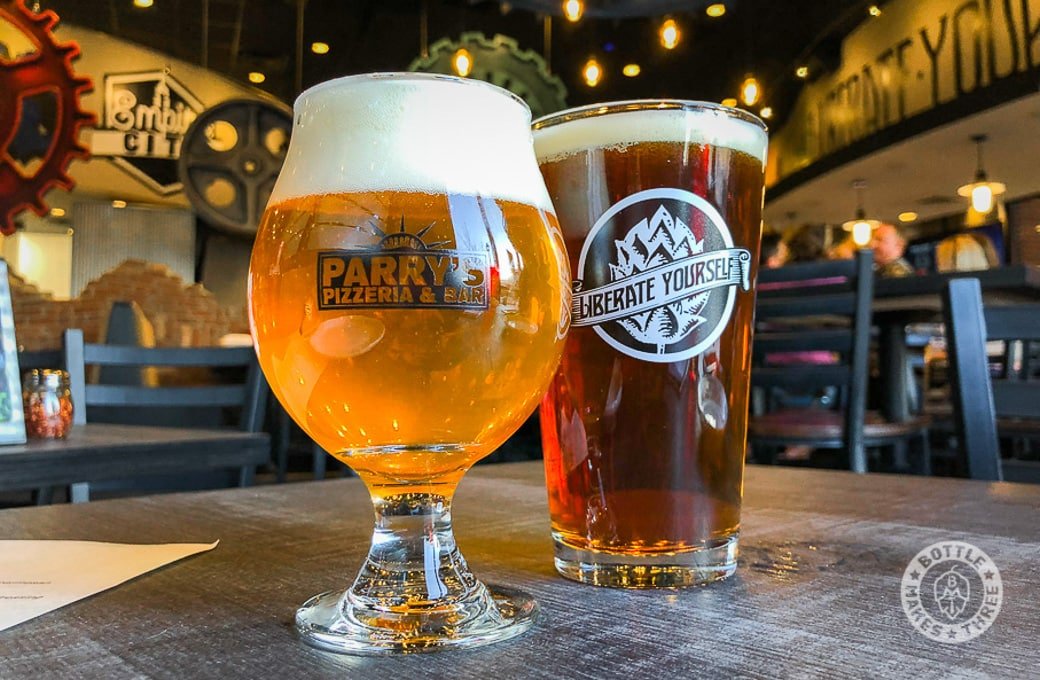 The only downfall with 100 taps is that the menu is so big, we only made it to page 2 (of at least 4) when we had to put in our order. There was literally too much to choose from, which is not a bad problem to have! In the end, Jeff had a glass of Pliny The Elder. This well-known and highly desired Imperial IPA from Russian River Brewing Company is outstanding. We’ve had it before, but it’s one of those brews you just can’t pass up when you see it on tap.

I decided to try something new and selected Dogfish Head’s Flesh & Blood IPA. I have to admit, knowing that Dogfish Head makes some really crazy, off-centered ales, I researched the beer first to make sure it wasn’t brewed with some sort of cannibalistic human flesh and blood. It turns out that while Dogfish Head was being literal with the name, only some citrus fruits were harmed in the making of this beer. Flesh & Blood IPA is made with lemon flesh, sweet orange peel, and blood orange juice. It was big, bold, and flavorful, finishing with a nice citrusy punch. 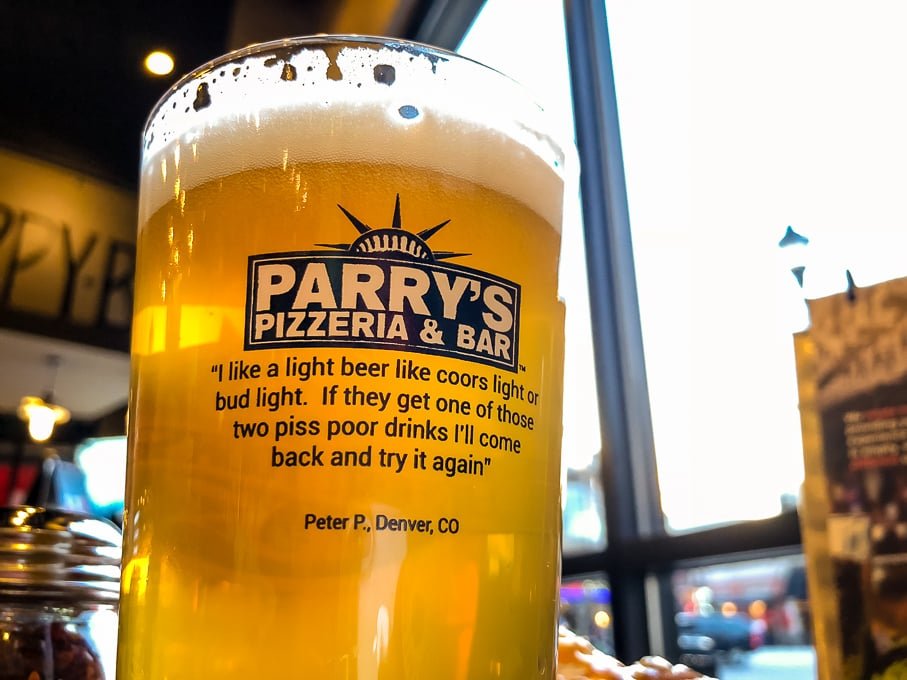 Parry’s Pizzeria & Bar at The Streets of SouthGlenn hosts their official Grand Opening celebration this Saturday, May 5. Bring the family to Parry’s Saturday Shebang and enjoy games, pie eating contest, dough juggling contest, face painting, and more. Brewery reps will be there providing samples and swag. You can also enjoy live music by Kenny Lee Young.

Best of all, Parry’s Pizza will have some special 9¢ beers to celebrate this 9th restaurant. That wasn’t a typo, they’ll have beers for 9-CENTS. The 9¢ offerings will rotate throughout the day and will include craft beer from Dogfish Head, New Belgium Brewing, Avery Brewing, Ska Brewing, and Epic Brewing. You can even try the Dogfish Head Flesh and Blood IPA infused with rum-soaked tropical fruit, which we imagine will be crazy-delicious! 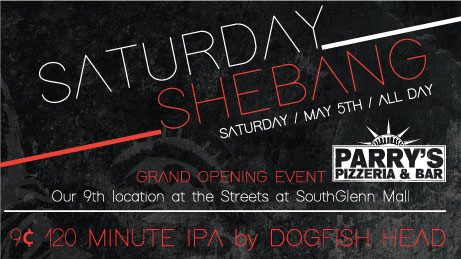 The Parry’s Pizza grand opening party will be swinging all day Saturday, May 5, from open to close. Full details and a schedule of events can be found on the Parry’s Pizza SouthGlenn Facebook Page.

About Parry’s Pizza at the Streets of SouthGlenn 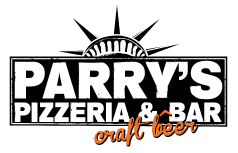 With this new restaurant, Parry’s Pizzeria & Bar has 8 locations throughout Colorado, plus one in North Carolina. Parry’s Pizza offers a variety of New York style offerings and plenty of great craft beer. For more information and to learn about the other Parry’s Pizza locations, visit parryspizza.com.

Spring May Be Ugly, but Summer Will Be FUGLI