The RiNo neighborhood of Denver is already spoiled with more than their share of great breweries, bars, and watering holes, so when we heard that a new self-service beer bar was opening we were a bit skeptical. Was another RiNo beer bar necessary? Was this self-service thing just a gimmick? What’s the big deal about pouring your own beer?

We decided to pay First Draft a visit the day after they opened to the public. We were more than a little doubtful about the concept but figured it was worth a trip to check them out. As soon as we walked in the door several friendly First Draft staff members greeted us, verified our IDs, assigned us bracelets that would activate the taps, and gave us a crash course in pouring our own beers. Then, after picking our beer drinking vessels – a pint for Jeff, a tulip for me, they set us loose in the taproom.

Facing a wall of 40 tap handles we felt like kids in a candy store. The craft beer selection was impressive, with dozens of fantastic offerings from breweries inside Colorado and beyond. We loved that there was no rush to decide on what to drink and if we wanted to taste something we just swiped our bracelet and tried it. It was pretty awesome. Before we had finished our first beers we were totally drinking the First Draft kool-aid. First Draft was different, and most of all, First Draft was fun! We quickly came to agree that First Draft could be really popular for a variety of beer lovers. Below we’ll explore just who we believe will most enjoy this new Denver taproom. 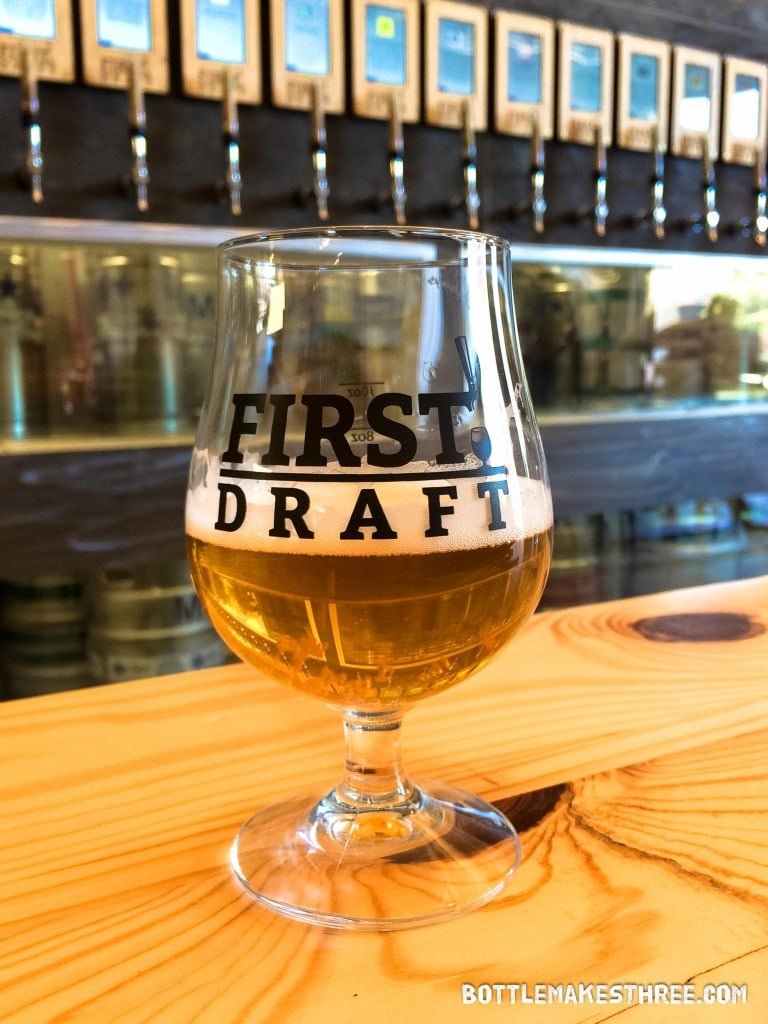 First Draft is the perfect spot for craft beer nerds

With nearly three dozen taps of great craft beer, you’re sure to find a something to excite you at First Draft. We were surprised to see several beers we’d never tried, and more than a few we didn’t recognize at all. This is where the First Draft concept shines. Maybe you want to try something new, or unknown, or just plain weird. You can do that at First Draft without committing to a full pint. Since you fill your own glass and pay by the ounce, you can taste to your heart’s content before you commit to a full pour. In fact, you never have to fill your glass if you don’t want to, you can just sample away like it’s your own personal beer festival. Oh, and if you’re an Untappd badge whore, just imagine all the check-ins you can get in one sitting. Score! 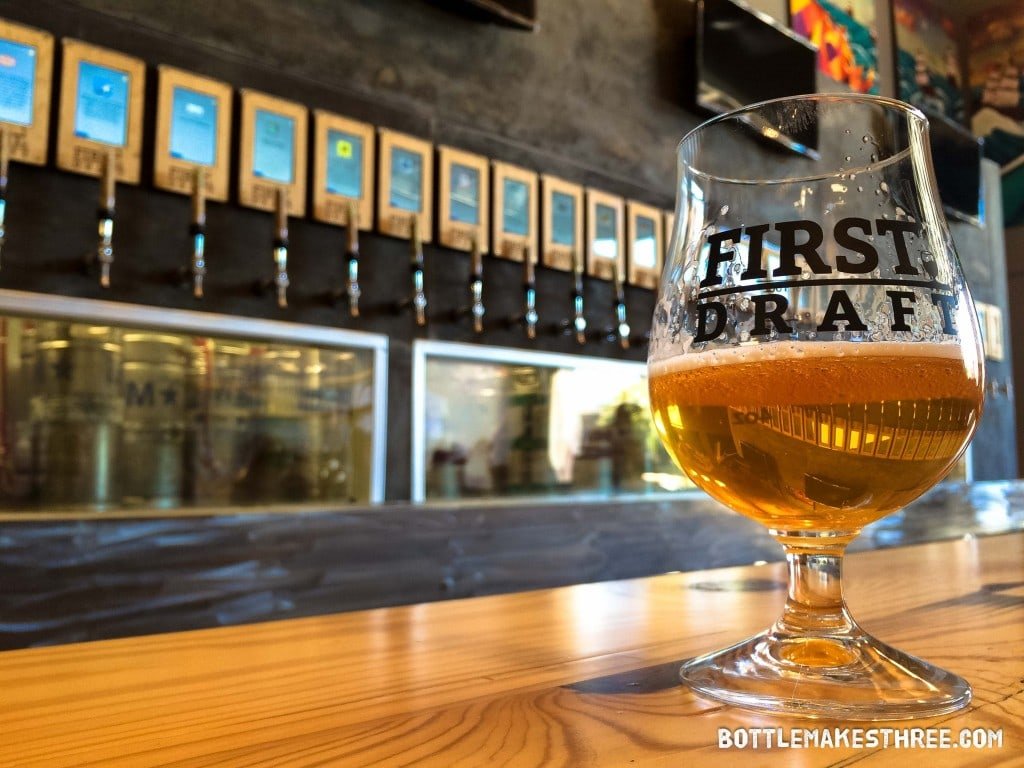 First Draft is the perfect spot for craft beer newbies

Maybe you are still a big fan of the yellow fizzy beers but you’re ready to expand your horizon. First Draft is a great place to start if you’re new to craft beer, and not just because of the smaller pours. Each beer features an electronic display that gives you loads of info about the brew, so as you sip you can learn what styles and flavors you like. The staff at First Draft can help recommend beers for you too, and are really knowledgeable about the offerings on tap. Finally, if after all that sampling you still don’t find a craft beer you love, that’s okay. First Draft has ciders and wine on tap if you decide to throw in the towel on beer. 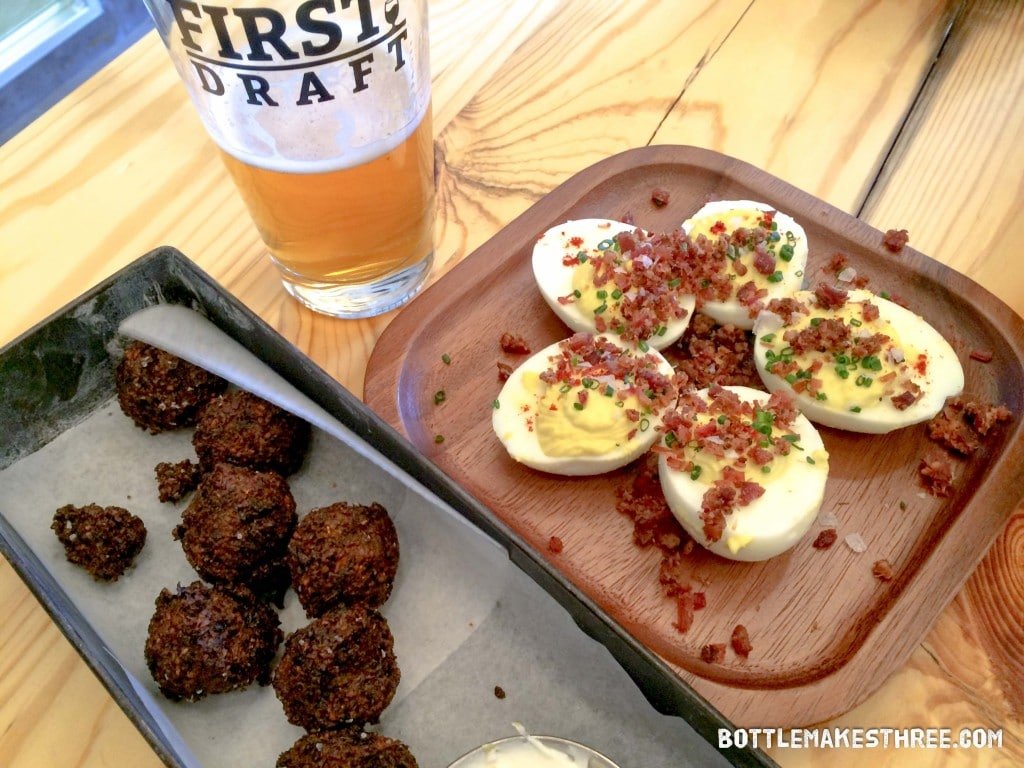 We hadn’t been at First Draft long when we were fans of the concept. We tasted several beers, a few ounces at a time, and were enjoying the variety and selection. But then we got hungry, and that’s when First Draft really impressed us. The First Draft kitchen offers a great assortment of small plates, shareable dishes and wonderful entrées, all made fresh, in-house. We had some incredible deviled eggs and a plate of chickpea and kale fritters served with a lemon Greek yogurt dip. Both dishes were absolutely outstanding! We were not expecting the food to be so good, and these smaller plates are great for sharing. Personally, we can’t wait to go back and pair a delicious craft beer with a churro or get a scoop of ice cream to create our own beer float. Because there is absolutely nothing wrong with a beer float. 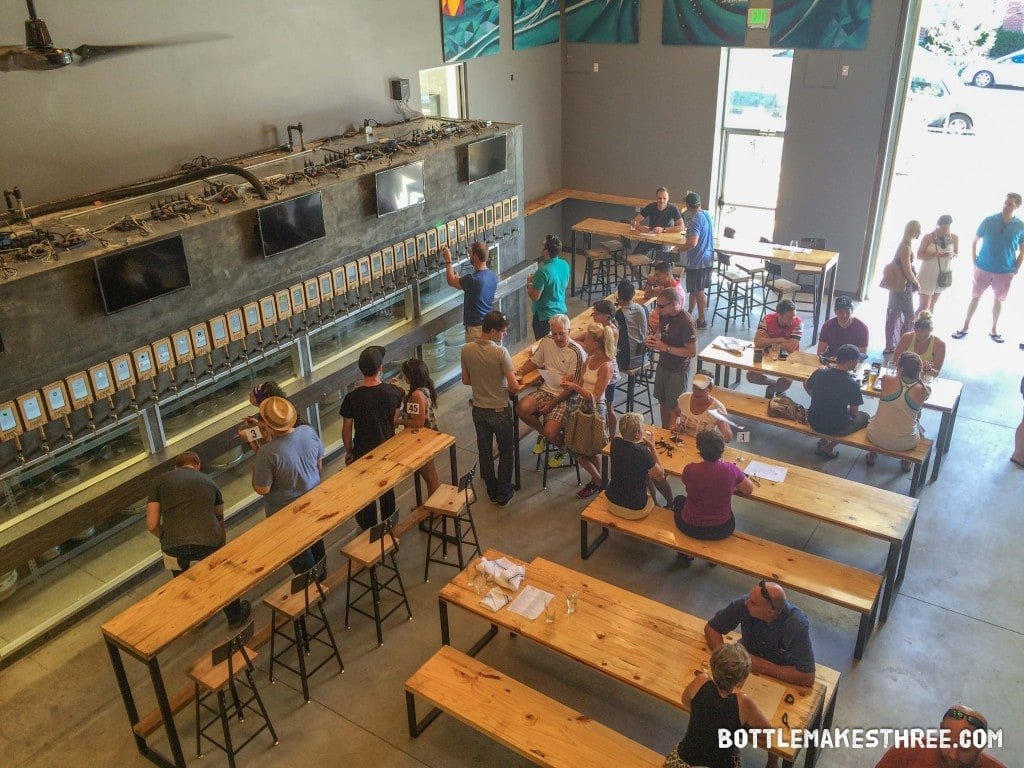 First Draft is a really fun & interesting concept, and with great beer and delicious food we think they’ll be a success. The open indoor space is large enough for groups, and the outdoor patio looks like just the place to enjoy some cold brews on a warm summer day.

Here are a few more FYIs about First Draft we learned during our visit:

We hope you go check out First Draft for yourself. If you’ve been there, or you go pay them a visit, please post a comment and let us know what you think of this new self-service taproom. 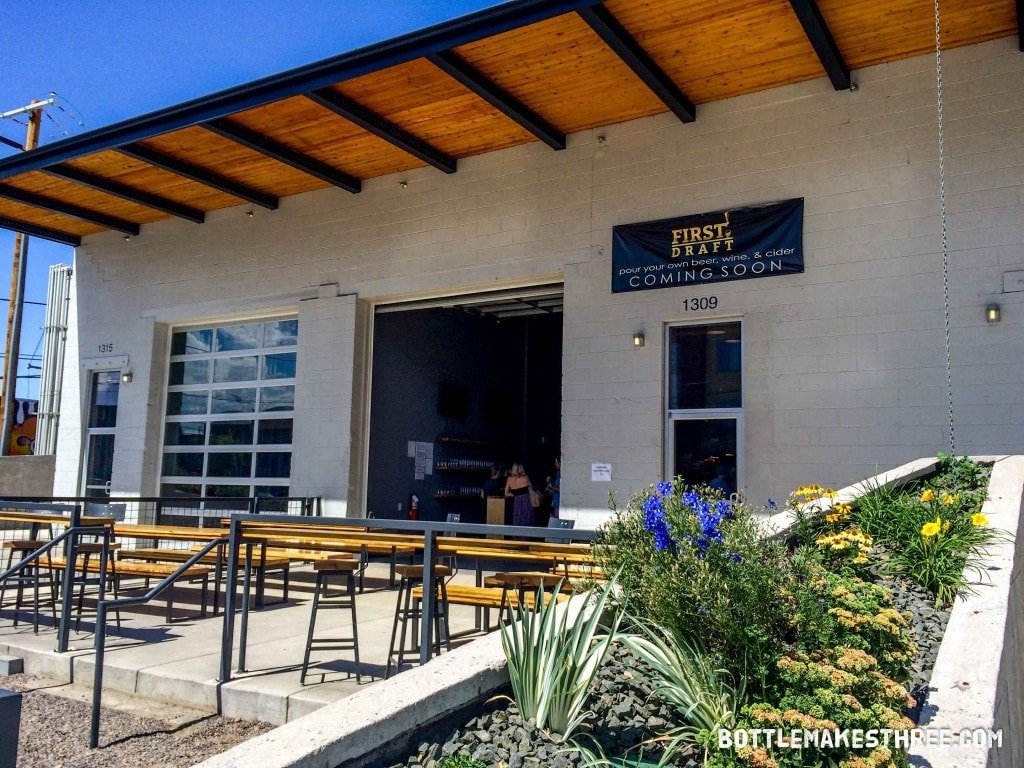