Collaboration Fest 2017: The Biggest and Best Yet

Last Saturday we attended the 4th Annual Collaboration Fest at the National Western Complex in Denver. As promised, this year’s Collaboration Fest was bigger and better than in previous years. The expanded space allowed for more brewers, more beer, and more thirsty beer drinkers. In short, Collaboration Fest 2017 was just the most fun fest yet!

There was so many great beers to be enjoyed, that we couldn’t even get to them all. There were over 100 beers and despite our best efforts, we just couldn’t do it. But are we complaining? No! Next year we’ll just have to plan better, or divide and conquer! 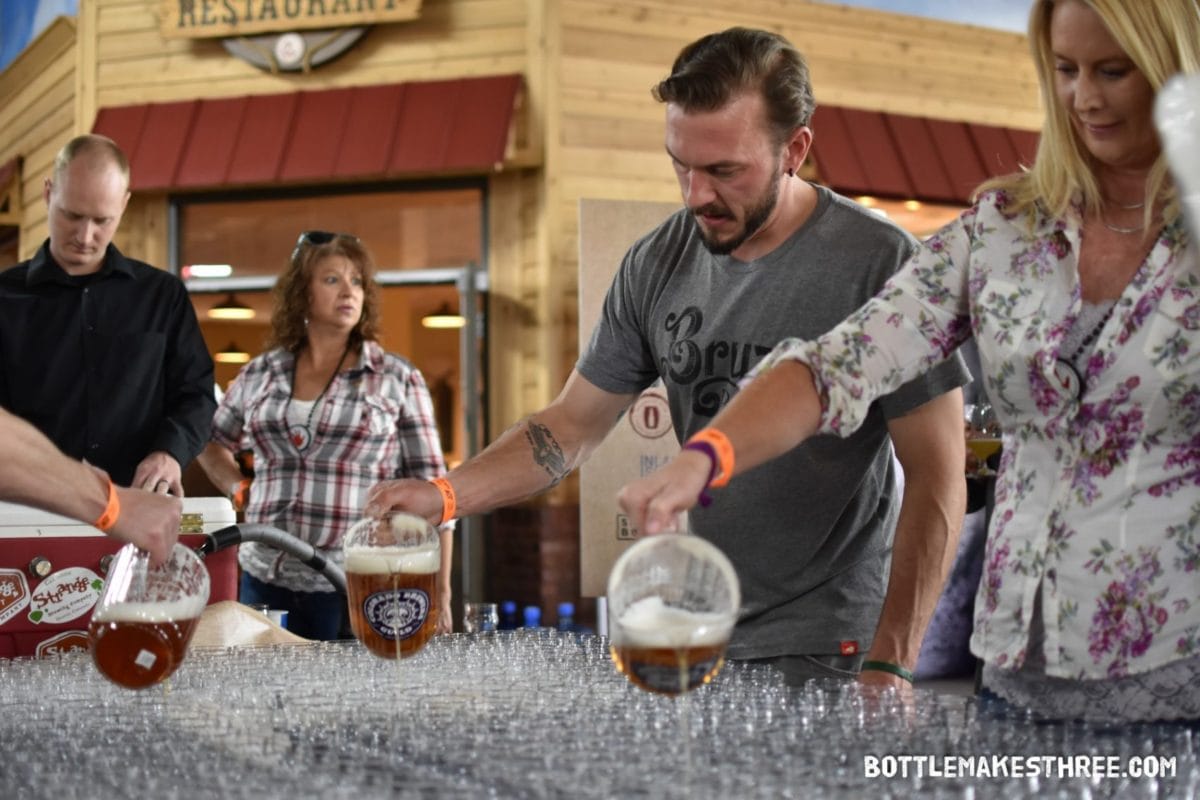 Maybe we were distracted by everything there was to take in at this year’s Collaboration Fest. It felt more like a GABF style festival, where each brewer had their own booth, all in a row, and they all reflected the personality of the breweries. The larger space also opened up room for more vendors, which was fun. We really loved meeting the fellas from Altitude Brewing & Supply, who gave us great ideas for improving our homebrew. There was also live entertainment from one of our favorites, Casey James Prestwood and the Burning Angels. There was so much to see and do between beers. It really made for a great time.

Of course, the best thing about the Collab Fest were the beers. One of our favorite collaborations this year was the Making Noise: A Pussy Riot Beer series of brews. There were five variations of this beer, each made by all female brewers, and each putting their own spin on the same Imperial Saison recipe. Originally they made this beer after the election, to support women’s rights and solidarity. It was so popular they had to make it (times 5!) for the Collab Fest. They were all excellent, truly, and we would love to see even more of these female-power collaborations. 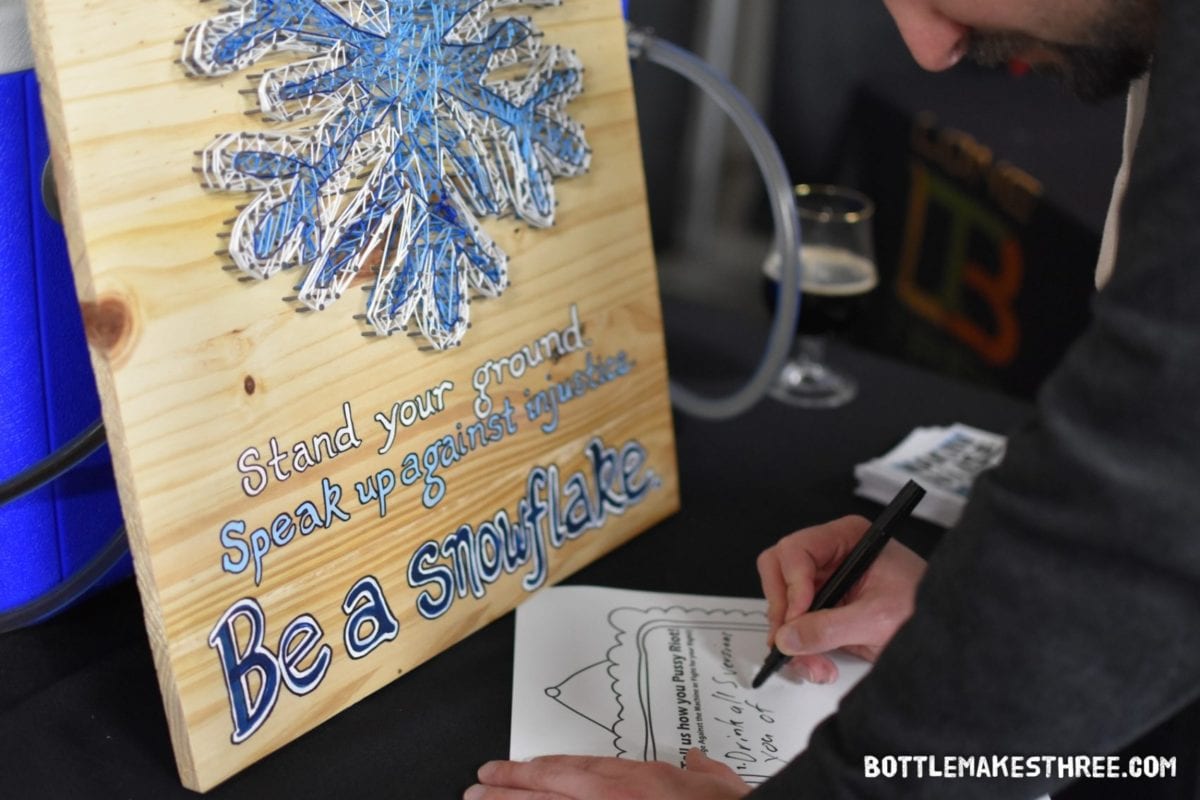 Since we’re talking politics, sort of, let’s talk about the best beer name at the fest: Enemy of the People. As pseudo members of media ourselves, we love that this was the media collaboration beer name. The beer, made with Great Divide Brewing Co and members of our local media was a fruity, New England style IPA. Given that everyone, including our own President, has dragged “mainstream media” through the mud this year, it was fun to see our local media folks embrace the ridiculousness of it all.  Best. Name. EVER.

And now since we’re now on the subject of beer names, we have a first runner-up for our favorite beer name at the fest. The fruity Berliner Weiss made by Florence Brewing Company and Bristol Brewing Company was absolutely delicious on its own, but the name put it over the top. The beer was called – Ziggy Zaggy, Ziggy Zaggy, Oi, Oi, Oi! – making it nearly as fun to order as it was to drink.

Again we have to say this is far from a comprehensive list. Collaboration Fest 2017 was so big, we ran out of time, remember? There likely were many great beers we didn’t get to enjoy. But we did have plenty of great Collab Fest beer, and these are just a few more of our favorites:

All three TRVE Brewing Co collaborations were incredible. TRVE made two collaborations with Burial Beer of Asheville, NC. Slow Death, a whiskey barrel aged dark mixed culture ale with cinnamon and lemon peel; and Ritual Knife, a brandy barrel aged black braggot. Both were amazing. But perhaps our favorite was TRVE’s collaboration with Cerebral Brewing, Brain Transplant, described as a mixed culture foeder fermented golden ale, dry hopped with Denali, Sterling, and Lemondrop. Sign us up for this Brain Transplant any time!

We were really intrigued by Über Slayer, the Japanese saison brewed by Jagged Mountain Craft Brewery and Überbrew of Billings, Montana. This beer has a lot going on, with Japanese citrus fruits, green tea, shiitake mushrooms, roasted seaweed, kelp, toasted sesame seeds, ginger and sansho peppers. We figured the beer would be unique, we just weren’t sure if that was a good thing… but it totally was! The beer was delicious! Somehow all those flavors didn’t overpower the beer, and it was light with just the right touch of spicy and fruity flavors. 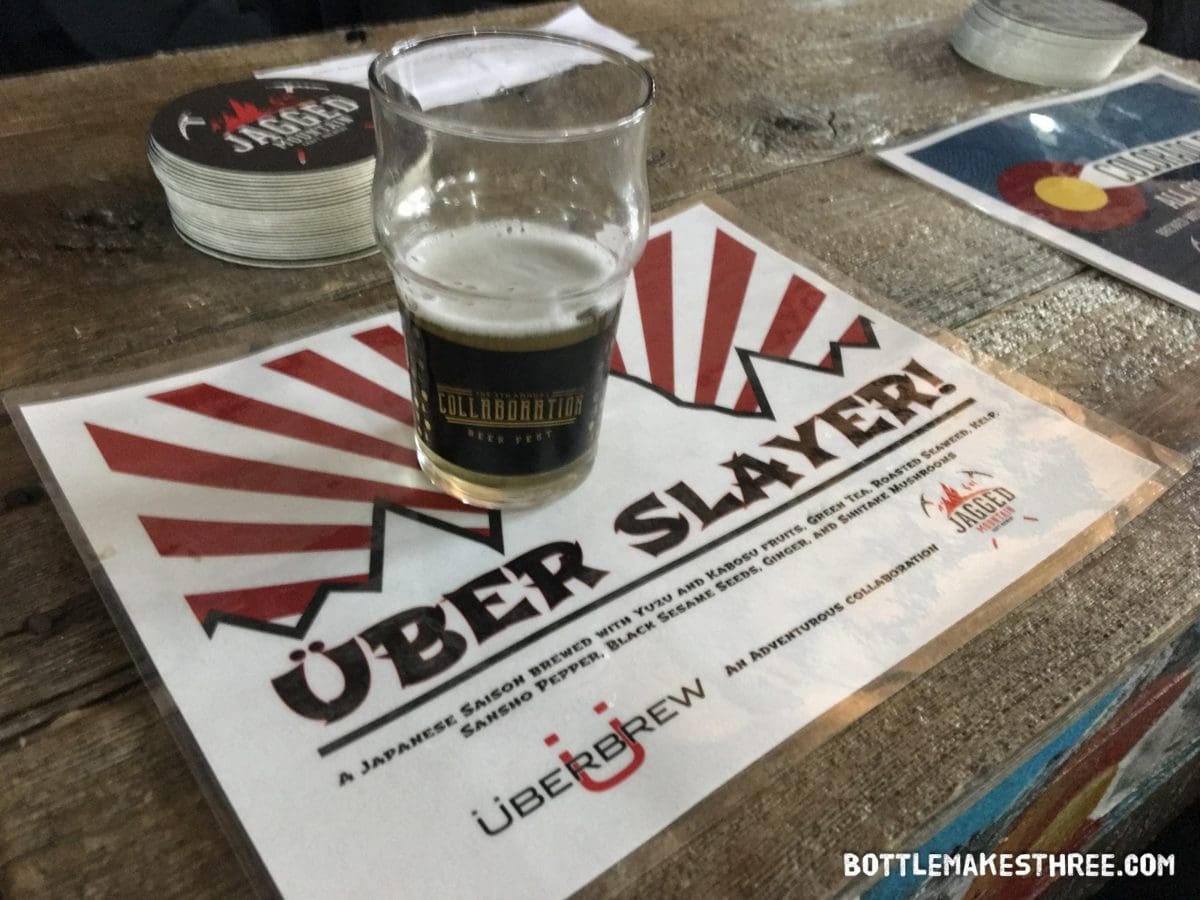 The 105 West Brewing and Chain Reaction Brewing collaboration, Intergalactichoptopia, was a deliciously refreshing peach rye IPA. Both brewers made a batch using different yeast. We tasted both and give a slight edge to 105 West Brewing for there Hefeweizen yeast version. Though Chain Reaction’s brew with California ale yeast was pretty tasty, too.

We couldn’t pick a favorite when we tried both versions of West Side is the Blessed Side, a Belgian Tripel made by Joyride Brewing and Little Machine Beer. Joyride’s version with white wine grapes and Little Machine’s version with red wine grapes were both equally heavenly. It must have been the splash of holy water added by Father Wes that made both of these Collaboration Fest 2017 beers so wonderful. 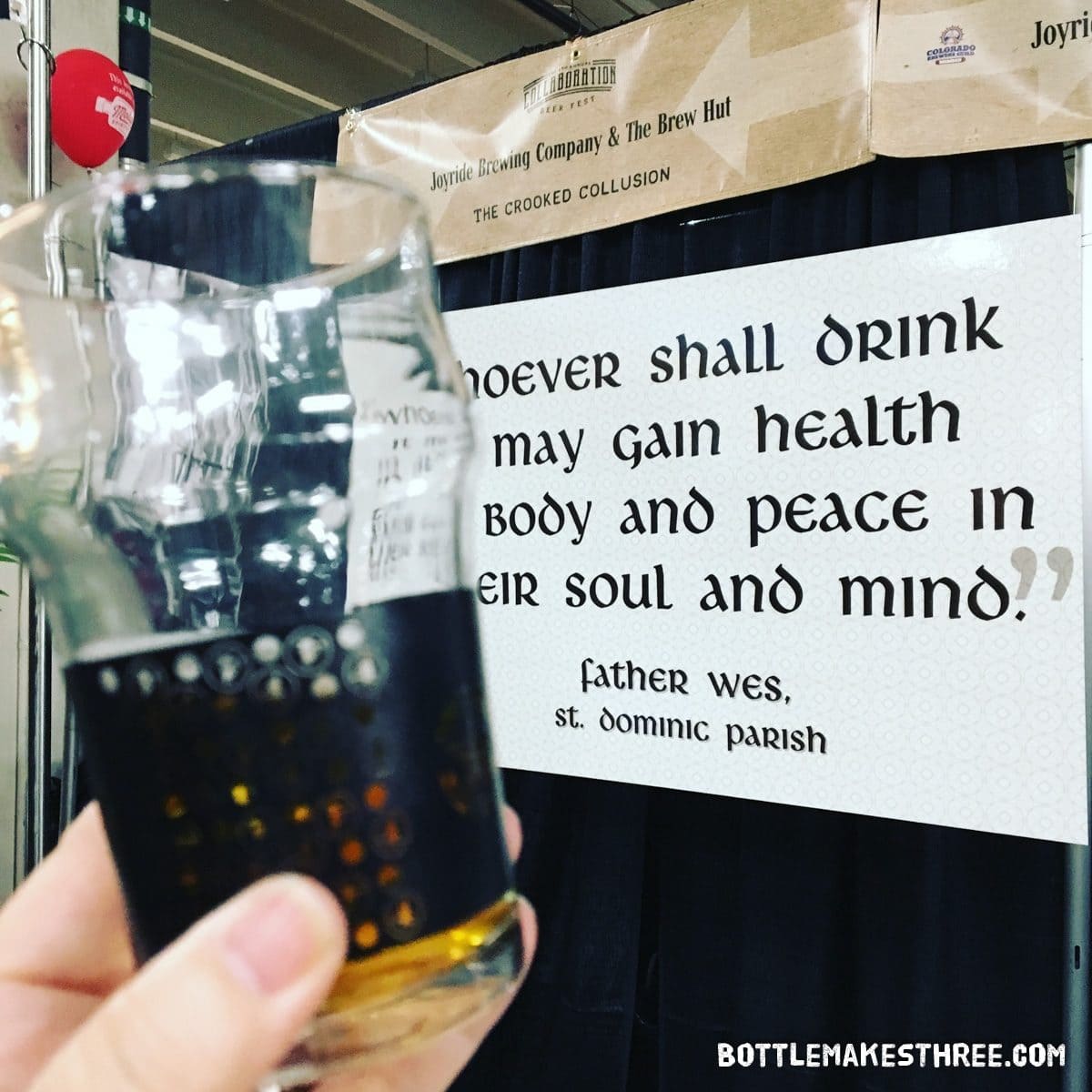 Mockery Brewing and Baere Brewing collaborated with Inland Island Yeast Co and Root Shoot Malting to create a really delicious Rum-Barrel aged English IPA called Stuck in RUMination. This beer was so delicious. The English IPA is such a perfect beer to infuse with rum. This beer really appealed to us, but that’s not all. We suspect this beer would really do well with… pirates. Seriously… and English IPA, with rum. It screams PIRATE BEER to us! Okay, maybe that was just us, but in any case, we were hooked on this great brew. Get it? HOOKED. Arrrr!

There were lots of great brewery collaborative combos, but we have to give props to Spangalang Brewery. They collaborated outside the box with The Real Dill, a local artisan pickle company. Together they made Birth of Cool, a Gose beer, lightly spiced with coriander and with fresh cucumber water added after fermentation. They served the beer with some D-Train IPA dill pickles to enjoy on the side. Okay, so this was a lot to take in… and we assume if you aren’t into pickles, you may not be excited by this one. But for us, and more specifically for me, this was all kinds of awesome. 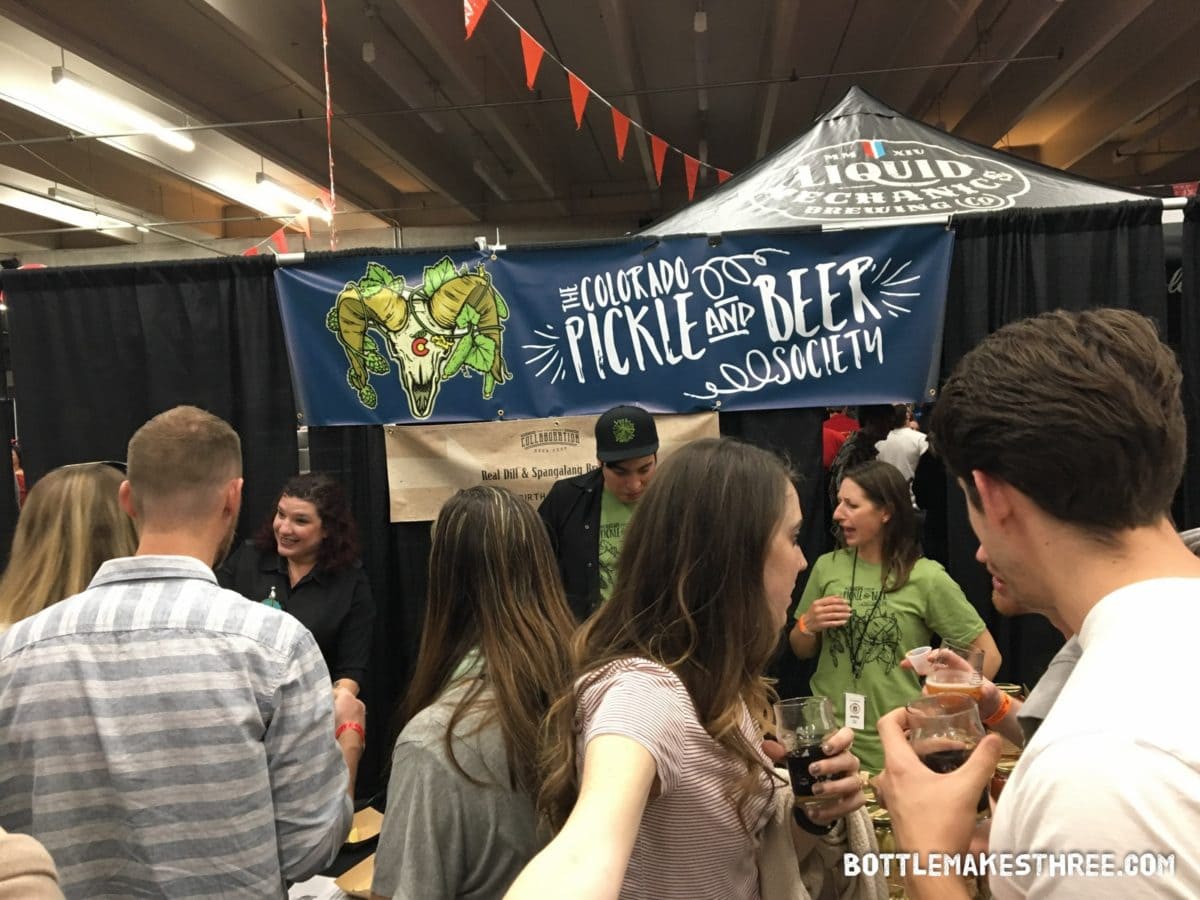 Let me break it down for you: First, the beer was amazing. It was very light and refreshing, and the cucumber perfectly complimented the slightly sour and salty Gose style. Second, the beer had a cool name – we see your cool Miles Davis reference, Spangalang! Third and most important, this was all done to kickoff an ongoing collaboration with Spangalang Brewery and The Real Dill, called the Colorado Pickle and Beer Society. My response went something like this: “OMG! There is a Colorado Pickle and Beer Society?! HOW AND WHERE DO I SIGN UP?” So yeah, I was super excited, admittedly more so than Jeff. But in all fairness, he really loved the combo too. I think I can talk him into joining The Society. Clearly, we need to do more research on this awesome new venture.

Finally, the one thing we didn’t like at Collaboration  Fest 2017

As if it wasn’t clear, we had loads of fun at the 4th Annual Collaboration Fest. We appreciate Two Parts and the Colorado Brewers Guild for inviting us to the festival. They really know how to throw a fun and fantastic party! We wish we could say it was perfect, but if we’re being totally honest there was room for improvement in one area. We don’t have a beef with the festival itself, or the beer. It’s really with this… 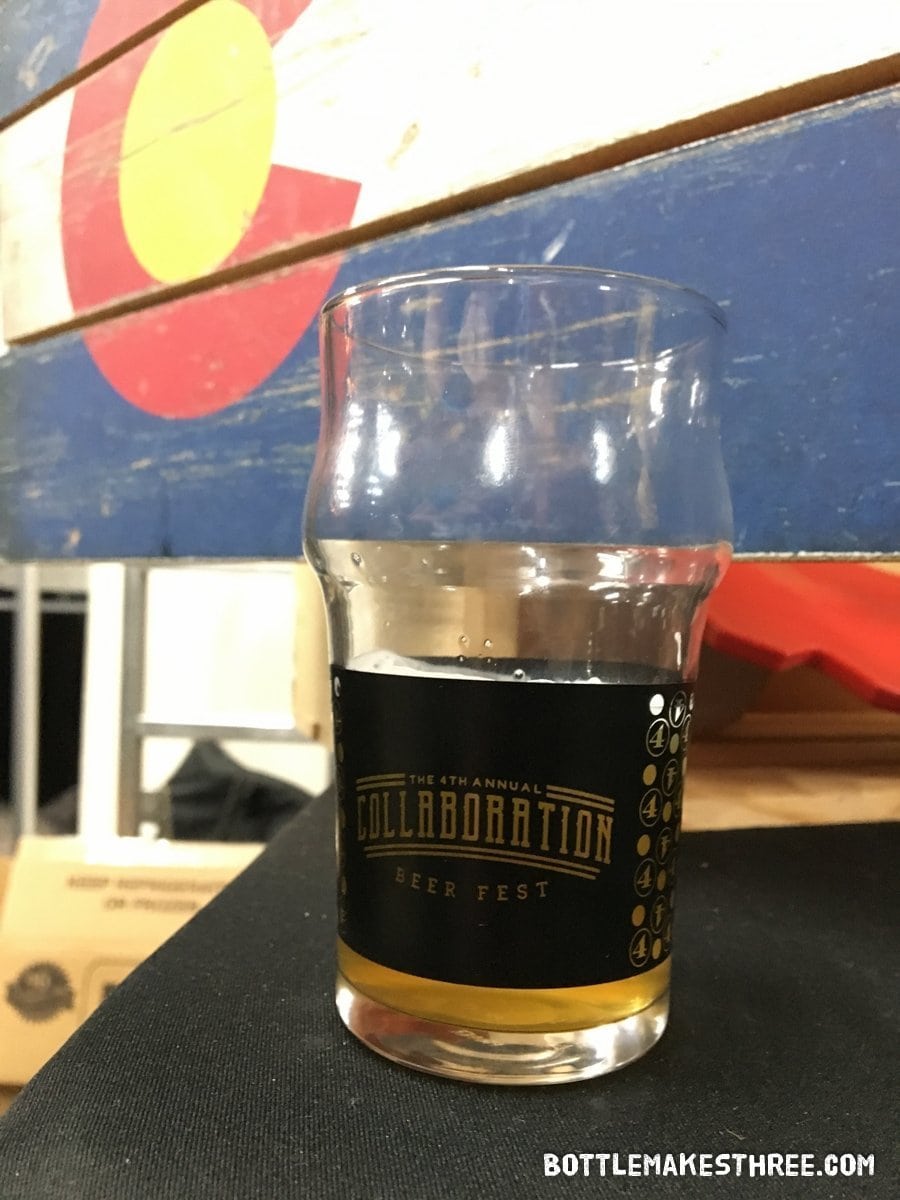 The taster glasses… yikes! To be fair, VIP attendees got some pretty sweet glassware. We borrowed a pair for the first image in this post (scroll up if you need to refresh your memory.) The rest of us received the tasting glass pictured above, which leaves a lot to the imagination. Specifically, it leaves you imagining what your beer looks like since you can’t really see it past the giant, black graphic. The beer geeks (like us) that come to a festival like Collaboration Fest want to see our beer, so this was a bit of a bummer. Hopefully next time they lose the wide black band and let us see and fully appreciate the beer.

That being said, if all we have to complain about is how our glass looked, then you know it was an awesome event. Everything poured into that glass was absolutely incredible. In fact, the entire festival was really great. It was the best Collaboration Fest ever… or at least, so far. We can’t wait to see what they have in store for us next year! 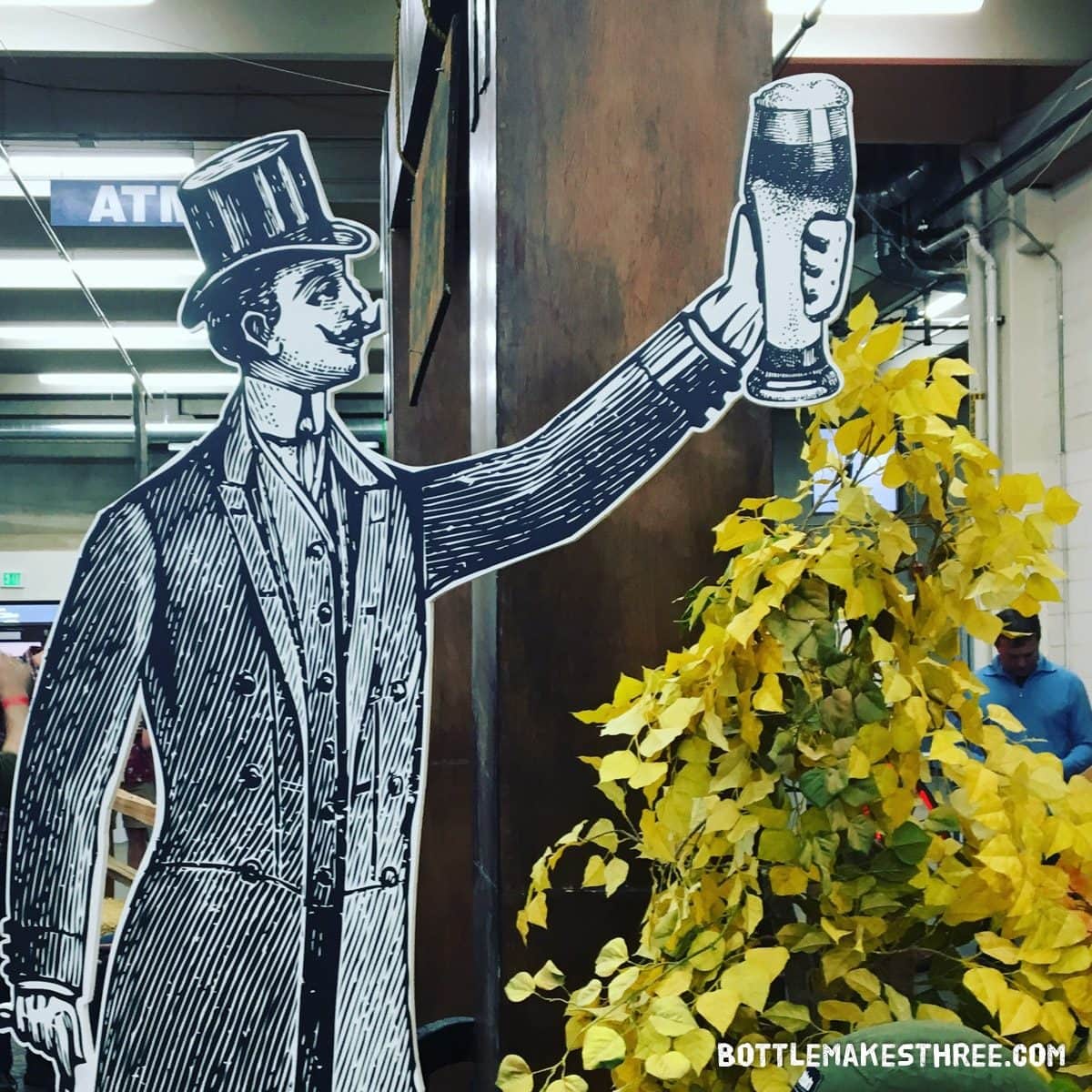 5 Years of Bottle Makes Three: Looking Back and Moving Forward