Written by Chris in Food, Spirits

Sure, I can say that now, but it wasn’t always that way. Tequila and I have had some falling outs over the years. The first one I remember happened shortly after turning 21. That’s when a night of tequila shots and dancing led to me having to shampoo out my roommate’s car the next day.  Don’t ask.  For years I couldn’t even smell tequila (or even limes, for being an accessory to the crime) without gagging a little.  Eventually we made up, but we still have our rough patches.  Like last year when I was in Las Vegas for Cinco de Mayo and I discovered how much I like Patron. I thought Patron liked me too, that is, until Patron convinced me that karaoke was a good idea.  It wasn’t, and before you ask, all evidence of that encounter has been destroyed.

Based on past experiences it was with a little apprehension that we agreed to attend an event this week sponsored by Arta Tequila. I knew Arta from their cool sugar skull logo (I love Dia de las Muertos art) but beyond that, they were new to me.  However the tasting party was being held at Machete Tequila + Tacos new location in downtown Denver, so while tequila was still somewhat suspect the tacos sealed the deal.  While tequila can sometimes be my frenemy, tacos and I are BFFs and they would never steer me wrong. We were in!

I want to preface the rest of this story by saying that the food and drink we received was complimentary, but the commentary on our food and drinks is all our own.  To summarize, we’ll show up for free food and drinks, but we won’t say it’s good if it’s not, regardless of how much free stuff we’re given.  We have integrity; not a lot, but enough.  Now back to our story… 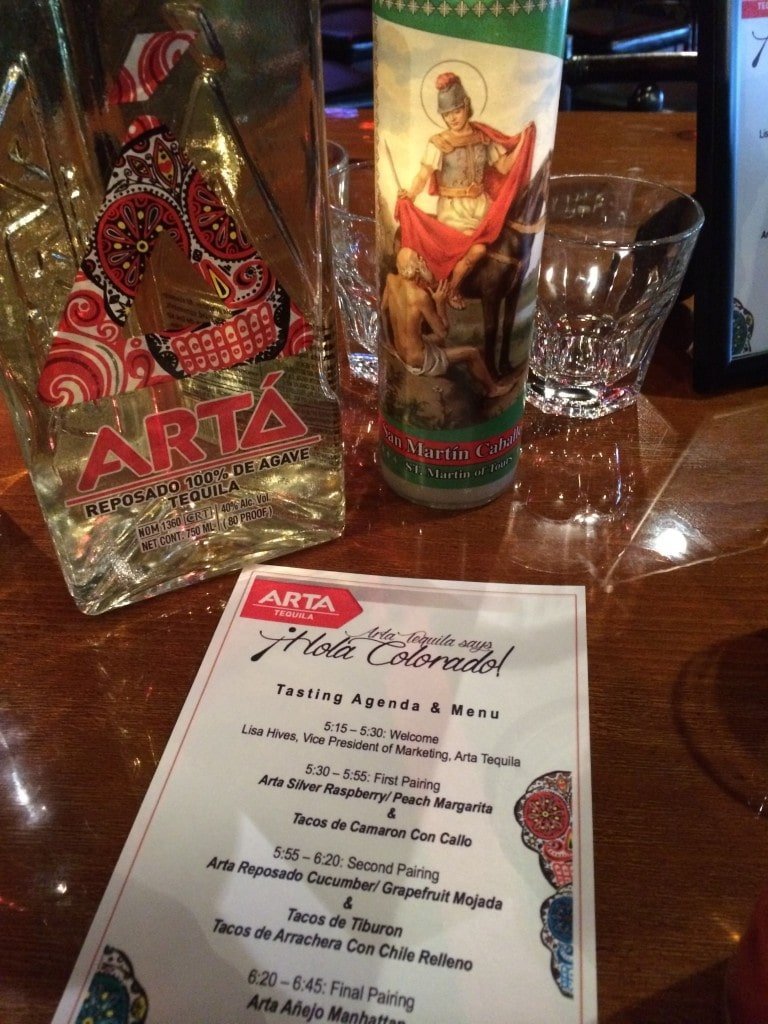 Upon arriving at Machete we got to learn about Arta Tequila and what makes them different from the other tequila brands. Arta is more of a craft tequila, focusing on quality over quantity. Their agave is grown on a 250-year-old single-family estate where they use no pesticides, and their master distiller is a third-generation distiller who goes well beyond the style requirements in aging and distilling his tequila. For example, most Anejo’s are aged 12 months, while Arta’s Anejo is aged between 18 and 30 months. The Arta Silver is triple distilled, while the style only requires double distilling. This all sounded good, but these are just words, and we were ready for them to put their words where our mouth is – or something like that. It was time to do some tasting.

Machete’s head bartender, Danielle Scott, created the cocktails for the evening, making a drink to feature each of Arta’s three styles of tequila.   Each drink was then paired with a small plate made by Jose Avila, Machete’s Executive Chef.  Over the course of the night, we learned that these two are food and drink superheros.  Really, they rocked.  I wish I could tell you in great detail about each sip, each bite, but we really cannot do it all justice. Instead, we’ll just focus on telling you about our favorites.

All of the drinks were fabulous but the best drink of the night was the Arta Resposado Cucumber Grapefruit Mojada. The cucumber and mint were pronounced and refreshingly delicious, while the grapefruit juice accented it without being too sour.  It was a fabulous summer cocktail and really highlighted how tequila can be used for so much more than just shots and margaritas.  I could easily see us drinking a pitcher of these on a sunny patio this summer.  Ideally, it would be my patio, so there wouldn’t be far to stumble once I finished that pitcher.  This drink is so delicious it could be dangerous.

The food paired with each cocktail was unique, creative and delicious, so every bite was amazing.  Our favorite plate was the second one, which contained two tacos: a Taco de Tiburon, which was a filet of lightly battered and fried shark served with a jicama-carrot slaw; and a Taco de Arrachera Con Chile Relleno which featured tender skirt steak topped with a grilled yellow pepper chile relleno.  Holy frijoles.  There are no words to even describe how delicious these tacos were. Jeff loved the shark the best, while I wanted to marry the relleno taco. They were incredible.

Overall you can say that we loved everything we were served and it’s safe to assume that tequila and I are amigos again.  The Arta Tequila lineup was all delicious and we will seek them out at our local Mexican restaurants and liquor stores.   I can also assure you that we’ll be back to Machete soon and often, as la comida estuvo muy buena!

Did I mention before that tequila makes me hablo español, y mi español no es muy bueno? Lo siento mucho.

If you’d like to try the Arta Resposado Cucumber Grapefruit Mojada for yourself, you’ll find the recipe below.  This would be a great Cinco de Mayo cocktail, and you don’t even have to go buy some of those high-priced limes to make it!  In fact, why don’t you go ahead and make up a pitcher and head on over… we’ll have the glasses waiting.

Directions:   Muddle cucumber and mint in a cooler or pint glass. Add ice, Arta Resposado and grapefruit juice. Top with Squirt or grapefruit soda. Mix and garnish with a coin of cucumber.

Featured Beer Fest & Events for May 2014