Spring has sprung people!  While we still get the occasional cooler weather pattern traipsing through our state, the sunny and warm days are beginning to outnumber the chilly ones.  It’s about fucking time, wouldn’t you say?  I mean, winter in Colorado is lovely and not even as snowy as people who live outside the state seem to imagine, but this year it’s totally over-stayed its welcome.  Spending a lazy afternoon sipping drinks on a sunny patio is what we (specifically, us Estes’) were born to do.  It’s time the weather Gods let us get down to it.

Recently we spent a long and lovely spring afternoon in Boulder with our friends Shawn and Jessica.  Our goal was to cross a few more breweries off of our Colorado Brewery Challenge list, and they were plenty game to ride along and help us out.  It’s a good thing too because we’ve been doing a pretty piss-poor job at reaching the many great breweries of Boulder County.  They seem to be outpacing us, with breweries opening so quickly we always have a long list of new spots to visit.  Boulder is an hour plus for our place, so we just don’t get there as often as we would like.  However now that spring has sprung we can’t blame our lack of effort on poor road conditions, so it’s time to buckle down and get to sampling these fine Boulder beers.  It’s a tough job, but we’re just the folks to do it…

After a quick shopping trip down Pearl Street, our first stop was Mountain Sun Pub & Brewery.  While we haven’t been to Mountain Sun before we’ve frequented their Denver location, Vine Street Pub, several times.  We already knew their beer fairly well so we decided on a some tasters of mostly seasonal brews.  We had the Hooligan Oatmeal Porter, ACE Pale Ale, Colorado Kind Ale, Bombshell Blonde, F.Y.I.P.A, and the Vagabond IPA.  They were all plenty good, but most surprising was the Mountain Mary that Jessica ordered instead of beer.  We had a sip and instantly wished we’d opted for this delicious house-made Bloody Mary topped with Old School Stout and served with a strip of crispy bacon. MMM…Bacon!  Jessica taught us to not overlook the cocktail list, even at a brewery, something we’ll remember next time. There’s no photo evidence of the Mountain Mary, but trust us that it looked and tasted delicious.  Instead, enjoy this photo of our flight of beautiful beers: 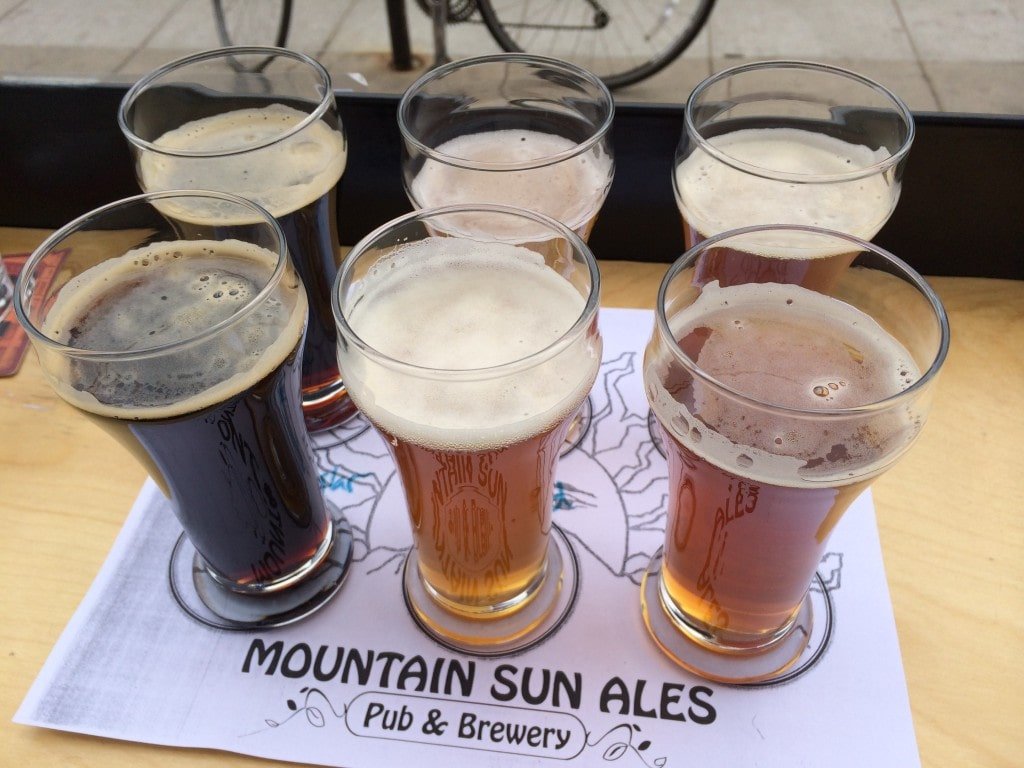 Our second stop was to Twisted Pine Brewery.  We had visited Twisted Pine before but Shawn and Jessica had never been there, and since they are a big favorite of ours it didn’t take much to convince us to stop.  At Twisted Pine we had another flight including beers spicy (Billy’s Chilis) and sweet (Rhesus Peanut Butter Stout) and everything in between (Pineer Pumpkin and Hop Ocelot).  All were excellent, as were the nachos we shared to accompany the beers.  For good measure, we even grabbed a few bottles of Ghost Face Killah to go.  Now that we know it’s healthy to marinate your meat in beer before barbecuing, we can’t wait to try some Ghost Face fajita marinade.  Yum!

Next up was Sanitas Brewing Co., a place the waiter at Mountain Sun recommended when we told him about our brewery crawl.  That waiter did not steer us wrong, as Sanitas was probably our favorite spot of the day.  Sanitas Brewing has a wonderfully beautiful space, inside and out.  Their patio is perhaps one of the best we’ve visited at any brewery.  It’s large and secluded from the road, with cornhole and/or bocce ball area below the patio and a permanently installed McDevitt Taco Supply stand just off the patio, cooking up some muy bueno street tacos.  They’re just along the train tracks so if you plan your visit right, you’ll get to watch a freight train or two barrel by, which is super cool. 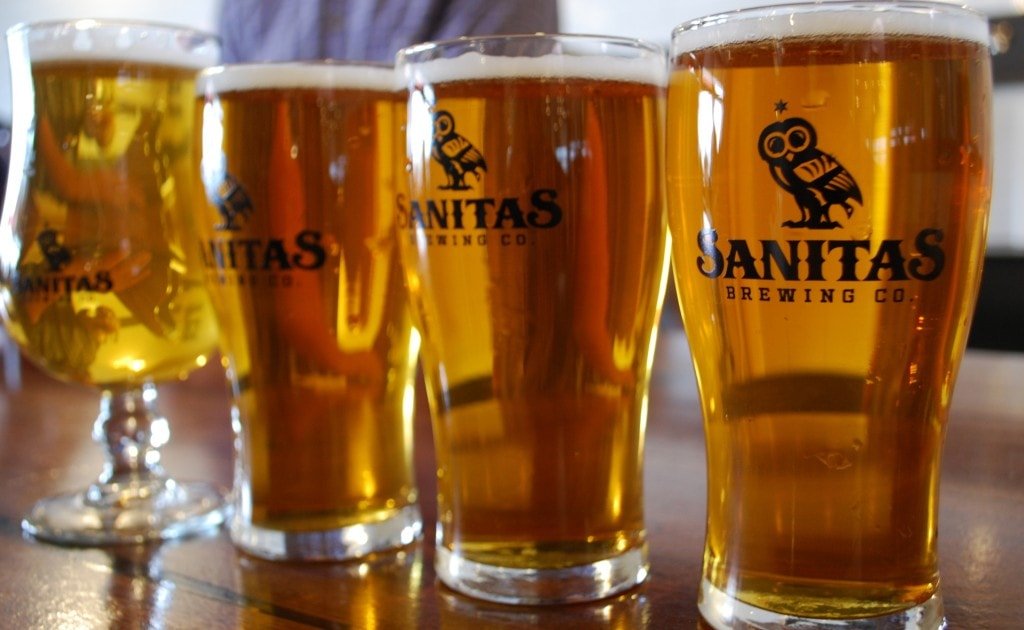 At the bar, Jeff struck up a conversation with Chris Coyne, co-founder and brewer at Sanitas Brewing.  Chris was a super friendly guy and nice enough to offer us an impromptu tour of the brewery.  Chris brewed for more than 10 years at Boulder Beer and gave us some insights on making the move from working at a well-established brewery to opening your own.  He showed us around the brewery, once an old warehouse that offers plenty of room for distribution and growth, something that makes Sanitas Brewing well poised to expand as business increases. We also got to see their cans, featuring a new fully removable lid to help drinkers get a full sensory experience and better aroma from their canned beer.  Finally, Chris told us about the owl image that is the Sanitas Brewing logo.  Apparently, it was a close-up experience with an owl outside Boulder Beer after a late night of brewing that inspired this awesome owl logo.

Sanitas Brewing’s location and staff were so wonderful that there’s a good chance we’d be raving about them even if their beer wasn’t so great. Fortunately, their beer was pretty freaking awesome!  They had Boulder Common on tap, a combination California Common and IPA that they brewed with Boulder Beer for the recent Collaboration Festival.  It was one of the few collaboration beers we went back to again and again, and it was just as good as we remembered it being.  Their Bird of Prey Double IPA was also really great.  It packed a big punch at 100 IBUs and 10.7% ABV, so the fellas were limited to one so we could keep this pub crawl going.  After a few delicious Sanitas Brewing beers and couple of tasty tacos, we reluctantly moved along.  You can bet we will be back again soon.

After Sanitas Brewing we headed to BRU Handbuilt Ales + Eats.  There were plenty of delicious looking, unique beers on tap but we stuck with just one each:  The Solus for me, and the Rigley Red Rye IPA for Jeff.  Both were fine ales, but to be honest the beers were starting to get to us at this point in the day.   When we found out it was happy hour the focus quickly moved from drinks to food.  BRU has an awesome happy hour menu featuring small plates so we ordered a bunch of noshes to share, including a corn dog made with a delicious cheese-stuffed sausage, a fresh pretzel with sea salt and beer mustard, some caramel corn beer nuts and some crusty bread with whipped honey butter that was heaven in my mouth.  The feast at BRU may have overshadowed the beers with our group, but we can say with certainty that everything was delicious.

The final stop of the day was Avery Brewing Company.  We’d stopped here one-time last summer but it was too crowded and we didn’t stick around for a beer.  Avery is building a new, bigger location that should open later this year, and for one we cannot wait as they’ve clearly outgrown this site.  They were almost as busy this visit but we were much more determined.  Unfortunately, we were really on autopilot by this point, having had so many beers throughout the day.  Still, since Avery offers several beers in their tasting room that is hard to find elsewhere we decided we could manage one more pint.  Here Jeff had an IPA, while I had the Lilikoi Kepol, a witbier with strong notes of tropical fruits that was the perfect final beer for this warm and sunny spring day. 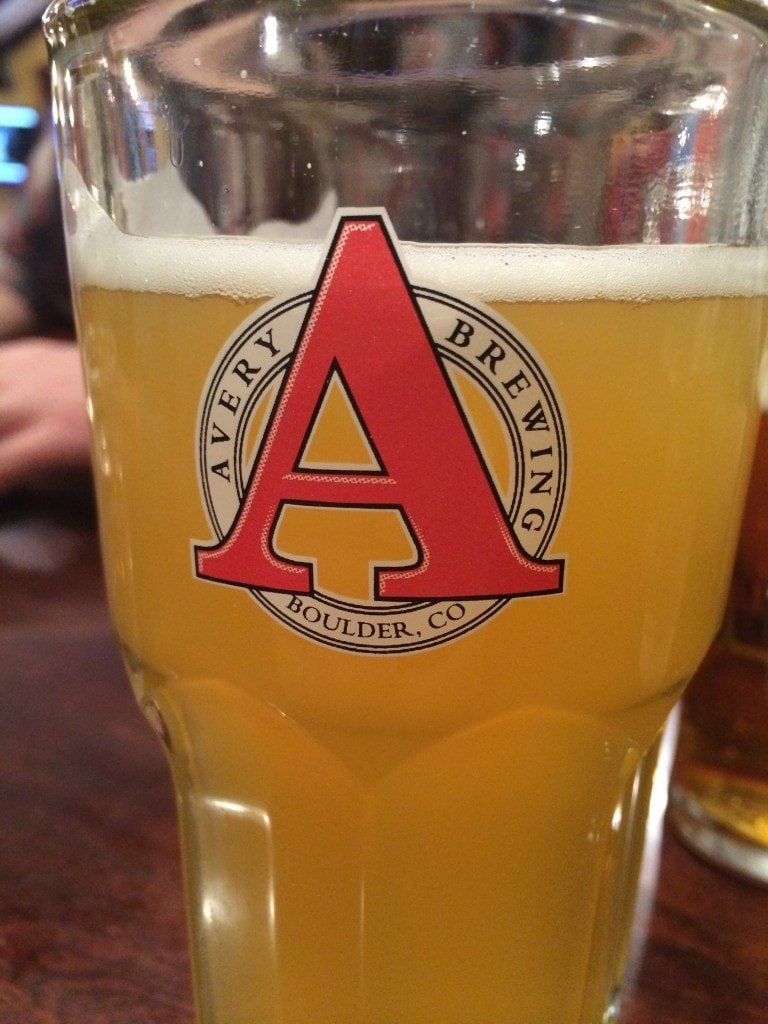 Overall it was a whirlwind tour of a few great Boulder beer spots, and we still have many more yet to visit!  We won’t wait too long before heading out to do this all over again.  If you have suggestions for our next Boulder brewery crawl, give us a shout out in the comments below to let us know.  If you want to accompany us next time, fine by us… we can always use a designated driver!