Last weekend Denver welcomed a new member to the local craft brewery scene: Mockery Brewing Co. We stopped by the new brewery on Sunday, when we knew things would be a bit more subdued than their Grand Opening a few nights before. Mockery Brewing is just off Brighton Boulevard in the RiNo neighborhood, a stone’s throw from The Source, home of Crooked Stave, and adjacent to the construction project that will soon become Great Divide Brewing’s new location. We can already picture craft beer lovers stumbling between these three breweries once Great Divide construction is complete. What we wondered was, how would Mockery Brewing hold up the scrutiny they’d face when Great Divide and Crooked Stave fans popped over for a sample. Our answer? We think they’ll hold their own pretty damn well. 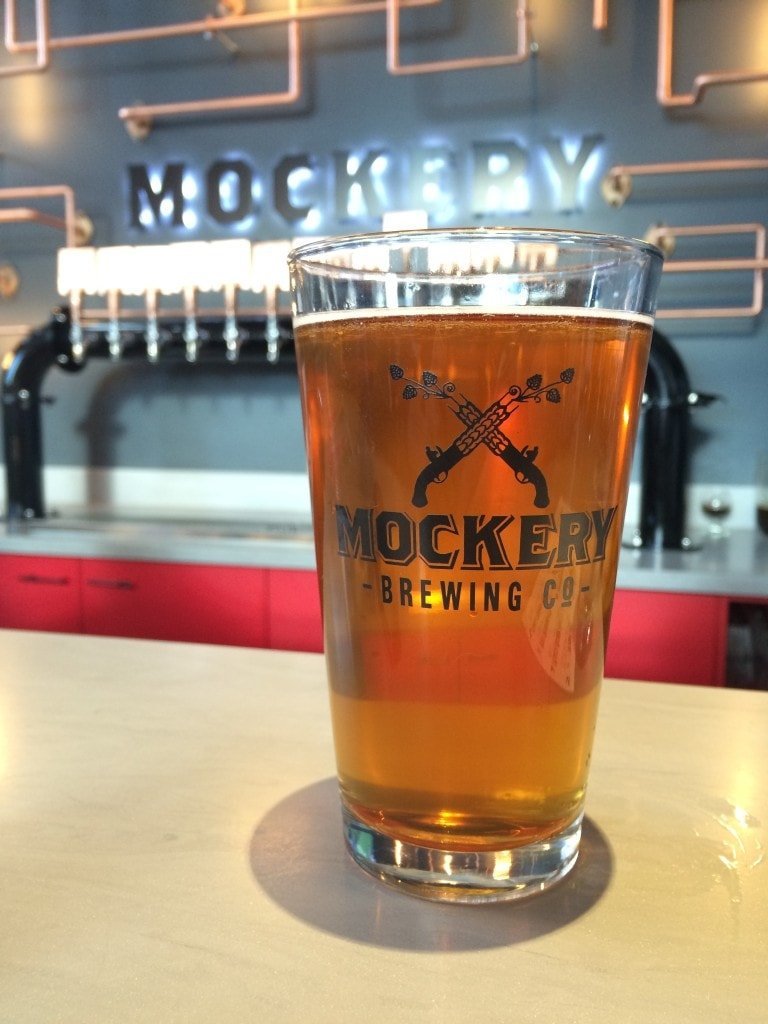 Mockery Brewing was pouring eight beers when we visited, including an easy drinking Blonde Ale and her Peach Blonde Ale counterpart (with, what else – a boatload of peaches). There was also a Red Session IPA, Black IPA and Oaked Southern Hemisphere Black Pale Ale for those who like their beer a bit more hoppy. They rounded out their beer list with a Rye Saison, Salted Scotch Ale, and Vanilla Bourbon Porter.

All the beers were good, but this time around we decided to do things differently and each pick our top three favorites. Here they are:

The other beers were good, but those were our favorites. Maybe the spicy burrito inspired some of those choices, you never know.  Sadly, the Pumpkin Ale they anticipated having for their opening wasn’t quite ready. Apparently, it wasn’t perfect yet, so they held it back. If we were scoring we’d give them bonus points for not serving a beer just because the brewery was opening. That’s a mistake too many new places make, so we’re happy to see Mockery Brewing does things differently.

Another nice thing about Mockery Brewing beers is that while they were all delicious, they weren’t all incredibly high in ABV. We like sampling, and with ABVs in the 5%-6% range, we didn’t feel hammered when we left. This will be a good thing when Great Divide is open next door, pouring their big, strong brews. We think Mockery Brewing is just what someone needs after those high ABV beers, but that’s just our 2-cents. 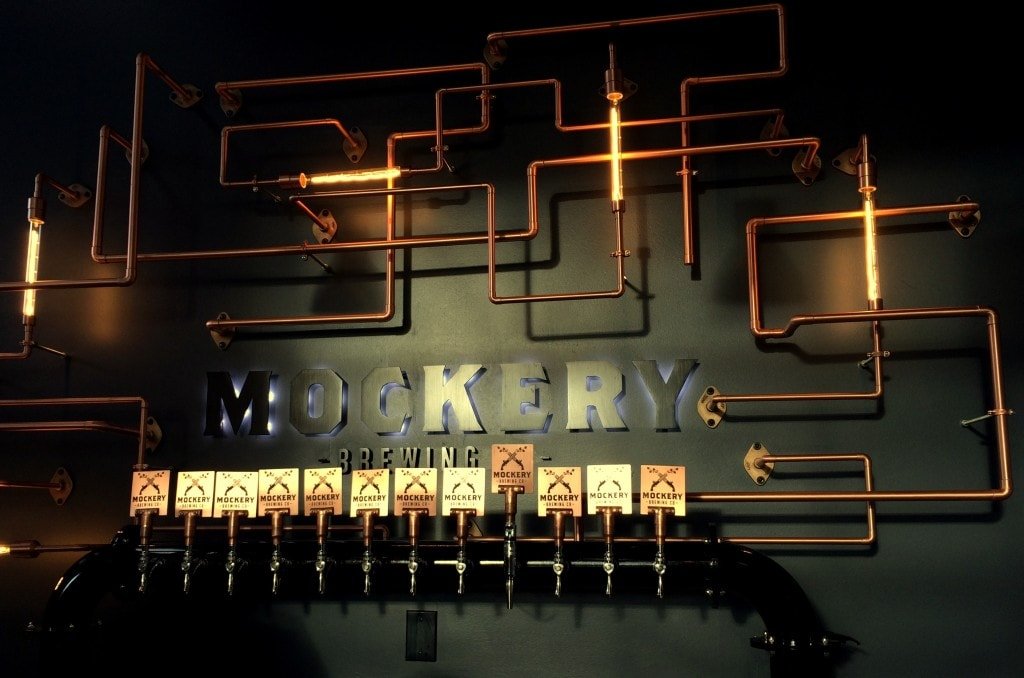 Beyond the Beer at Mockery Brewing

Mockery Brewing is gorgeous. From the outside, it’s a pretty normal looking brick building in an industrial area, but inside is simply beautiful. With bright pops of red and copper pipe accents, we loved it. They have large TVs and great sound, making them the perfect spot to take in a Bronco game. As impressive as the brewery was, the coolest touch may surprise you: the bathrooms! How often do we rave about brewery bathrooms? If you said never you’d be right, because most of the time the bathrooms are something to deal with, not to write about. At Mockery Brewing they didn’t skimp on the bathrooms, which is stunningly done in all black. Everything – the sink, the toilet = was all black, with more copper pipes and antique lighting adorning the walls. If you look closely, the wallpaper is black on black, adorned with their Mockery Brewing two-gun logo. It’s those little touches that make this the best brewery bathroom in Denver, hands down.

Outside the main brewery/tasting room is a small biergarten, complete with picnic tables and strings of lights. On the other side of the biergarten is a separate space dubbed the “game room,” where there are more tables, some nice artwork, and, you guessed it, games. There was also a forklift in there, but that could more of a temporary storage situation and less of a toy you can play with, despite what Jeff may tell you.

We liked everything about Mockery Brewing Co. The beers were very good, all very unique and delicious, with something on the menu to appeal to everyone. They were solid brews and not your typical boring styles. The space is beautiful and welcoming, and the people there were as friendly as they come. We recommend you go check them out! Go grab a beer and play with the forklift – Jeff says it’s okay.*

*P.S. Don’t ever listen to Jeff when it comes to heavy equipment. You may not play on the forklift. No!