If there is one thing true about people who live in Colorado, it’s that we’re all fiercely proud to live in Colorado. You can find our state flag on hats and hoodies, shirts and stickers, and just about everything in between. We probably have at least a dozen items in our house emblazoned with our Colorado state logo, and that’s a conservative estimate. And get this: neither Jeff or I were even born in Colorado! Yes, we’re both transplants, him from Arizona and me from Florida, but we’ve both been here long enough to consider Colorado home. Besides, neither of us has any recollection of wearing our other state logos around, so that should count for something. We’re practically native Coloradans now. We know the state song is “Rocky Mountain High,” the state flower is the Rocky Mountain Columbine, and as a matter of fact, the state bird is the Lark Bunting. Okay, we had to Google that last one, but it still counts. Most of all, we know that Colorado joined the union in 1876 as the 38th State, and 38 State Brewing Company is exactly where we headed last weekend for a few craft brews.

38 State Brewing opened last May, for, as their website states “…the entire population of blue collar, white collar, and no collar beer drinkers of the world.” Cheers to that! The owners are friends who started as homebrewers making great beers in their garage. Now they’ve moved up to a brewery and a taproom in a much larger garage, so we can all hang out and enjoy their brews. The space is large and comfy, well designed with plenty of tables, huge roll-up doors with windows, and a large patio. When we dropped by early on Saturday evening it was so unseasonably warm that they had their roll doors open to let in the cool evening breeze. These 70-degree days in late November are like a gift and yet another reminder of why we adore living in Colorado.

On the evening of our visit 38 State Brewing had six beers on tap: Spiced Belgian, Midnight Soul American Stout, Eduardo Sanchez Tequila Saison, You’re F’n Out Stout, Belgian Pale Ale and an American Brown Ale. To be honest, it wasn’t our typical lineup; usually, we’re more into the hop-heavy IPAs. Still, we were game and we tried them all, and found three solid favorites. We both loved the Spiced Belgian, Belgian Wit Bier spiced with orange zest, coriander, and white and black peppercorns. It was light and spiced nicely, so that none of the spice flavors overwhelmed the delicate beer. Also good was the American Brown Ale, a rich and chocolatey brew, and the You’re F’n Out Stout, a creamy, full-bodied stout with a solid coffee finish. The other three beers didn’t really tickle our fancy, but considering there were no IPAs three out of six is pretty solid. We can’t wait to come back for some of their upcoming batches of brew. Since 38 State brews on a very small system, their beers turn over quite often, giving them an opportunity to experiment with lots of styles and flavors. In the works, they have an IPA, Double IPA, and several other beers we can’t wait to taste. I guess that means we need to head back soon!

Beyond the beer, we were pretty impressed that with the calendar of happenings at 38 State Brewing Company. They seem to have something fun happening almost nightly, including live music, trivia, food trucks, and more. During our visit, Alex Williams was playing an acoustic set and there was a food truck cooking up Italian specialties. If you need more fun than that, they have a whole separate room full of games such as corn hole and foosball where you can challenge your friends and let loose. They also seem to have regular special events, like the Holiday Celebration planned for Sunday, December 21st where you can put on your ugliest holiday sweater and join in the festivities with a crock-pot potluck and a cookie contest. FUN and YUM! 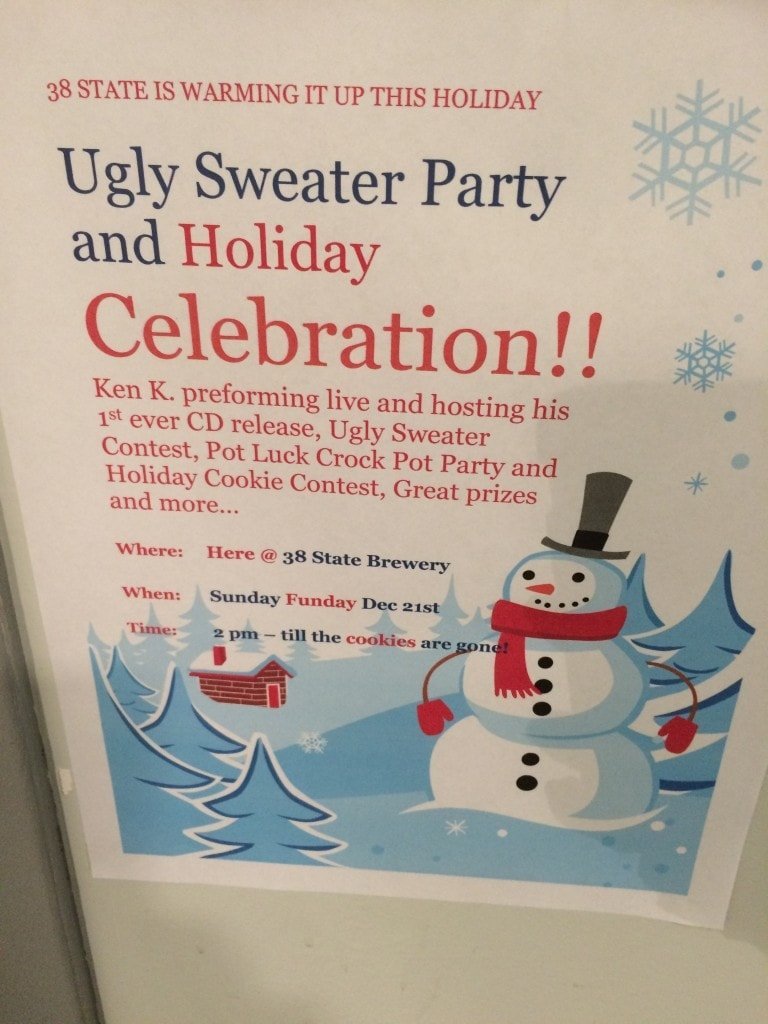