In our last post, we visited the Anheuser-Busch Brewery in Fort Collins. Sure, visiting the big beer maker was interesting, but no visit to Fort Collins is complete without checking out their incredible craft beer scene. In previous trips, we’ve already visited New Belgium Brewing, Odell Brewing, and Fort Collins Brewing Co. This time we decided to get through a few more new, or new to us, craft brewing spots. There is certainly not a lack of great options, with at least 15 craft breweries in the city plus more in neighboring towns. During this visit we managed to pay a visit to four of them: Equinox Brewing Company, CooperSmith’s Pub & Brewing, Freedom’s Edge Brewing, and Black Bottle Brewery.

Here are our first impressions of the breweries we visited during this Fort Collins trip:

We arrived at Equinox Brewing Company just after opening time, but there were already a handful of people at the bar. The tasting room itself is fairly large, though it’s divided into three different spaces plus a patio out back, so it feels cozy. We selected a seat at the bar where we could take in everything. Things were pretty mellow, but the disco ball hanging from the ceiling gave us the impression that Equinox has a wild side, too. The walls were bright and covered with unique art, and the space was really homey and comfortable. The unusual thing was that you couldn’t actually see any of the brewing equipment from the tasting room, certainly not the norm for most new craft breweries. We did see several brewer-looking types coming and going from a door behind the bar, so we trust that was where the magic happens.

Equinox had about 17 beers on tap during our visit, and knowing we couldn’t taste them all we ordered their Standard Tray, a flight of 6 of their drafts: Sky Rocket Pale Ale, Black Hole Sun Ale, Gard’n Gnome Bier de Garde, Crazy Cliff Rye IPA, Jonas Porter, and Space Ghost IPA. It was a nice, well-rounded sample of their offerings and all were pretty true to style. We both like the Sky Rocket Pale Ale quite a bit, though Jeff was not pleased that it got the song Afternoon Delight in my head, because I ended up singing it the rest of the day. Both IPAs were also excellent, but I’d give an edge to Space Ghost IPA just for the Space Ghost reference that made the cartoon nerds in us happy. 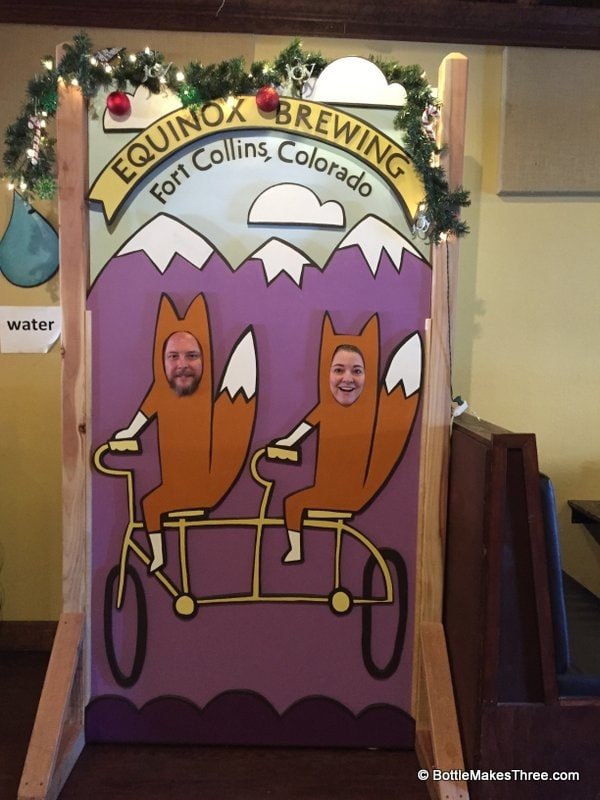 Overall we thought Equinox Brewing Company made some really good beers and were surprisingly a lot of fun. We loved the clever beer names and tongue-in-cheek descriptions, and how many places offer you an opportunity to get a picture of yourself as a fox riding a bicycle? We will definitely visit again, as we look forward to trying some of their specialty brews, and seeing that disco ball in action.

Located just a short walk from Equinox Brewing was our next stop, CooperSmith’s Pub & Brewing. CooperSmith’s is a pub with a full menu, full bar, and plenty of beer options. They’ve been in Fort Collins for 25 years, and the way their business is laid out we got the impression that they’ve grown quite a bit during that time. They have a few separate things going on in this one location. First, there is the actual brewery, which is across from the CooperSmith’s Pub and adjacent to CooperSmith’s Pool Side. Pool Side is a pool hall with beer and bar food and seems to just be open later in the day. We visited the Pub for a few pints and a snack.

We’re always a bit leery of brewpubs, as you never know what the real focus is until you get there. Sometimes the food is good but the beer is clearly done as an afterthought, and other times the beer is good but the food is meh. CooperSmith’s seems to be one of those rare places where they do it both well. There were 18 beers on tap, including a lot of variety – everything from pale ale to barleywine, and even a cider. Some sounded really unique, like the Sigda Green Chili or the Very Berry Gose. We were pretty tame with our choices, getting a Back in the Saddle IPA and a Pouder Pale Ale. They were solid beers, very good but not incredibly remarkable. Next time we’ll try some of their more specialty brews. What was pretty remarkable was the pretzel we paired them with, served hot and salty with a side of beer mustard. It was very tasty, and the rest of the menu looked pretty good too. We would have hung out longer but they were packed, and the only seats we found were at the bar by the door. The freezing air that came in every time that door opened encouraged us to move on. Next time we’ll plan better, stay longer, and try more of their beers.

Next on the agenda was Freedom’s Edge Brewing Co. This may be the one of the smallest, if not the smallest, brewery in Fort Collins with just a 3-barrel brewhouse. When we stopped by we met Shane, one of the brewers who was working the bar the day of our visit. Shane gave us some of the background of this family-run business. Freedom’s Edge Brewing Co was actually started just north of Fort Collins in Cheyenne, Wyoming. The Cheyenne location opened in 2012, and this Fort Collins location opened in early 2014. And when we said this was a family business, that wasn’t just talk; Tim Moore owns the breweries, and his wife and daughters manage the front of the house. Shane is married to one of those daughters, as is the other brewer, Adam. Yep, it’s a true family operation.

The tasting room at Freedom’s Edge was instantly welcoming and cozy. It’s a small space, but well adorned with dark woods and red and black accents that made the space feel homey. Even the one unisex bathroom was large and embellished with decorative touches that made it feel a lot more serene than your typical brewery bathroom. The inspiring quotes on the wall added a lovely touch, and we especially liked this one: 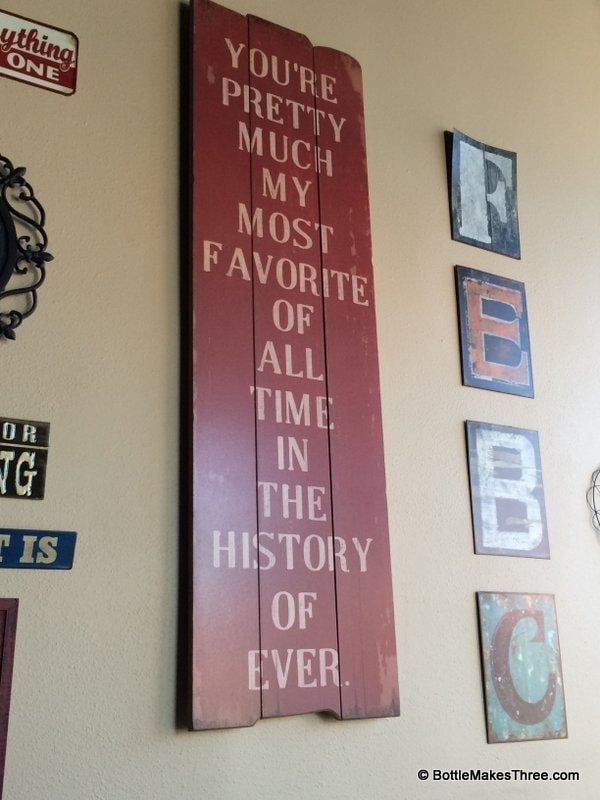 Because of the small size of the brewhouse, bad weather caused some delivery delays that resulted in only six beers being on draft during our visit. We ordered a sampler flight of them all. The big surprise and our clear favorite was the High Noon Chili Ale. We both agreed that this was probably the best chili beer we’d ever tasted. Jeff normally hates chili beers, but even he loved it. The beer had all the flavor of fresh jalapeno and Serrano peppers, but without too much spice that would overwhelm the flavor. It was fantastic. The other beers we tried were good, but that chili beer was excellent. 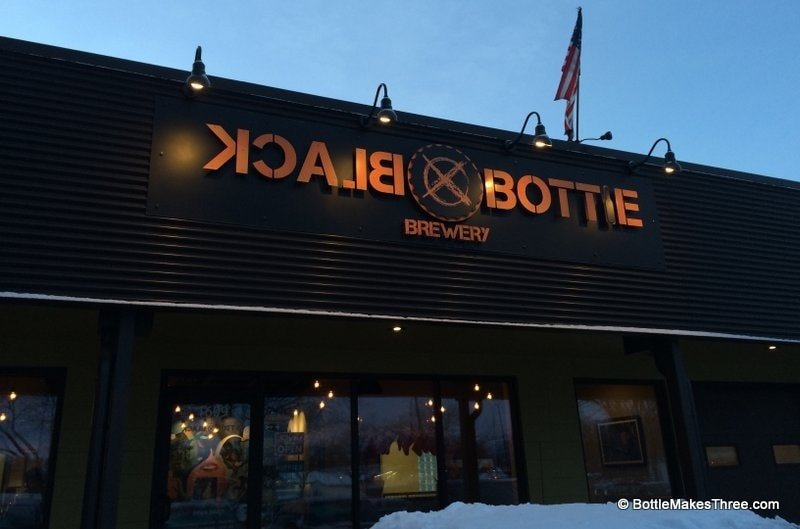 Finally, our last stop was Black Bottle Brewery. This was the brewery we were most excited about, as they’re a big favorite of ours at beer festivals. Plus the Black Bottle crew seems like a fun bunch of folks who don’t take themselves too seriously but take their beer very seriously.  Not sure what we mean? Just check out some of the videos on their website, like this one. The atmosphere was awesome, busy and bustling with plenty of fellow drinkers. The location itself was industrial but welcoming. Plus there were plenty of taxidermy squirrels drinking beer used in their decor, which always adds to a places’ charm.

Black Bottle Brewery offers a bunch of house-made beers, plus guest taps and bottles. We picked six Black Bottle Brewery beers from their extensive beer menu: Hipster IPA, Rogaine for Men IPL, Cool Runnings Belgian IPA, Static Age Stout,  Cerealiously Sugar Cookie Toast Crunch, and Ginger, a red ale. All of the beers were excellent. The two that stood above the rest were the Hipster IPA, a nice and bitter American IPA; and the Static Age stout, an absurdly delicious hazelnut coffee breakfast stout.  Black Bottle also has a full menu of eats and sharable plates, and we split (yet another) pretzel. I know – totally predictable – but let me assure you this was worth it. The pretzels were delicious and the queso and mustards on the side were outstanding. It was so good I can’t show you a picture, we were too focused on stuffing it in our faces and didn’t snap a pic.

After this trip, we realize we have a serious dilemma. With Fort Collins being a few hours away from home, we only get there a couple of times a year. When we plan our next visit, how do we decide where to spend our precious drinking time? Do we keep checking out new breweries, or do we visit our tried-and-true favorites? It’s a conundrum. Fortunately, it’s a pretty delicious dilemma to have.

While you roll your eyes at our fake “problem” here are a few bonus pictures from our Fort Collins trip:

Inside the Anheuser-Busch Brewery