Inside the Anheuser-Busch Brewery

On Saturday, January 3rd Jeff and I ventured into the belly of the beast: We embarked on the Budweiser Tour at Anheuser-Busch in Fort Collins. We know what you’re thinking and, yes, we normally prefer our brewery quite a bit craftier. But one day we hope to succeed at visiting every brewery in Colorado, and every brewery includes the big ones. We decided on a whim to scratch this one off our list. 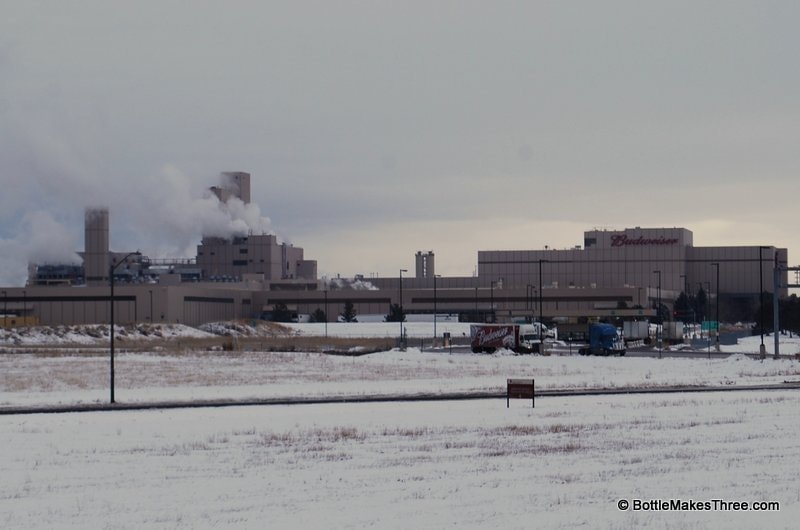 Despite not being a big Budweiser drinker, Anheuser-Busch holds some sentimental memories for me. When I was six years old we moved from Detroit to Tampa, into a house just down the road from the Tampa Anheuser-Busch brewery. I spent most my formative years in the Tampa Bay area, and we frequently visited Tampa’s Busch Gardens. At Busch Gardens when you weren’t taking in the roller coasters or checking out the safari animals, you could tour the Anheuser-Busch brewery, get free samples from their Hospitality House, and even visit the Clydesdales in their on-site hamlet. There were several times in my life where I lived so close to the brewery that the steamy, sweet smell of wort would drift into my daily airspace. Some people hated that smell. I loved it, even before I fell in love with beer. That smell still takes me back home and is a big part of what I love about visiting breweries today.

Sadly, the Anheuser-Busch brewery in Tampa is now closed. It wasn’t long after InBev acquired Anheuser-Busch, that the new Anheuser-Busch InBev sold Busch Gardens, ending a 50-year partnership between the park and the beer. So while you can’t tour the Tampa Anheuser-Busch brewery any longer, there are still 12 U.S. cities where you can visit the home of Budweiser, Bud Light, and other famous beers: Baldwinsville, NY; Cartersville, GA; Columbus, OH; Houston, TX; Jacksonville, FL; Los Angeles, CA; Merrimack, NH; Newark, NJ; St. Louis, MO; Williamsburg, VA; and of course Fort Collins, CO. 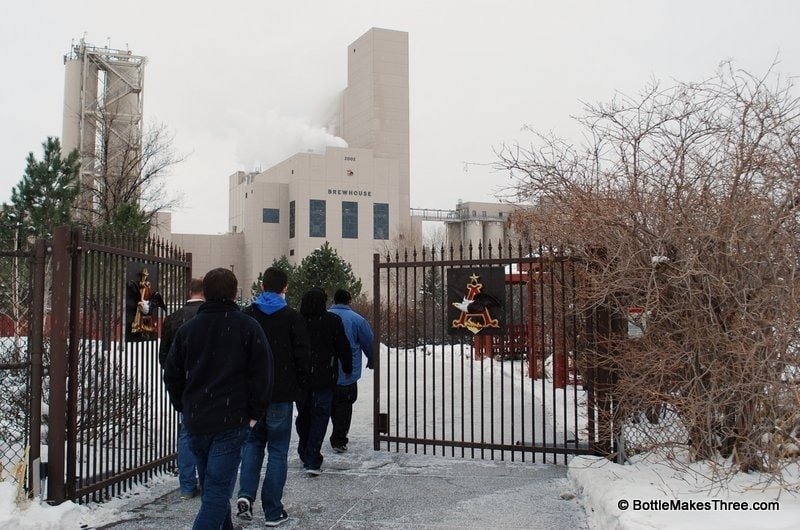 The Budweiser Tour in Fort Collins is complimentary, with a $5 fee only if you want to sample the beer. However, for $25 you can get a ticket to the Beermaster Tour, which gives you behind-the-scenes access, several sample opportunities, and some extra swag. We love nothing more than being treated like a VIP, so of course, we got the Beermaster tour! We would highly recommend this upgrade to anyone taking the Budweiser Tour. As promised, the Beermaster tour was much more extensive, taking us beyond the glass viewing windows to the actual production floor. We had to gear up with hats, safety glasses, and in some areas where it was loud, we had to strap on a closed-circuit transmitter to hear our tour guide via headphones. Yeah, we looked like total doofuses, but when the normal, penny-pinching tour group crossed our path they looked at us all side-eyed and jealous, clearly knowing they made a poor decision to save 20-bucks. The takeaway here is that if you take a Budweiser Tour, go Beermaster or live the rest of your life in regret.

What You See on the Budweiser Tour

On our two-hour tour we saw the Brew House, Starting Cellar, Packaging Facility, Hop Room, Beechwood Aging Cellar and more. Don’t let the fancy names fool you, this is big scale factory brewing. We saw lots of stainless steel equipment, obscenely large tanks, and cans being cranked off the canning line at a rate of approximately one per second. It was a massive industrial sight for sure, but it was cold and lacking in the character that you would find in smaller, craft breweries. Still, it was a marvel to behold. This site fills 225 trucks of beer each day, and 30 rail cars every week. We couldn’t help but be impressed by the sheer size of the plant and the volume of beer they crank out. Here are a bunch of pictures of the equipment, tanks, and tubes that crank out beer 24/7:

At several stops during the tour, we got to taste Bud Light from different stages of production. We tried the unfermented wort, which was sweet and tasted like liquid corn flakes. We had some beer that finished the initial fermentation, called Alpha Beer, which was only one week old and 7.5% ABV. We also had Chip Beer, which was aged and finished Bud Light before it goes through filtering. It registered at 8.5%, but they remove about half of that alcohol before it’s bottled via reverse osmosis. The ABV is taken down to about 4.2% before it’s bottled and shipped to every liquor store, sports bar and frat house in the country. We got to taste the final product, too, fresh off the bottling line. It is true, fresh really is better, so don’t go cellar aging your Bud Light.

In addition to all the Bud Light, we also sampled a few other Anheuser-Busch InBev brands: Stella, Shock Top, Michelob AmberBock, and Shock Top Chocolate Wheat. The biggest surprise was the Chocolate Wheat, which we didn’t expect to like but truly enjoyed. The flavor was rich chocolate and sweet vanilla, reminiscent of a Tootsie Roll, with a creamy finish. It’s a well-done chocolate beer that you could enjoy for dessert. If you want to try it yourself, get some fast. Shock Top Chocolate Wheat is a limited-edition winter seasonal.

Back on the tour, we learned this fun fact: beechwood aging doesn’t do a damn thing to enhance the flavor of Budweiser, no matter what the commercials may have implied over the years. Beechwood is basically a totally flavorless wood that they add to the lagering vessels just so the yeast has somewhere to hang out. Apparently, without the beechwood, the yeast would all just form a big dogpile on top of each other, smothering and killing the yeast at the bottom and causing less-than-desirable flavors. At least that’s what our tour guide Phil told us, so if you disagree, take it up with Phil.

In the end, the Budweiser Tour was informative, entertaining and quite a bit of fun. We each left with some free hats, a tasting glass, and certificates that declared we were now Brewmasters, an accomplishment we immediately added to our résumés. We each also received two free pints of beer in the Biergarten, with the catch that the first round had to be a Bud or Bud Light. We had about two sips of our first round beers and immediately skipped to the second round, which was any AB-InBev product. Jeff had a Goose Island IPA, and I had a Goose Island Matilda. Sorry, Bud… it appears your tour didn’t convert us into Budweiser fans. Maybe next time.

Final Thoughts on our Budweiser Tour

Overall, the Fort Collins Anheuser-Busch brewery was not much like the Tampa brewery I hold dear in my memory. First, technology has made this brewery bigger, faster, and presumably better. Secondly, there are no Busch Gardens Africa theme parks anywhere near Fort Collins, which is a total bummer. But most of all the Fort Collins experience was different thanks to the freezing temperatures and full-on blizzard we had to trek through to return to the Biergarten when the tour was over. Believe it or not, that rarely happens in Tampa. I did get to see one old Tampa brewery relic: While on the tour, we passed a pair of massive, wooden doors, beautifully carved with the Anheuser-Busch logo, which apparently came to Fort Collins from the now-defunct Tampa brewery.

To get information on taking your own Anheuser-Busch brewery tour, visit the Budweiser Tour website.

P.S.: In case you were wondering, no, we didn’t get to see any Clydesdales on this visit. We saw the Clydesdale Hamlet, but the horses were out-of-town. We’re pretty sure they took some time around the holidays to go visit their families. Good for them. They are hard-working horses and they deserve a vacation.