Hellooo friends of Bottle Makes Three!  Yes, it’s been a while. We know we’ve been bad beer bloggers. We took some time off around the holidays, not by choice really, but because we were just so busy. But today we’re back, and we are excited to say that we’re more energized than ever! We can’t wait to get back to sharing our beer adventures! In fact, we just visited a “new to us” brewery this weekend, Evergreen Brewery, and we are ready to share that story with you today. But first, on the way to the brewery we took a slight detour…

Anytime we make a trip to Evergreen our first stop is always at the same place: Evergreen Lake. We love this area so much. In the summer the water is perfect for canoes and kayaks. You can rent them on-site and paddle around and explore the wetlands around the lake. In the winter the water freezes over to becomes a big, beautiful outdoor ice rink. At 8.5 acres, it’s actually the world’s largest Zamboni-groomed lake, perfect for hockey and ice skating. Mostly we enjoy walking the 1.3 mile loop around the shores and taking in the scenery. Even in the winter the views from the Evergreen Lake House are incredible. It’s the perfect spot for family portraits or to take a few late-afternoon selfies…

Although we arrived too late to skate, we wandered around the lake for a while. It was a stunningly beautiful day. We couldn’t pass up the opportunity to get some sunshine and take a few wobbly steps on the ice. Once we had satisfied our need for exploring the lake, we set out to explore something else we love, craft beer, with a visit to Evergreen Brewery.

If you’re not looking for Evergreen Brewery, you could easily miss it. In fact, we missed it the first time and we were looking for them! The taproom is nestled in the second story of a mountain-esque style shopping center, just off Evergreen Parkway, right above Boone Mountain Sports. Even after parking we weren’t immediately sure how to get inside, but maybe that’s just us. I’m sure you’ll find it just fine and be all, “What the heck were those BMT people talking about? This place is simple to find!” Anyhow… we made it. Eventually. 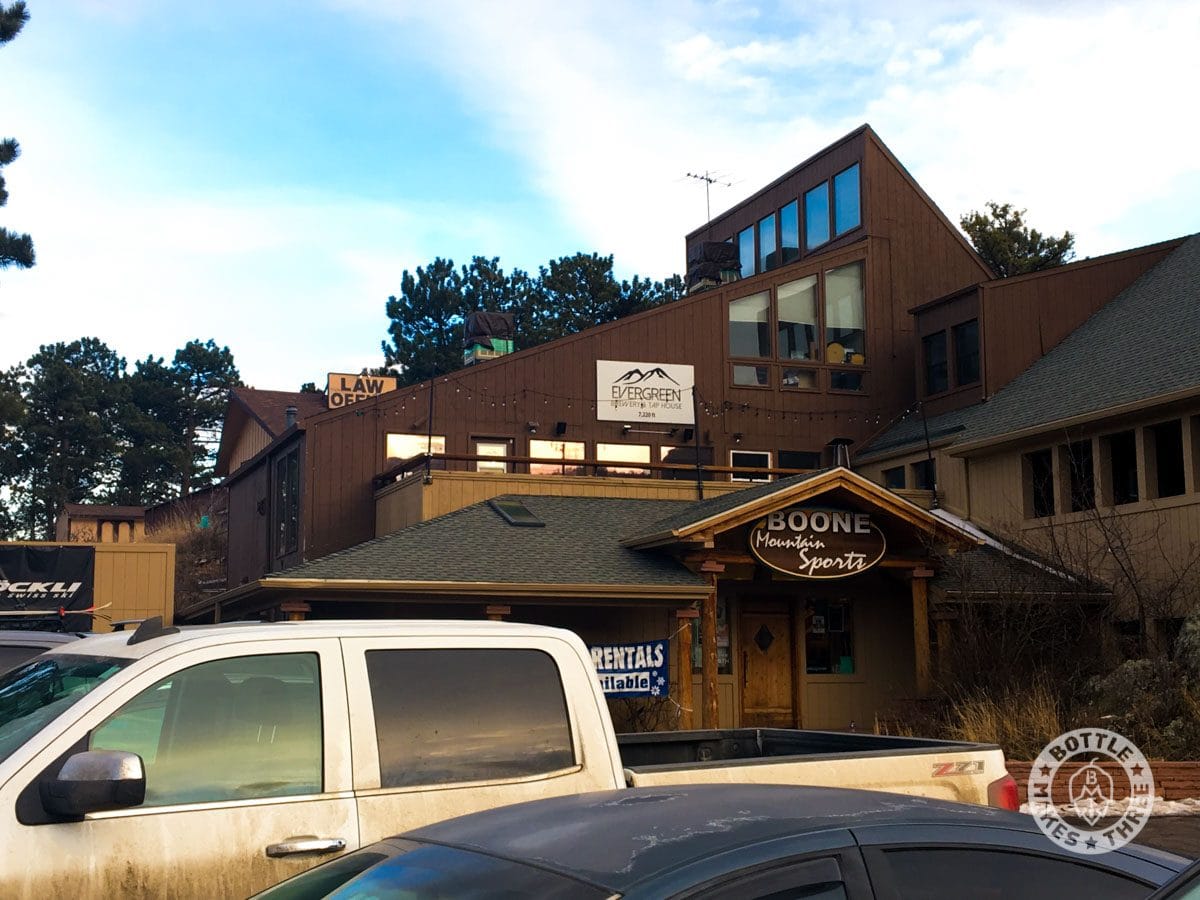 Once inside we immediately got the feeling that this was a locals sort of place. Not meaning they don’t welcome outsiders, but rather, that they were a real, local-friendly, mountain-town brewery. This isn’t a sterile brewery with some fake rustic-looking decor trying to appeal to the ski tourists. Evergreen Brewery was legit rustic, and real Colorado. It’s a no-frills spot with lots of community-style seating. Old skis on the wall act as artwork and a snowboard-turned-chalkboard above the bar lists the daily specials. Evergreen Brewery isn’t trying to look like the locals favorite watering hole. From what we can tell, Evergreen Brewery is the locals favorite watering hole. RESPECT. 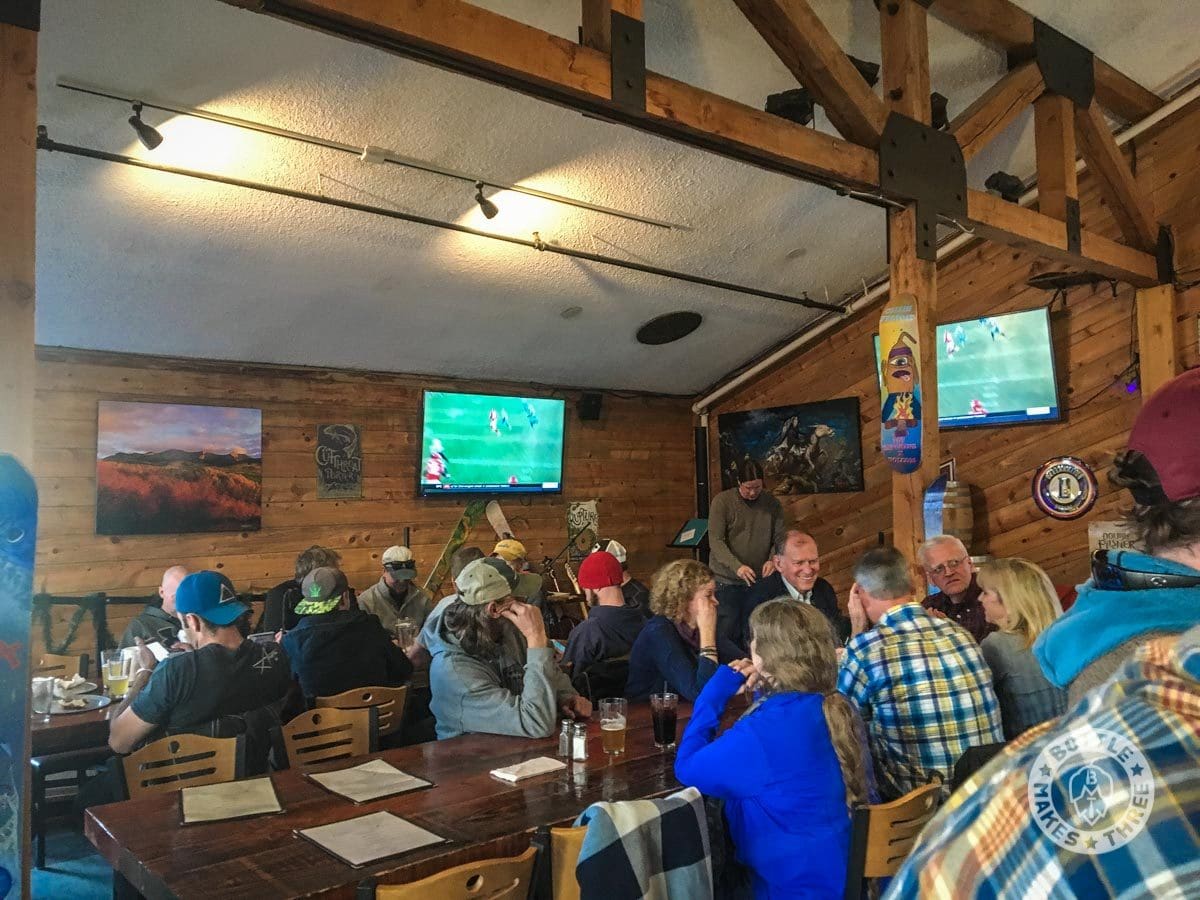 The staff was pretty busy and it was a bit hard to get their attention, so we didn’t waste anyone’s time with tasters or samples. We immediately decided to order two pints, knowing that if we ordered full pours we probably only have time for two pints. Evergreen Brewery’s lineup features about a dozen of their own brews along with a few guest taps, plus a bar with other spirits. It was tough to make a decision when we knew we only had time for two. We were both feeling hoppy so we decided on their two Evergreen Brewery IPAs: the Elk Meadow IPA and the Three Sisters Super Session IPA.

Elk Meadow was a pretty typical American IPA. It was a solid brew and we both thought it was the best of the two brews we sampled. The Three Sisters Super Session IPA was the weaker beer, literally and figuratively. For an IPA there wasn’t much hop bitterness or aroma, and the overall flavor seemed a bit flat. Maybe it was due to the low alcohol, since at 3.9% ABV Three Sisters could almost be categorized as “near-beer.” While we didn’t think the Three Sisters was all that super, there were plenty of other good options to be had at the brewery. If we had more time for a do-over, we would probably try the Bordeaux Barrel Aged Blonde Barleywine or the Merlot Barrel Aged Sour. Their menu featured lots of other styles as well, with seemingly something for every beer lover. It’s a bummer we didn’t have time to try more. Next time.

In addition to beer and spirits, Evergreen Brewery has a food menu featuring elevated pub fare. The soups, salads, and sandwiches all looked delicious; much better than you would expect from a small, off-the-beaten-path brewery. If you are hungry for entertainment, Evergreen Brewery often hosts live music, including a weekly open mic night. There is an upstairs area where you’ll find games, such as pool and darts. However, their best feature may be their patio, where we are told on warmer days you can sit outside and enjoy the views of Bergen Peak and Elk Meadow.

It was great to finally visit Evergreen Brewery. Our only regret was that we didn’t have more time to taste some of their other beers. Next time we head up to Evergreen, we’ll pay them another visit.

Evergreen Brewery is open daily for lunch, dinner, and drinks. They offer a daily happy hour from 3:00 p.m. to 6:00 p.m. plus several other weekly specials and events that you can find on their Facebook page. Check them out for yourself next time you’re in Evergreen, and let us know in the comments what you think.