Written by Jeff in Breweries

If you don’t already believe that the craft beer scene in Denver is collaborative and welcoming to new upstarts, then let us tell you about Black Sky Brewery. Brewer Harry Smith opened Black Sky last fall, just a few blocks from Breckenridge Brewery where he brewed for about 11 years. Not only does Black Sky offer their own amazing craft beers, but they also feature several beers on tap from other breweries with a big focus on the other Colorado craft breweries (like Dry Dock and Ska) as well as those in their own neighborhood (such as Breckenridge, Strange, and Renegade.) It’s difficult to think of any other business model that would have you offer the competitors’ products alongside your own, but it works for craft beer, and as Colorado craft beer drinkers we all benefit.

Our Visit to Black Sky Brewery

We visited Black Sky Brewery on an unseasonably sunny March afternoon, and we may have been the only folks who chose the dim bar over the warmth of the outdoor patio. Yeah, we love the outdoors too, but there’s nothing like sitting at a bar to really learn about a place on your first visit. We soaked it all in, as Ozzy sang over the speakers and the Walking Dead aired on the TV over the bar. This place is heavy metal done right, and we really dug their vibe. It was heavy without being too dark, metal without going overboard. Even if you’re not into the music the place is just plain cool.

We had a hard time picking from the Black Sky menu, given that our go-to styles (IPA and Pale Ale) weren’t pouring, so we just got a sampler of all 8 of their brews. As a testament to how great this brewery is, we fell in love with several Black Sky beers that were styled we don’t typically enjoy, such as the outstanding Percephone Pomegranate Wheat. Percephone, named after the daughter of Zeus who is known to be the queen of the underworld, was hands-down our favorite beer. The pomegranate scent was amazing, but the flavor managed to be fruity without being too sweet. It was amazing. Other stand-outs were the various stouts being poured, 4 in total, that ranged from your basic Oatmeal Stout to a decadent and delicious Blackberry Chocolate Stout that tasted like a delicious dark chocolate blackberry truffle. The Hades Minthia Stout had a refreshing fresh mint flavor, and the Chocolate Mint Pistachio Stout was incredible, too. If you’re a fan of stout you should give them all a try. Hell, even if you don’t think you’re a fan I bet Black Sky can sway you as they did us. I guess it seems fitting that half the beers in this heavy metal joint are black as your favorite Ozzy t-shirt, but the fact that they are so flavorful, complex and delicious will win over even those people who say they don’t like dark beer. 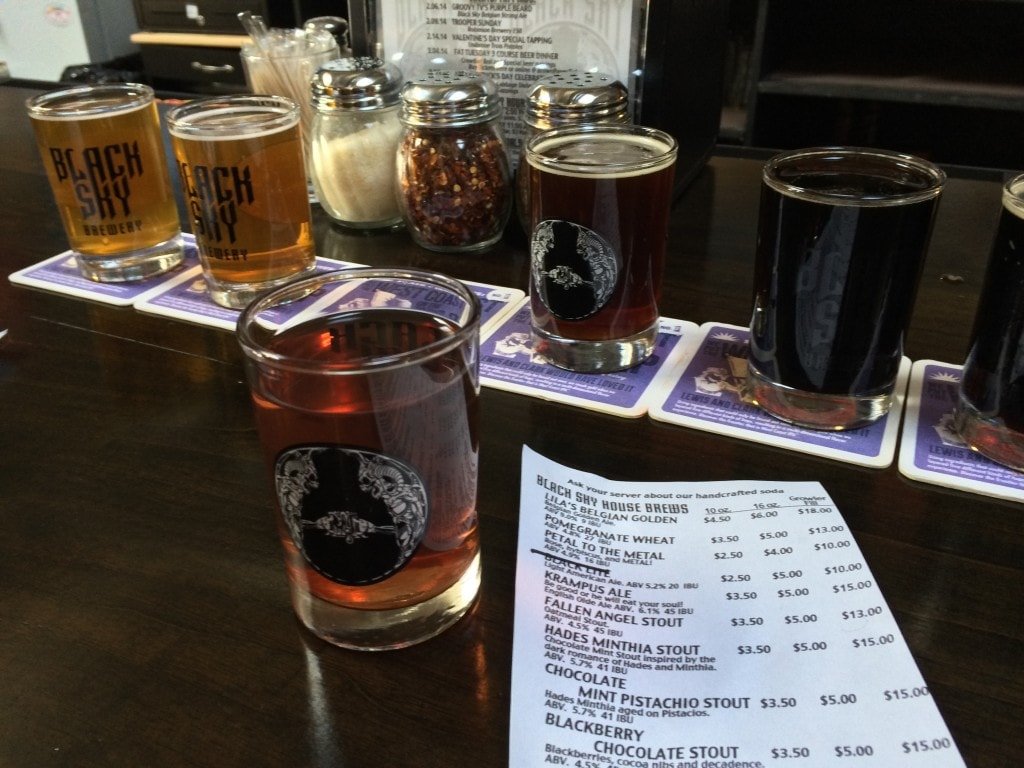 For those not in the mood for craft beer (for shame!) Black Sky also offers cocktails, and if you’re hungry they have a full food menu. We didn’t arrive hungry but once we’d had a few beers and saw several pizzas fly out of the kitchen, we had to get some snacks. We shared a slice of Connecticut-style cheese pizza and a Headbanger Roll. They were so good and paired well with the beers. Mental note: Next time arrive hungry.

We hung out at Black Sky far longer than we anticipated, enjoyed many beers and some delicious food, and we will most certainly be back again. We highly recommend this place for any fans of beer, food, or heavy metal music.

Black Sky Brewery is open Tuesday through Sunday and is located at 409 Santa Fe Drive in Denver. Put on your best Iron Maiden t-shirt and go check them out.